ROAD TO PENSACON THE CONCLUSION 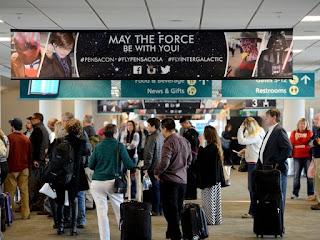 Pensacon 2016 ended Sunday night, but the convention’s care for its guests didn’t stop there. The event had transportation waiting to take us to the airport on Monday.

I can’t say enough good things about Maria and Irene and the entire Pensacon transportation team. They got us wherever we needed to be and got us there in comfort and quickly. There was even one more perk coming my way, but I’ll get to that in a bit.

Just before I came down to the lobby for my ride to the Pensacola airport, Fred (the Hammer) Williamson had come to be driving there. One of the hotel workers, a woman who’d been working tirelessly all weekend long, was stunned to see one of her favorite movie stars in her hotel.

Maria held the van for a few moments so that the women could meet Fred and take a picture with him. Fred was every bit as gracious as I had seen him be during the convention. The woman says that moment with me made the entire weekend worthwhile for her.

My van was next. That’s when Maria and Irene told me that all I had to do was show my Pensacon guest badge to the TSA checker to enter the expedited security line. I didn’t have to remove my jacket or my shoes. That was a major plus for me because, at my advanced age, there’s no guarantee that, if I bend down to remove my shoes, I’m gonna be able to get back up.

Okay, I’m exaggerating, but it was still a cool moment. I’ve since learned that, for a nominal fee, you can register to always go to the expedited line when you travel. That’s a payment I will gladly make, even though I question why such exceptions are made. I guess terrorists don’t have an extra hundred bucks in their budgets.

Because direct flights are rare birds, indeed, I would be flying to Dallas first and then onto Cleveland. I got to the airport an hour or so before my flight would board. Williamson was waiting for the same flight, so we chatted a bit more. He was one row behind me on the flight, so we didn’t get a chance to continue our chat, but it was great having some extra time with him. If Fred hasn’t already written a book about his life and his careers in football and the movie industry, he should. I’d buy it.

As on the second leg of my flight to Pensacola, I was seated next to interesting people on both this flight to Dallas and the flight from Dallas to Cleveland. On the Dallas flight, I was sitting with the acting police chief of the only Native American reservation in Alabama. My immediate reaction?

It turns out there isn’t much serious crime in his territory. Just a few calls a day and those are usually related to the casinos on the reservation. But his is a strong community where neighbors look out for one another and one another’s children. His police force - they are federal agents - are well trained and always getting more training. So, maybe not so great for TV, but pretty swell for the community itself.

We landed in Dallas early and with almost three hours to wait for my flight to Cleveland. I had time to grab a meal and read Michael Eury’s Back Issue #83 [$8.95] and #86 [$9.95]] from cover to cover. The TwoMorrows magazine is among my top ten favorite magazines, though I tend to read its issues out of order and slowly. 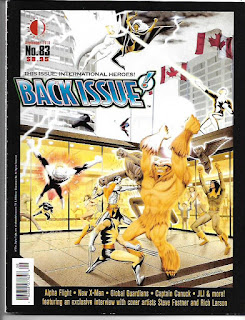 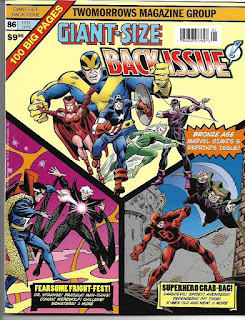 Issue #83 [September 2015] was devoted to international heroes like Alpha Flight and the Global Guardians. There were also articles on the New X-Men, Captain Canuck, Justice League International and the Spider-Man adventures created in and for the UK audience. Lots of interesting stuff in this issue.

Issue #86 [February 2016] focuses on Marvel’s Bronze Age giants and reprint comic books. There’s an obsessive attention to detail when it comes to listing these comics and fascinating history from folks who worked on them. Scott Edelman, Roger Stern and Irene Vartanoff are among the Marvel staffers interviewed for this issue. My pick for the best article in the issue was Jerrod Buttery’s “The House of Recycled Ideas,” but my favorite feature was “The Giant-Size Marvels That Weren’t” by Eury and Rich Fowlks. As a special treat for me, they included the “cover” of Giant-Size Giant-Man.

Digression. When I turned scientist Bill Foster into a giant-sized super-hero, I wanted to call him Giant-Man. Apparently, Giant-Man did not sell well in the 1960s, so the name was nixed and he ended up being called Black Goliath. In recent years, I’ve joked that it would have been cool to see an annual titled Giant-Size Giant-Man. Eury and Fowlks made my day by bringing my joke to life.

I recommend Back Issue in general and both of these fine issues in  the specific. Check them out.

On the flight to Cleveland, I was sitting next to one of the guys who run the Fin Feather Fur Outfitters stores and firing ranges in my area. He and his group were coming back from a buying trip. He was very kind in answering my questions about the business. Their  Ashland Ohio place has a hunting range and is next to the “famous” Grandpa’s Cheese Barn. We pass the huge highway signs for both of these places whenever we drive to Columbus...and we always say we should go to Grandpa’s. My new acquaintance invited me to try out their firing range - I’ve never fired a gun in my life - and check out Grandpa’s, thus knocking two items off my bucket list with one trip. A nice guy.

My flight arrived in Cleveland on time with the airport’s baggage claim area being more efficient than usual. I texted Sainted Wife Barb, who was waiting in the nearby cell phone lot, and she picked me up within a few minutes of my getting my luggage.

My trip to Pensacon was over, but it was one of the best convention experiences of my career. If they want me back, I will definitely return to Pensacola.

I’m home and working for the rest of March, but I will be a guest at two Ohio conventions in April: Gem City Comic Con in Dayton on April 2 and 3...and Fantasticon in Toledo on April 16 and 17. I’ll have more on these events in the next couple weeks.

Coming up over the next several bloggy things will be my reports on Wizard World Comic Con Cleveland and my visit to the cool Cleveland State University Comic Book Club, as well as a few special reviews columns. I hope you’ll join me for those.

Posted by Tony Isabella at 7:22 AM