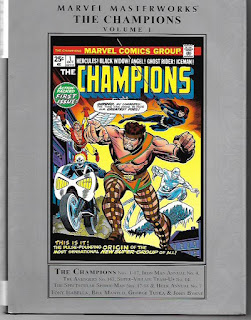 Bloggy Tony is a guest at the spectacular Pensacon. It’s February 19, Friday afternoon and the first day of the event, which is being held at the Pensacola Bay Center. Tony’s table is on the “Artists Halo” that overlooks the lower arena where the main vendors area is located. Switching to a more comfortable past tense, here’s what he did from his lofty perch...

I signed a great many Isabella-written books, comics and magazines. This sometimes happen when I go to a convention in a place where I have never gone to a convention previously. I tried to keep count, but failed in the midst of many great conversations with fans and guests. My best guess is I signed well over 300 different items and maybe as many as twice that number.

I handed out over a hundred fliers advertising two collections of my 1970s writing: Marvel Masterworks The Champions Volume One (now on sale) and Black Lightning Volume One (coming soon). These fliers were the ones I’ve posted in previous bloggy things. Designed by my lifelong friend Terry Fairbanks, they are printed on glossy paper and are signed by yours truly.

I also gave out little sheets containing the URLs of all my online venues. Here’s a list of them:

I also did something completely different: 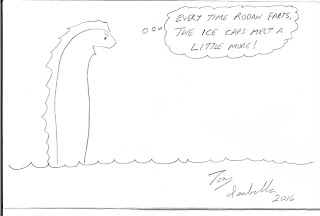 Though I am not an artist, I started doing badly-drawn sketches and gave them away to fans who came to my table. As you can see above, I did Godzilla sketches and added gags to them.

Stop right there. I know the monster in the drawings doesn’t look like Godzilla. I can’t draw arms. I can’t really draw anything. But it was Godzilla’s “voice” I heard in my head as I drew these awful sketches and came up with the gags for them.

The “Godzilla” sketch above is one of several I wrote on the theme that Rodan is a filthy, disgusting, lice-ridden bird. Why there’s such bad blood between Godzilla and Rodan is unknown to me, but I bet Godzilla has good reasons for trash-talking Rodan.

I did some “Godzilla” sketches with political themes. There were a few “Feel the Burn” gags, but, as in real life, Donald Trump was a much easier target: 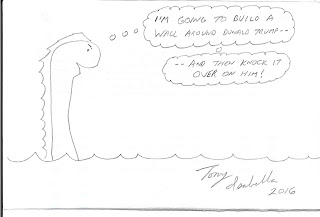 I did some “Godzilla” shout-outs to my fellow Pensacon guests like Dave Dorman and Claudia Christian. My friend Alexi Vanderberg, who was mentioned in yesterday’s bloggy thing and who was supervising Christian signing her memoir at the Word Fire Press booth, gave her a sketch like the one recreated below.  As I learned when I spoke to her on Saturday, Claudia got a kick out of it. 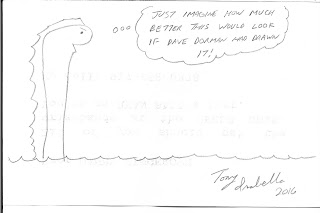 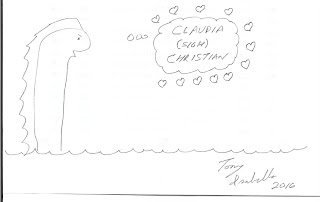 Badly-drawn as these sketches were, the fans loved them. They would swing by my table on a regular basis to see whatever new ones I had done. After the convention, I received e-mails or notes telling me they had hung the sketches in their homes or offices. Which I guess is the equivalent of taping your child’s less-than-refined drawings on your refrigerator.

My plan going forward is to have real artists draw up these silly little gags of mine and produce small prints of them to sell when I attend conventions. If you think you’d like to collaborate with me on such frivolous fare, email me with a link to samples of your work. I’ll get back to you quickly.

Since I’m still getting over the bout of con crud I contracted at Wizard World Cleveland last week, today’s bloggy thing is a short one. But I’ll be back tomorrow with a full report on my Saturday at Pensacon 2016.

Posted by Tony Isabella at 3:21 PM