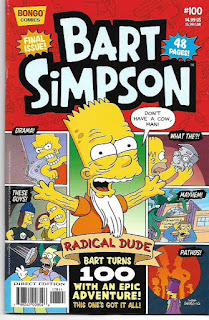 Every other month, on my Facebook page and on Twitter, I post about things that piss me off. Except when I’m out of town at conventions and such, I post one such item a day. People seem to enjoy my pain and/or annoyance, so, a few days after the end of a month of these posts, I collect them for this bloggy thing of mine. Here are the TTPMO items for February with additional comments in italics:

February 1: Editorial cartoonists commenting on the shapes/styles of the new Barbie dolls and using transsexuals as the punch lines. Pardon the expression, but you’re being dicks.

February 2: Opening the pre-viewed copy of A History of Violence I bought from Blockbuster a long time ago and finding there’s no disc in the case. I have too many unwatched DVDs. I just got a copy of the movie via my local library.

February 4: Bongo Comics is canceling Bart Simpson with issue #100. They should replace it with an ongoing Lisa Simpson title. But I have to admit that last issue was pretty great.

February 5: Magazines and organizations that send “final” renewal notices on a weekly basis. I suspect they don’t know what the word “final” means.

February 6: Bernie/Hilary supporters who savage the candidate they don’t support. Either one would make a better President than their Republican opponents. If you think otherwise, you haven’t done your homework.

February 7: People who post “prison rape” comments or jokes on my Facebook page threads. Such posts are NEVER acceptable on my page.

February 8: Cyborg wearing a Black Vulcan shirt in his mini-series. He’s now my least favorite member of the Justice League.

February 9: Plumbing problems. This time, it’s two hot water valves that can’t be completely shut off. So it’s a double whammy. First, we pay the plumber. Then, next month, we pay the much higher than usual water bill. The plumber did the job quickly and a whole lot less expensively than we had feared.

February 10: The “bully” contingent of the Republican presidential field: Trump, Cruz, Christie. Not an ounce of decency or humanity in any of them.

February 11: Athletes and entertainers blessed with talent, wealth and fame who abuse such gifts via debauchery, drunkenness, drug use and other bad behavior.

February 12: The disgustingly obscene amount of money squandered on political campaigns. Imagine all the good uses such money could be put to instead.

February 13: People who believe in “religious freedom” but only for their religion.

February 14: People who claim to be pro-life when they are clearly only pro-fetus..

February 15: Bigots who try to position their bigotry as “religious freedom.” God and Godzilla both find you loathsome.

February 16: Sick days. I consider any illness an affront from the universe because of how it limits what I can accomplish that day.

February 17: Comic strips that run sideways, especially online. It is a major pain to turn my monitor so I can read them.

February 23: Advertising that wraps around a newspaper’s front page and obscures it. I have to remove the sheet before I can read that front page.

February 24: John Kaisch. He’s no moderate. His record on women’s health issues is ghastly and he undermines public education to benefit his charter school donors.

February 25: Getting poked on Facebook. It’s annoying and not even remotely cute. I deeply resent even the second it takes to ignore such nonsense. Poke me at the wrong time and you get un-friended.

February 26: Republicans who think the late Antonin Scalia should vote on pending Supreme Court cases from beyond the grave. I wish I was making this up.

February 29: Concrete floors at conventions. Yeah, I know they come with the venues, but, man, are they hard on my back, feet and legs.

Posted by Tony Isabella at 2:02 PM