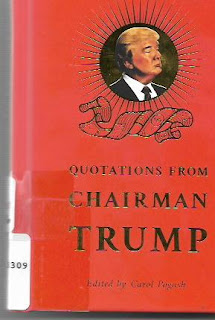 Edited by all-terrain writer Carol Pogash, Quotations from Chairman Trump [Rosetta Books; $14.99] is a literally pocket-size hardcover of 192 pages. Almost all of those 192 pages feature actual quotes from the despicable Donald Trump. As a result, what was most likely created to be a humorous novelty item is instead perhaps the most horrifying book of the year.

Fear is knowing these stupid and vile quotes were said by a more-or-less human being. Terror is knowing there are people who support this malicious individual not in spite of the awful things he says but because of them. This is what the continued devolution of the Republican Party has wrought.

I don’t recommend this book, but I don’t not recommend it either. It is a compendium of reasons why no one in their right mind should vote for Donald Trump. If Trump fades from human memory, as I most sincerely hope he does, this book might be a nice collectible for devotees of political oddities. If he does become President and  ushers in the Republican Apocalypse that will surely claim all life on this world, putting this book in a time capsule will explain to future interstellar visitors what happened to our world.

It will be a while before I can resume writing my usual full-size bloggy things, but I’ll try to post short bloggies like this one as often as I can. Just to tide you over.

Posted by Tony Isabella at 8:50 PM