ROAD TO PENSACON PART ONE 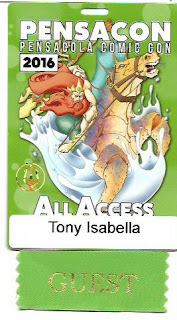 Pensacon 2016, the Pensacola Comic Con, took place on the weekend of February 19-21 at the Pensacola Bay Center and a number of other locations near the Bay Center. I was invited to be a guest at the show. Thinking about leaving Ohio in February for Florida made it a no-brainer for me to accept that invitation.

Road to Pensacon stars Tony Isabella as the fast-talking Bob Hope, artist John Dell as the debonair Bing Crosby, and let’s say Claudia Christian as the breathtakingly beautiful Dorothy Lamour. For this year’s convention and public appearance reports I’ll be channeling the classic “Road to” pictures. Just because I can.

I was invited to Pensacon by convention chairman Mike Ensley. I had heard many good things about the event from friends, but was still surprised by how amazing my experience would be. While I don’t want to slight any of the many fine conventions I have attended in the past and are scheduled to attend this year, Pensacon might be the best-run convention that’s not San Diego’s Comic-Con International. I’ll have more on this in a bit.

Air travel being what it is today, I wasn’t going to have a direct flight from Cleveland to Pensacola. Still, the flight to transfer city Charlotte left on time and arrived early. It was an uneventful flight and the early arrival gave me more than sufficient time to get to my connecting flight. Alas, the Pensacola flight was delayed due to a flight attendant who became ill, necessitating some quick cleaning before the passengers could board.

I had a great time on the flight to Pensacola. I was sitting next to a man named Darius, who was on his way to a conference on how to bring neighborhoods together. He was an avid reader of comics when he was younger and still reads the occasional graphic novel. I have a growing interest in neighbors due to my horror at how Cleveland let its neighborhoods go to heck while it was building play palaces for the rich. We talked about families, village-like neighborhoods where the adults all look out for each other’s kids, living a good and high-minded life, embracing hope instead of fear and even the deterioration of the neighborhood where I grew up. It was a great talk and brought out some uncharacteristically smart comments from me. Darius seemed truly impressed by what I said. I wonder if I should write a book lying out my philosophy of life. Especially if I can include lots of humorous illustrations. I suppose I’ll have to add this notion to my long bucket list of things I want to write before I kick the bucket.

When I disembarked at the Pensacola airport, I saw Pensacon banners hanging all over the place. I saw circular signs containing quotes from science fiction movies. I saw that the arrival/departure gates had been designated “stargates” by the airport. That was my first inkling as to how involved the entire city was in this convention. I would later learn that several area restaurants and taverns were doing special themes for the weekend: Star Wars, Mallrats, vampires and werewolves, Rocky Horror, superheroes/supervillains, Hogwarts School, horror, Tron, Game of Thrones, and more.

At the baggage claim, I was greeted by smiling Pensacon volunteers holding up signs with my name and those of other convention guests. There was a vehicle waiting to whisk me to Crowne Plaza hotel. If there had been a wait for a vehicle, the convention had a room in the airport with drinks and food for its guests. I was stunned by all this effort.

It didn’t stop there. When I got to the hotel, the convention had already checked me into my room. If, at any time during the event, I would need to go to a store, restaurant or anywhere else, there were Pensacon drivers on call 24/7. That amazing level of treatment continued throughout the weekend and even beyond my Monday morning ride back to the airport.

At the hotel, I met Basil Gogos, the legendary artist who painted over fifty covers for Famous Monsters of Filmland back in the day. I also got to spend a few minutes with newsman Julio Diaz, a dear friend since the days of the original Tony Isabella Message Board at World Famous Comics.

As much as I wanted to explore Pensacola, I was exhausted from my long day of airport sitting, flying, more airport sitting and more flying. I spent Thursday night resting in my room. I read the new issue of Rick Norwood’s Comics Revue, watched the 199th episode of The Big Bang Theory, did a bit of work for a client, called Sainted Wife Barb and then got some much needed sleep. 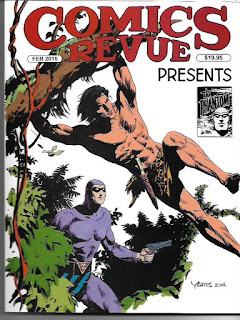 A few words about Comics Revue #357-359 (Manuscript Press; $19.95). This February 2016 issue is yet another reason why Comics Revue is one of my two or three favorite comics magazines. Every bimonthly issue features over a hundred pages of some of the greatest comics strips of all time. My favorites among them would include Tarzan, the Phantom, Buz Sawyer, Rick O’Shay, Steve Canyon and, especially, Modesty Blaise by Peter O’Donnell and artist Enrique Romero.

Modesty Blaise is one of my four favorite adventure strips, right up there with Dick Tracy, the Phantom and Terry and the Pirates. Reformed and retired criminals Modesty and Willie live by a code of honor that would do any hero proud. In this issue’s opening chapter of “Durango,” their intricate plan to rescue some friends meets an unexpected obstacle. I don’t doubt they will get out of this jam, but I can’t wait to see how they get out of it.

That’s all for now. I’ll be back tomorrow with my report on day one of Pensacon 2016.