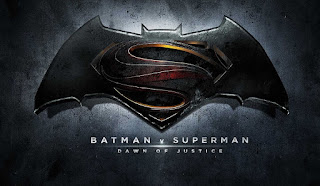 During the course of any given month, I am asked many questions. I answer some of them in e-mails, posts to mailing lists and posts to my Facebook page. As time permits, I’ll continue doing all of the above. But, because time does not always permit, I’ll try to talk about these subjects in this brand-new feature of the bloggy thing. Let’s see how many I can cover today...

The title is misleading. I am terribly disappointed that, instead of the legal drama I was anticipating, this turned out to be another dark take on classic DC Comics characters with an excess of violence, callousness and teeth-gritting. I’m thinking of filing a class action suit to demand Zack Synder and anyone who approved the movie title go back to school to learn the difference between “v” and “vs.” Just kidding, but not entirely.

I haven’t seen the movie. My current plan is to watch it when it’s released on Blu-ray. That was also my plan for Man of Steel (2013),  but the more I heard about the movie, the less I wanted to subject myself to it. I made the decision not to watch Man of Steel when I requested and received a copy for my local library. I returned it unwatched.

Although the reviews of Batman v Superman have been overwhelmingly negative, there are enough favorable comments that I haven’t ruled out watching the film when I can get it from my library months from now. I think my favorite negative review to date claims the movie is so bad it’ll make you hate the entire Justice League, including the members who weren’t in the movie. Harsh.

I’ve read and heard favorable reviews from folks who aren’t comics fans. A bunch of fans on a comics art collecting list also seemed to like it. Then again, Mark Evanier quipped, “To honor the name of the late Bill Finger, maybe we should be campaigning to get it OFF the Batman movies.”

There are super-heroes who work with dark treatments, but I can’t imagine Superman or Wonder Woman being among them. Well, I can, on account of I’ve seen it in some not particularly entertaining comic books, but I don’t like to imagine it. Going dark with Batman makes a bit more sense to me, but not when he’s portrayed as a psychotic or a sociopath. It still wouldn’t be my preferred choice...and this may be why no one asks me to write Batman.  Well, maybe that and because, in doing so, I would totally lift Kite-Man to the heights that misunderstood villain deserves.
If I do watch Batman V Superman: Dawn of Justice, I won’t review it unless I can find something to say about that a dozen other critics haven’t already said. Or unless it turns out to be a whole lot more enjoyable than I expect.

I write negative reviews for the simple reason that it helps gives my readers a base line for judging if they would like a comic book or graphic novel I’ve recommended or panned. While I would caution anyone from assuming I’ll like or dislike something, I would hope my reviews help you in your buying decisions.

As to why I don’t write more negative reviews, it’s simply because I don’t find them as much fun to write. I write them when I think I can make an educational or societal point and, I confess, when I find something hilarious in a comic book or graphic novel’s failed execution. But I’d rather introduce you to the really good stuff. That’s where my heart is.

I don’t have a clue how or if DC’s Rebirth event will affect Black Lightning. I expect DC will bring me up to speed on this, but, even if they do, I likely won’t be able to write about it. I’m afraid I can’t answer every question you ask me, though I will certainly try to answer them when and if I can.

BLACK LIGHTNING, DC AND ME

While overall negotiations with DC are progressing and I very much enjoy my occasional conversations with various DC brass and staff, we’re not at the stage where I can announce anything. I remain relatively optimistic that day will come.

For those wondering where they can meet me, I’m appeared as a guest at two conventions in April.

The first is Gem City Comic Con in Dayton, Ohio on Saturday, April 1 and Sunday, April 2. You can learn all about this comics-centric event by going to the show website...and you read my personal take on my forthcoming appearance here.

The second is FantastiCon in Toledo, Ohio on Saturday, April 16 and Sunday, April 17. I’ll be writing about this appearance next week, but, in the meantime, you can learn about this convention by going to the event’s website.

In May, I’ll be a guest at Canal Fulton’s The Toys Time Forgot for Free Comic Book Day, Saturday, May 7. I will have more details for you closer to the end of April.

Also in May, I’ll be a guest at the East Coast Black Age of Comics Convention, home of the Glyph Awards, in Philadelphia. The Awards will be presented Friday evening, May 20, and the convention itself will be on Saturday, May 21. This one of my favorite conventions. I’m looking forward to returning there.

That’s it for now. I’ll be back tomorrow with either the start of my multi-part Wizard World Cleveland report or one of three single-day pieces I’ve been working on. Thanks for stopping by.

Posted by Tony Isabella at 7:33 AM