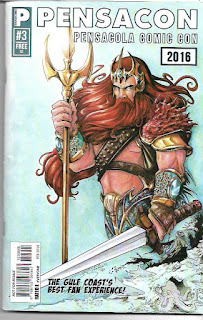 On its first day, Friday, February 19, Pensacon didn’t open to the public until 1 pm. Which gave me plenty of time to do this and that before being driven to Pensacola Bay Center.

I had breakfast at the hotel restaurant where the staff had donned kind of sort of cosplay outfits. The hostess wore a Superman emblem shirt with a tutu. She also had a mask, but she wore it on top of her head. When I cautioned her that she needed the mask to protect her secret identity and her loved ones, she said the mask covered up her pretty eye makeup. Sigh. These young super-heroes today. I don’t know what the multiverse is coming to.

I spent the morning answering some questions for a future interview in Alter Ego and doing some reading. I started with Pensacola’s Downtown Crowd, a free monthly tabloid newspaper that devoted its cover and two interior pages to Pensacon. There were also a number of ads for restaurants and taverns that were doing promotional tie-ins with the convention. Pensacola gets behind the event in a big way, which is good for the con and good for the city. 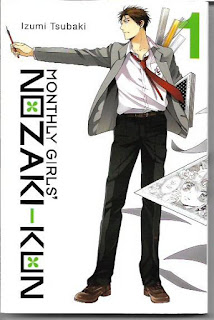 I read the first book of Izumi Tsubaki’s Monthly Girls’ Nozako-Kun [Yen Press; $13]. High school student Sakura has a crush on fellow student Nozako...and tries to express this by telling him she’s his fan. Turns out Nozako is a shojo manga artist and he thinks she’s talking about his manga. This being a romantic comedy, Sakura ends up becoming one of Nozako’s assistants. I like the premise of this manga because I’m a sucker for fiction set in the comics industry, but the individual stories are often too short and too unfocused to deliver satisfying humor. The book is also hampered by a problem I have with many manga works: the characters aren’t visually distinct enough for me to instantly tell them apart. No recommendation this time out, but I will read the second volume and see if I like that book better than this one.

On my Kindle Fire, which I’ve finally started using, I also read a couple chapters of The Talented Miss Highsmith: The Secret Life and Serious Art of Patricia Highsmith by Joan Schenkar [St. Martin’s Press, 2009]. Though I’ve never read any of Highsmith’s novels or short stories, I became interested in her when I learned she wrote comic books in the 1940s. By most accounts, she seems to have been a most unpleasant person, but she makes a fascinating subject for  a biography.

On to the convention... 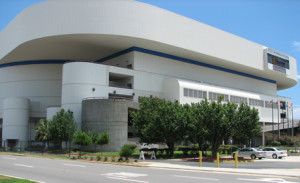 The Pensacola Bay Center is more an arena than a convention center, though it affords ample room for a convention. The first floor is an arena where various sporting events are held. That was the main dealers room for Pensacon. I didn’t spend a lot of time there, but I did get to say “hi” to Sensei Neal Adams, chat with my old buddy Mike Grell and briefly renew my acquaintance with Alexi Vandenberg, who I knew when I lived in New York. He was there with Word Fire Press, publisher of many fine books and novels.

The second floor of the center had the Pensacon panel rooms and its large celebrity autograph area. To get to the latter, fans had to walk down a long circular corridor. I’m not saying it was a bit of a hike to the celebrities, but I saw a man in tattered clothing and a week’s beard stubble crawling down the hallway asking for water. Photo opportunities with the celebrities were generally held in the dealers room.

What I dubbed “Artists Halo” was the third floor. It ran all around the circumference of the center. You could look down on the dealers room. Outside the halo was a food court offering various fast foods and beverages, some of them alcoholic. Though I did not imbibe of any spirits, I did develop a liking for the hamburgers. They were not worth $6 each, but they were tasty.

In addition to the areas open to the public, Pensacon had a really nice green room for guests of the events. It was well stocked with water and other beverages, snacks and even catered food from one of the local restaurants. It was one of the nicest green rooms that I have ever seen at a convention.

Throughout the convention, dozens of volunteers were there to help the guests and the fans. If guests needed someone to watch tables while they appeared on panels or took care of other business, the volunteers would cover that. If a guest couldn’t get away from his or her table, the volunteers would bring them whatever drinks and food they needed. I was helped by so many volunteers that I never got the chance to write down more than a few of their names. I’ll talk more about them down the line.

My table was next to comics artist John Dell on my right and famed Star Wars Dave Dorman on the left...which isn’t the usual political configuration of me and my old friend Dave. Both were great company during Pensacon. John deserves special praise for listing to more of my old stories than any human being should be subjected to over such a short period of time.

So what did I do at Pensacon? We’ll talk about that tomorrow as my report on the convention continues.