BACK IN THE SADDLE AGAIN 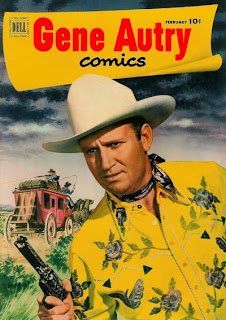 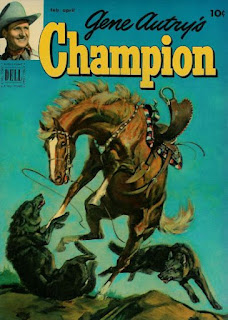 ﻿It’s been several days since I’ve kicked off this blog with a comic
book from my birth month [December 1951], so today I give you one
issue starring singing cowboy Gene Autry and a second one starring
his horse.  Here’s what Wikipedia says:

Orvon Grover Autry (September 29, 1907–October 2, 1998), better
known as Gene Autry, was an American performer who gained fame as
The Singing Cowboy on the radio, in movies and on television for
more than three decades beginning in the 1930s. Autry was also
owner of the Los Angeles/California Angels Major League Baseball
team from 1961 to 1997, a television station and several radio
stations in Southern California.

Although his signature song was "Back in the Saddle Again," Autry
is best known today for his Christmas holiday songs, "Here Comes
Santa Claus" (which he wrote), "Frosty the Snowman," and his
biggest hit, "Rudolph the Red-Nosed Reindeer."

He is a member of both the Country Music and Nashville Songwriters
halls of fame, and is the only person to be awarded stars in all
five categories (Film, Television, Music, Radio, Live Performance)
on the Hollywood Walk of Fame.

Dell’s Gene Autry Comics #60 [February 1952] was a 36-page issue
with a photo cover.  In the 24-page “Double-Trouble,” Autry is on
the trail of missing Wells Fargo gold shipments and the killer who
shot two messengers.  The story is drawn by Nicholas Firfires, who
drew many western comics for Dell.

The Grand Comics Database doesn’t identify the writer of this tale,
but writers who worked on the title during this time would include
Gaylord DuBois, Philip Evans, Paul Newman and Eleanor Packer. Evans
also wrote for the Gene Autry newspaper strip.

Gene Autry's Champion #5 [February-April 1952] had a cover painted
by Sam Savitt and three Champion stories, all drawn by Mo Gollub.
The GCD has not yet identified the writer or writers of these three
stories.

Keep reading this blog for more comics from the month of my birth.
There were a lot of them.

I’ve been reading Amazing Spider-Man and related titles and seem to
be just about current with those.  I’m also reading Doctor Who and
have quite a ways to go before I’m current with those IDW comics.
Thirdly, I’m reading various pre-2009 X-Men mini-series and am only
up to those whose titles start with the letter “M.”  Along with the
other comics, books on comics, graphic novels, and manga I’ve been
reading.  Being underemployed has some minor advantages.

While I won’t be writing issue-by-issue reviews of the older comic
books, I will have some notes on most of them.  First up is Amazing
Spider-Man #651-682 and there are SPOILERS AHEAD...

Dan Slott’s doing a good job writing the title.  He doesn’t hit it
out of the park or even get on base all the time, but, most of the
time he delivers an enjoyable story.

I like Peter Parker’s new job with Horizon Labs.  It makes perfect
sense to have him use his scientific smarts to earn a real healthy
paycheck.  Slott thinks bigger than I do.  Back when Jim Salicrup
was editing Spider-Man, I suggested Parker become a science writer
for the Daily Bugle.  I like the Horizon bit better.  Sadly, since
readers can’t possible relate to a successful scientist any better
than they could relate to Peter being married to a actress/model,
it’s only a matter of time before Mephisto returns to offer our
hero a new deal of some sort.

I hate Phil Urich as the Hobgoblin.  I actually liked Urich’s too-
brief time as a heroic Green Goblin and I don’t recognize that guy
in this new evil guy.

The death of Marla Madison? Cheap shock value made even more so by
Jonah not learning a damn thing from it.  His hatred for Spider-Man
now reaches insane proportions.  He’s acting irrationally and it’s
time to retire him from the series.  Or have him move in with his
dad and Aunt May.  Let the hilarity ensue.

Also not wild about Spider-Man’s memberships in both the Avengers
and the FF.  Too much, even given Horizon’s loose work arrangement.

Did I mention how much I like Peter working/succeeding at Horizon
Labs?  Because I really do.  Don’t want that lost in the negative
comments.

I also liked Slott’s handling of Peter’s relationship with Carlie
Cooper and its hopefully not permanent dissolution.  She’s a gutsy
and smart character and Peter was an idiot for not being more open
with her.  Some things never change.  In any case, her reasons for
breaking up with him made perfect sense for her character.  I like
her as much as I like Mary Jane.

Following the death of Marla Madison, Spider-Man vowed that, while
he was around, which I take to mean in the vicinity of whatever was
going down, no one dies.  It’s a unrealistic vow, but, you know, I
like it a lot...and since writers can write whatever they want to
write, more or less, I’d love to see Spidey keep that vow.  There
has been enough collateral death in Marvel comic books of late and
way too much mass killing of civilians.  Let’s encourage Slott and
other writers to be clever enough to figure out how to make certain
no one dies on Spider-Man’s watch.  Slott has already done really
good stuff with this premise.  He should keep it up.

Spider-Man lost his spider-sense for a while.  Because he acted in
a heroic and self-sacrificing manner.  That made for some exciting
moments, but I’m glad his spider-sense was restored.  Spidey just
isn’t really Spidey without it.

While I might not like Spider-Man being a member of the FF (Future
Foundation), I like his being part of the FF family.  Sometimes the
families we build for ourselves are better and more loving than the
ones we’re born into.

In a similar vein, while I might not like Spider-Man being such an
active Avenger, his two-issue team-up with the students of Avengers
Academy in issues #661 and #662 was great fun.  It reminded me of
the Chris Claremont and John Byrne run on Marvel Team-Up way back
in the day.

“Spider Island” was a decent big-ass story.  It delivered a whole
bunch of fine moments along the way, most notably Carlie Cooper’s
stepping up to the plate in a major way.  However its multiple and
not particularly interesting villains became tedious quickly and,
counting the mini-series and one-shots, the story ran around twice
as many issues as it should have.  I’ll write about some of those
mini-series and one-shots tomorrow.

Following “Spider Island,” Slott wrote a fine two-issue story with
the Vulture.  It was a somewhat different take on the long-flying
villain and I thought it was terrific.

My jury of one is still out on the Doctor Octopus and Sinister Six
stuff that has dominated Amazing Spider-Man of late.  I still wish
the Sandman had remained reformed, but that’s not a deal-breaker.
Earth-threatening peril goes beyond what I believe is Spider-Man’s
natural story territory, but the beauty of smaller stories has been
lost on editors, readers and writers suckled on an unhealthy diet
of Hollywood eye-candy and video games.  It’s true, young ones, I
am that cranky old man who turns the water hose on you whenever you
drunkenly pass out on his lawn.  Now in my day...