A LIFE IN MANGA 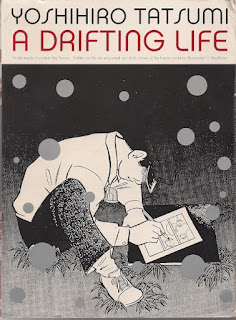 ﻿Yoshihiro Tatsumi’s A Drifting Life [Drawn & Quarterly; $34.95] is
the cartoonist’s 800-page-plus autobiography of his career in manga
from its beginnings to the signing of the 1960 Treaty of Mutual
Cooperation and Security between the United States and Japan.  For
all my interest in manga, I had no idea of the early history of the
art form and industry and, because of that, this book fascinated me
from start to finish.

Hiroshi is Tatsumi’s counterpart in A Drifting Life.  He grows up
in a family suffering from Japan’s World War II aggression and from
more internal problems.  His divorced parents still live together
in an attempt to ease the family’s financial burdens.  His brother
is sickly, given to irrational fits of anger and jealousy directed
toward Hiroshi.  Knowing something of sibling jealousy myself, such
scenes rang very true to me.

The manga industry shown in this book is completely different from
the industry we know today.  Hiroshi’s first sales are four-panel
strips.  Somewhat longer works were created for the rental market.
Short story magazines become popular and a steady source of income,
even as Hiroshi longs to create longer stories that expand manga’s
possibilities.  He is encouraged, inspired, and sometimes brought
to despair by the comics he reads and the movies he views.  There
are bad and good decisions to be made and pitfalls to be suffered.
Despite the length of this book, it offers but the merest glance at
the complicated manga industry from 1945 to 1960.  When I finished
it, I wanted more...more manga history and more of Tatsumi’s life
and career.

I don’t hesitate to declare A Drifting Life to be a masterpiece and
must reading for comics historians and manga fans alike, though I
suspect it will not suit those with a more casual interest in manga
and manga history.  On my end, it has me wondering if someone has
written that great book on manga history that answers the questions
Tatsumi left me with.  Suggestions are welcome.

In private e-mails, my readers keep expecting me to be down on 1001
Comics You Must Read Before You Die [Universe; $36.95], which those
readers perceive as eating my 1000 Comic Books You Must Read lunch.
The only similarity I see is in the names of the books.  I focused
on the history of the American comic book as seen from my personal
history and perspectives while general editor Paul Gravett and his
many writers took a more international approach.  I think my book
is more personable and fun to read, but that hardly negates what I
see as the considerable value of the Gravett book.

I’m reading Gravett’s book at a pace of around five pages per day.
I’m getting exactly what I expected and wanted from it, suggestions
of great comics from a global perspective.  Because of entries in
this book, I’ve read and enjoyed a number of comics works.  Which
is why I bought it.  Well, that and the amusement whenever I read
fans complaining about some favorite comic that’s not in the book.
I feel your pain, brother Gravett.

I am amused by the similarities between two manga series currently
on my reading pile.  Ken Akamatsu’s Love Hina is about a struggling
student (Keitaro Urashima) trying to get into Tokyo University and
working as the landlord of an all-girls dorm.  Hilarity ensues in
this romantic comedy that involves much accidental viewing and even
groping of attractive female tenants.

Then there’s Kouji Seo’s Suzuka, named for a beautiful track-and-
field star who has transferred to a Tokyo school.  The hero of this
series is struggling student Yamato who is living in the all-girl
housing complex owned and operated by his aunt and where he earns
his keep by doing some landlord duties.  Hilarity of a moderately
more explicit nature ensues in this romantic comedy that involves
much accidental viewing and groping of attractive female tenants.

The similarity became even more amusing to me when both Keitaro and
Yamato came down with debilitating colds at the same time.  It was
in the second volume of Love Hina and the first of Suzuka, which,
as coincidence would have it, I read back to back.

Love Hina came first by several years.  Suzuka has far more alcohol
consumption and nudity.  I’m enjoying both series.  I wouldn’t rank
them among the great manga works, but they are fun.  And sometimes
that’s all I need from comics.

Bumps in the road that is my life often interfere with my reaching
my desired destinations.  This has become the case with my garage
and online sales.

I had hoped to start my summer-long garage sale this month.  That
will likely not happen until the first weekend in May.  My plan is
still what it was: at least two open garage sales per month while
allowing fans and retailers to make appointments to shop whenever
it’s convenient for both me and them.

My online sales start today.  Here’s how they will work:

Come Monday, unsold items will be listed here, on my message board
and on my Facebook page.  Anything that doesn’t sell by the end of
the week will go up on eBay or into my garage sales.

Don’t expect garage sale prices on online sale items.  These online
sales require more work than selling stuff out of my garage.  The
prices will be good, but not insane.  If you want insane, you will
need to come to my garage sales.  Either way, your patronage will
be appreciated.