TONY’S BACK PAGES: THE BARKER 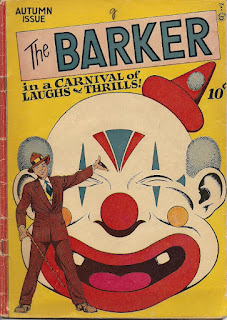 Sometimes the comic books I find in my Vast Accumulation of Stuff
surprise even me.  Though I have no memory of buying The Barker #1
[Quality; Autumn 1946] and three other issues of this title, there
they were when I unearthed and opened yet another long-buried comic
box.  I was simultaneously delighted and frightened.

Created by Joe Millard (writer) and Jack Cole (artist), the Barker
made his debut in National Comics #42 [Quality; May 1944].  Carnie
Callahan is the barker for Colonel Lane's Mammoth Circus and a pal
to the performers of that circus: the plentiful Lena, Major Midge,
strong man Tiny Tim, and the four-armed Spudo.  When not pitching
the wonders of the circus to potential customers, Callahan handled
the criminals who either tried to rob the circus or use it as cover
for committing other crimes.

The four stories in this issue - one is a solo story featuring the
spider-limbed Spudo - are drawn and possibly written by the great
Klaus Nordling, whose style contains elements of both Cole and Will
Eisner.  Nordling worked with Eisner on the weekly Spirit sections
and other features.

All four stories are good goofy fun, but the tour de force is the
14-page finale in which the larcenous fortune teller Adou Ben Hafiz
joins the Mammoth Circus.  The shiek brings along his servants and
his nine gorgeous wives.  He’s taking Colonel Lane and the circus
customers for a fortune when Callahan’s suspicions and Adou’s own
jealousy - he catches Major Midge flirting with one of his wives -
exposes his scheme and kicks off a slapstick brawl.  A highlight of
this wacky tale is a two-panel sequence in which Spudo searches for
a pickpocket by checking the pockets of four unsuspecting customers
at once.  That thing on my face after reading this issue?  It’s a
really big grin.

If those other three issues of The Barker I have are as much fun as
this first issue, it could be the start of a beautiful collection.