BRIDE WITH THE BROKEN HEART 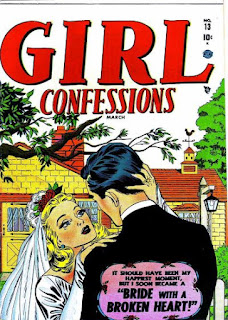 This bloggy thing of mine seems to pick up new readers on a daily
basis, so, for those of you just joining us...

I am fascinated by the comic books that hit the newsstands in the
month of my birth, December 1951.  More often than not, my bloggy
things begin with an examination of one such comic book.  If these
comics don’t interest you, just skip past them to the news, views
and reviews that follow them.

Today’s comic book from the month of my birth is Girl Confessions
#13 [March 1952], continuing the numbering of Girl Comics.  The
wonderful Atlas Tales website opines that Al Hartley drew the cover.
Thanks to the same site, I’ve seen the splash pages of the issue’s
four stories and read the entire final story.

“The Bride With the Broken Heart” (6 pages) is signed “Jurist and
Pike.”  That probably means Ed Jurist wrote the story and Jay Scott
Pike drew it.  The “Bride” seems deliriously happy on the splash,
so the breaking of her heart must come later in the tale.

“The Awakening” (6 pages) is drawn by Ogden Whitney.  Judging from
the first page, a wealthy socialite turned social worker falls for
a guy with a bad reputation.

Two sisters love the same man in “I Can’t Get Married” (5 pages).
The story is drawn by Morris Weiss.

“Fatal Error” (6 pages) appears to be the high point of the issue.
Fashion photographer falls in love with beautiful woman and makes
her the 1950s equivalent of a super-model.  A shady Hollywood guy
lures the lady away from the photographer with his promises of love
and movie stardom.  But a screen test reveals the model is not at
all photogenic; it’s the photographer’s love for her that made her
shine in all those fashion shoots.  The woman realizes her mistake
and rushes back to the man who truly loves her, giving up modeling
to become his wife.  Aside from that sadly of its time conclusion,
it’s an above-average story drawn by the great Bill Everett.

There were many great artists drawing non-series romance, horror,
crime, war and western stories for Marvel in the 1950s.  I’d love
to see a whole bunch of “Best of” collections showcase the work of
Everett and others.

You can’t have a Marvel Comics event without tossing one-shots and
mini-series into the mix and, unfortunately, that was the case with
“Spider Island.”  Some of them worked, more of them didn’t.  There
will be SPOILERS AHEAD.

The now-tiresome Mr. Negative played a major role in Spider Island:
Cloak and Dagger, a three-issue series.  At the end of the series,
Cloak and Dagger have switched powers, Mr. Negative has revealed he
is fated to die at Dagger’s hands, and the concluding pages appear
to be a promo for some future Cloak & Dagger series.  This would be
one of the spin-offs that didn’t work for me.

Spider Island: Deadly Foes was a one-shot with solo stories of the
new Hobgoblin and the Jackal.  These tales reveal those characters
are really evil.  Yawn.

Spider Island: Deadly Hands of Kung Fu was three issues of fighting
pretty much inconsequential to the over-all event.  I did chuckle
at how most of the kung fu moves used by the combatants were named
in captions, partly because they were really silly names and partly
because, for this reader, they brought the action to a halt every
time they were named.  When that nonsense is the most notable thing
about a mini-series, it didn’t work.

Spider Island: Heroes for Hire by Dan Abnett and Andy Lanning with
art by Kyle Hotz and Bob Almond was another one-shot.  This story,
revealing unspoken feelings of two characters, worked for me.  It
may not have meant much to the overall Spider Island story, but did
move those characters forward.

Spider Island: New York City was a one-shot anthology showing what
happened to a handful of citizens during the event.  It was great
fun and I recommend it.

Spider Island: Spider-Girl was a three-issue mini-series picking up
elements of (I assume) earlier Anya Corazon stories and forcing her
into an alliance with the Kingpin.  It did have some bearing on the
overall event, but it never rose above the level of adequate.  Not
bad comic books, but not particularly good ones.

Spider Island: Spider-Woman fell into the same adequate range, but
I was amused/impressed that one of its plot elements stemmed from
a 1970s issue of Marvel Two-In-One.  That was some serious digging
through the archives.

Spider Island: The Avengers was another one-shot.  It featured an
appearance by Frog-Man and babysitting fun with Squirrel Girl and
the spider-powered child of Luke Cage and Jessica Jones. How could
I not love this comic book?  Kudos to writer Chris Yost and artist
Mike McKone for a very entertaining issue.

Spider-Man is an active member of the Avengers, not to mention his
work with the Future Foundation, his job at Horizon Labs, and his
solo adventures.  That stretches my willing suspension of disbelief
to the breaking point.

So you can imagine how the opposite of thrilled I was at the launch
of Avenging Spider-Man, an ongoing series teaming Spidey with his
fellow Avengers.  The first three issues have Spidey and Red Hulk
battling some ugly guy who conquered the Mole Man and it’s drawn by
Joe Madureira.  I know Madureira has many fans, but, for the life
of me, I can’t understand why.  That initial story was followed by
somewhat better one-offs with Hawkeye and Captain America, but I’m
not seeing any burning creative need for this new title.  Beyond,
of course, Marvel’s clear desire to make a few more comics-selling
bucks from this year’s release of Avengers and Spider-Man movies.

The convoluted history of Kaine, originally an unstable Spider-Man
clone created by the Jackal, makes my brain hurt.  Fortunately, it
doesn’t impact that heavily on Scarlet Spider, an ongoing series in
which Kaine is the principal character.

Set in Houston, Scarlet Spider has Kaine changing his original plan
to lead a peaceful life in Mexico, far from all the madness of the
Marvel Universe.  Instead, he finds himself drawn into events that
require his great power and, somewhat ruefully, accepts the great
responsibility thrust upon him.

Though I never cared for Kaine previously, writer Christopher Yost
has me interested in the guy and rooting for him.  I also like the
look of the book, courtesy of penciler Ryan Stegman.  I’m sticking
with the title.