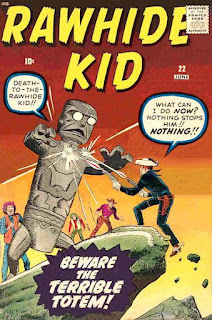 The giant monsters who appeared on the covers of Tales of Suspense
and other Marvel fantasy comics of the early 1960s must have been
decent draws.  How else can one explain the Rawhide Kid’s encounter
with “The Terrible Totem” in Rawhide Kid #22 [June 1961]?

Jack Kirby penciled and Dick Ayers inked the cover of that unusual
issue, which, like the previous issue, shows Rawhide from the back.
In another similarity to the previous issue, the 19-page “Beware!!
The Terrible Totem!!” is the only Rawhide Kid story in the issue.
By the way, that’s not a typo in the title of the story.  As seen
on the title splash of the first chapter, writer Stan Lee actually
doubled up on the exclamation points.

The Totem looks silly, but there are lots of neat touches in this
adventure.  The Kid is on the run from a posse and tries to hide by
working as a miner.  The boss of the mine doesn’t give a whole lot
of thought to the safety of his employees, which would likely earn
him an obscenely large bonus in today’s world.  We never find out
where the sentient Totem comes from, only that he was “slumbering”
for ages and seeks to conquer the human race.  For the big finish,
Rawhide, the miners, and the posse join forces to fight the Totem
with the Kid being the guy who sends the creature plummeting into
a “bottomless canyon.”

Keeping a promise made in the heat of battle, the Kid surrenders to
the lawman leading the posse.  But the sheriff says he’ll have his
hands full taking the mine boss back to town for mining deeper than
the law allows.  Darn those job-destroying liberals!

That’s the Rawhide Kid, making new friends whenever his lonely road
takes him.

The Rawhide Kid story is followed by a text story.  Which I didn’t
read and which I rarely read back in the day.  I would read letter
columns darn near religiously, but I could never get into the text
stories.  Surprising when you consider I usually read two or three
prose novels each and every week.

Stan Lee teams up with Don Heck to finish out the issue with “Slap
Leather, Lawman!”  It’s a mediocre four-page short wherein an aging
sheriff has a gun duel with a much younger cattle-rustler.  Though
the young man draws first, the sheriff doesn’t go down and disarms
the rustler with a shot to the shoulder.

The sheriff faces his wife: “I reckon it was only, fittin’, Marcy!
I spent my whole life fightin’ for this tin badge...”

His wife finishes her hubby’s thought: “And now it’s paid you back,
dear...by saving your life.  By stopping Rand Crass’s bullet” 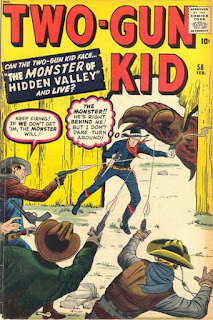 Marvel did two other cowboy/monster stories in the 1960s.  In Two
Gun Kid #58 [February 1961], the blond and sometimes singing cowboy
Clay Harder who had the name before the masked hero, came face-to-
face with “The Monster of Hidden Valley” in a story by Lee, Kirby,
Ayers.  However, the “monster” was nothing more than a really big
buffalo disguised by a bad guy...and he would have gotten away with
it if it weren’t for that meddling cowboy! 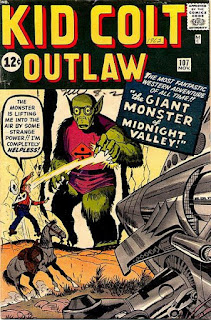 Then, in Kid Colt Outlaw #107 [November 1962], the title hero met
“The Giant Monster of Midnight Valley!” in a story by Stan Lee with
art by Jack Keller.  This monster is a friendly alien, but I can’t
remember how the adventure ended.  The cover of the issue was drawn
by Kirby and Ayers...because when better monsters are drawn, Kirby
and Ayers would draw them!

I’ve always wondered what effect these monsters had on the sales of
these issues.  From what I’ve learned of Goodman, if the sales had
been really good, there would have been a lot more giant monsters
in these westerns.  When the super-heroes took off, we did get the
western comic equivalent of super-villains, some of them costumed.
I got a kick out of those comics, but, eventually, all of the three
titles - Kid Colt Outlaw, Rawhide Kid, and Two Gun Kid - went back
to more traditional western tales.