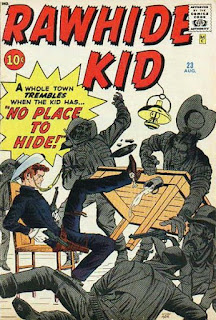 After presenting two issues in a row of one long Rawhide Kid story,
The Rawhide Kid #23 [August 1963] featured two stories...and one of
them is a true comics oddity.

The Jack Kirby/Dick Ayers cover pictures a scene from “No Place to
Hide!”, the longer of the two stories.  According to the wondrous
Grand Comics Database, the cover was colored by Stan Goldberg and
lettered by Artie Simek with cover copy written by editor Stan Lee.
Yet the issue leads with the 7-page “The Origin of the Rawhide Kid”
by Lee, Kirby and Ayers.

Though this version of the Rawhide Kid was introduced just a year
prior, the splash page proclaims this retelling of his origin tale
with big bold copy and double exclamation points: “Here it is!! The
story you asked for!! The story you demanded...”

What makes this story such an oddity is that the script is almost
entirely the same as the script for the original origin story from
The Rawhide Kid #17 [August 1960] with Kirby redrawing the panels
differently than he did in the original.  It’s fun comparing these
two stories side-by-side.

I like the second version of the splash better than the first.  If
I were to keep score, my interior panel preference between the two
stories would probably end in a draw.  Pun intended.

“A Place to Hide!” (11 pages) mixes some by now familiar elements
of Rawhide Kid stories.  We start with the Kid on the run from the
law.  He flees to the “spooky-lookin’ town” of Sagebrush where no
one recognizes him.  Sagebrush is dominated by bully Luke Stokes,
but, though he itches to take Stokes down a peg, the Kid pretends
to be a coward rather than lose this relatively safe haven.  This
is a disappoint to pretty Nancy Stokes, who had hoped someone had
come along who could stand up to her brother.

Like Popeye in one of those cartoons where he promises Olive that
he will not lose his temper, the Kid keeps himself in check until
Montana Joe and his henchmen - Ox and Weasel - hit town.  Montana
tries to force himself on Nancy.  When Luke learns who his sister’s
new admirer is, he turns tail: “Don’t be a fool, Nancy! Suppose he
wants to be friendly--what’s wrong with that? Montana Joe’s a big
man! Yuh--you oughtta be proud!”

You can practically see the steam coming out of Rawhide’s ears as
he faces down Montana Joe and his goons for two pages of punching
and shooting.  He finishes up by slapping around Luke for a couple
panels while explaining life to him: “There comes a time when a
hombre can’t stand by and let jaspers annoy a woman--while her
spineless brother looks the other way.”

Words to life by as the Rawhide Kid rides off into the sunset...on
account of all of these story-ending battles take place late in the
afternoon:

Stan Lee and artist Paul Reinman conclude the issue with the non-
series “They Called Him Outlaw!” The five-page story starts with a
pair of owlhoots surprising a third man at his campfire.  The man
has nothing worth stealing, but convinces them to let him join them
in their next criminal enterprise.  Their plan is to rob an elderly
couple who live in a secluded cabin and who keep their money under
a loose floorboard in the bedroom.  Say what you will about these
lowlifes, they know surveillance.  The funny thing is...that third
man is not only a lawman, but he’s also the son of the elderly
couple. Imagine the embarrassment of those unlucky owlhoots as they
are battered and disarmed by the deputy.

My memory on this isn’t as sure as I would like, but it seems to me
Marvel published several short western tales in which a lawman was
mistaken for a outlaw by outlaws and then turned the tables on his
new “friends.” If any one can cite other examples, I reckon I would
appreciate the information.

Look for more Rawhide Kid recollections every Wednesday.  I will be
back tomorrow with more stuff.