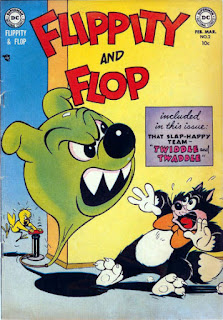 ﻿Flippity and Flop appeared in a mere four Screen Gems cartoons
(1945 to 1947), but the canary-and-cat adversaries were licensed by
DC Comics and continued to appear in comic books until 1962 or so.
This second issue [February-March 1952] was published in the month
of my birth, December 1951.

Edited by Larry Nadle, the issue featured three short Flippity and
Flop stories by writer Hubie Karp and artist Jim Davis.  The cover
was also drawn by Davis, who is not the same Jim Davis who created
Garfield.  In addition to those three tales, the issue featured a
short comics story starring mice Twiddle and Twaddle (also by Karp
and Davis), activity features by Martin Naydel, and a text story.

Flippity and Flop enjoyed a brief moment of modern-day recognition
when Republican presidential candidate Rick Santorum used a clip of
them in a television ad attacking rival Mitt Romney for changing so
many of his positions to appear more conservative.  When the owners
of the property filed a cease-and-desist order, the ad was removed
from the airwaves.

Keep reading this bloggy thing for more vintage comic books from my
birth month.  Back then, you could have bought all 153 of them for
less than your weekly comics bill.

This being April Fool’s Day, I wrote a bogus press release in which
I announced the huge-bucks sale of my first movie script.  However,
a funny thing happened as I was writing that dollop of frivolity.
I realized that I actually wanted to write that script.  Maybe not
as a movie script, though that’s a possibility, but as something.
Graphic novel? Prose novel? Webcomic?  I don’t know at this point.
When I do, I’ll write it.  When it’s written, I’ll tell you about
it. Genius or madness? You’ll decide.

DC and Time-Warner are trying to depict their soulless corporation
as the “good guys” in their continued legal attacks on the Siegel
family.  This is such an absurdity that, were I to look up the word
“absurdity” in the dictionary, I would not be surprised to see it
illustrated by that hideous new DC logo.

You can find numerous articles and columns on those proceedings on
the Internet.  I’ll not attempt to summarize the nuts and bolts of
them here.  Instead, I’ll merely share with you what I believe.
My belief is based on information given me by several trusted
sources, some of them within DC.

I believe Paul Levitz brokered a deal between the Siegel family and
DC Comics that the family was willing to accept.  There was a great
deal of money involved in this deal, but it was a fair agreement,
one all parties could live with.

I believe Time-Warner refused to sign off on that deal.  I do not
know if they simply nixed it or if, when they drew up the contract,
it was not what the Siegels had agreed to.  I was told two versions
of this, but the end result was identical: no deal.

Sometime after the above, the Siegel family hired new and clearly
more aggressive legal representation.  Their new attorney has won
most of the battles with DC.  Guess who’s not pleased about that?

DC has tried to smear the Siegel lawyer in every venue available to
it.  Putting it mildly, I find DC’s tactics questionable.

Honestly, I myself don’t much care for the Siegel lawyer.  That’s
utterly immaterial.  If his clients are satisfied with him and with the
agreements they have made with him, that’s all that matters.  It’s
not my business and it’s not the business of comics fans.

Sidebar.  Let’s talk about the heartless comics fans for a moment.
The ones who support corporations over creators.  The one who would
rather see creators treated not just unfairly but abominably rather
than risk any disruption in their weekly stream of DC comic books.
The ones who believe every lie DC Comics tells them.  I wish these
fans were around when I was trying to sell that bridge.  Though it
may be undiplomatic of me to state this, I have naught but contempt
for those fans.  End of sidebar.

I believe DC’s strategy has been to outlive the Siegel family.  I
think this nonsense about a jury trial is an attempt to delay DC’s
inevitable loss in most areas of these proceedings and to delay
DC’s having to pay the Siegel family a lot of money.  Maybe
even more than the millions of dollars DC Comics and Time-Warner
have already spent in legal fees.  If the estimates given to me by various
sources are accurate, we’re talking over $30 million that DC and
Time-Warner have shelled out in legal fees of one sort or another.
Merely thinking about so much money leaves me breathless.

This matter has gone on long enough.  It’s well past time for the
heirs of Jerry Siegel to receive justice and the benefits that the
co-creator of Superman wanted for them.