SURRENDERING TO HIS KISS 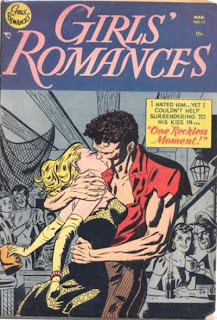 ﻿The Alex Toth-penciled cover of Girls' Romances #13 [February-March
1952] is not just the most powerful and striking romance cover of
the month.  The art is taken from the splash page of “One Reckless
Moment” and is a contender for the most powerful and striking cover
of any comics genre published that month.  It’s so striking that I
didn’t notice until later that the cover’s upper left corner lacks
the traditional “DC circle.”  DC distanced its romance titles from
the rest of its line back then, but I don’t know why.  Feel free to
enlighten me.

The Grand Comics Database has one-line synopsis for the stories in
this issue and three out of four of them deal with class issues of
one kind or another.  In “Let Me Forget,” a fashion designer whose
hard work and talent took her from her poor neighborhood beginnings
is loathe to commit to the doctor she loves because he has a clinic
in that neighborhood.  In “Love Without Faith,” the heroine loves
a struggling inventor despite others telling her she should marry
a more successful and practical man.  In “One Reckless Moment,” an
impulsive rich girl and a penniless seaman fall in love and, from
what the synopsis implies, it ends badly.

The story that breaks from class issues is “Castoff Sweetheart!” by
Natalie Krigstein, wife of artist Bernie Krigstein.  The synopsis
for that one:

Carol keeps dumping boring boyfriends and coming back to reliable
Paul each time, but maybe she's waited too long to discover that
it's Paul she really loves.

Krigstein also wrote “Love Without Faith.” Her writing credits on
this issue come from comics historian Robin Synder.  The only
artistic credits are Toth pencils on the cover story and, possibly,
Mike Sekowsky pencils on “Castoff Sweetheart!”

More vintage comics on sale in my birth month [December 1951] will
be spotlighted in future bloggy things.

Kevin Keller [Archie; $19.99] reprints all the Kevin Keller stories
prior to the launch of his ongoing series.  In Kevin, writer/artist
Dan Parent has given Riverdale a positive gay character, but, just
as importantly, he’s made the Archie community the kind of diverse,
welcoming community that realizes the best hopes and dreams of the
American people.  Though the stories largely shy away from showing
the anti-gay bigotry and bullying that exists in our society (The
closest the stories come to this is when Kevin’s opponent for class
president tries to paint Kevin as an unmanly one-issue candidate.),
that’s acceptable in Riverdale as it is and has always been shown
in the Archie comics.  It’s a place where good people generally do
good things.  I wish I could live there.

On several past occasions, I’ve praised Archie Comics, Parent and
inker Rich Koslowski for the excellence of the Kevin Keller comics.
If I had even a minor quibble, it was that Kevin was the only gay
teenager or adult seen in the stories.  As groundbreaking as it is
to have a gay teenager in Archie comic books, it has less impact if
we never see that teenager doing what most of the other teens are
doing: dating someone he finds attractive.

I want to live in Riverdale.  Who wouldn’t?

As I write this bloggy thing, I’ve read Dark Horse Presents #1-8.
While I’m not feeling the personal need to write an issue-by-issue,
feature-by-feature review of those comic books, here’s my list of
my top ten features to date in chronological order:

While the above are my favorites, almost everything that’s appeared
in DHP has been of well-above-average quality.  I hope to continue
enjoying this anthology title for many years to come.

Mark Waid’s Daredevil remains one of my favorite current series and
probably my second-favorite super-hero series after Thom Zahler’s
Love and Capes.  I read DD #7-10 last week and especially enjoyed
Waid’s take on the Black Cat.  Very cool and optimistic.

There’s some talk that Matt Murdock may be heading for some sort of
fall, but I’m really hoping that’s idiotic promotional crap.  We’ve
seen Murdock falling for over a decade and it stopped being at all
interesting over a half a decade ago.

Super-hero readers like super-heroes...and I’m more likely to enjoy
super-hero comics by writers who like them as well.

I’m taking a few days off to work on this and that.  Depending on
how that work goes, I’ll be back next week.