TERROR OF THE GOLDEN CLAW 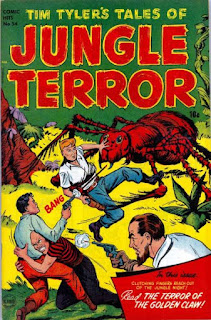 ﻿Tim Tyler’s Luck was a comic strip created by Lyman Young, brother
of Chic Young, the creator of Blondie.  The King Features Syndicate
strip ran 68 years from August 1928 to August 1996.  Tim started
out in an orphanage, but soon left to have adventures with his pal
Spud.  His light adventures became more serious as strips like Dick
Tracy rose in popularity, Eventually, Tim and Spud would spend most
of their time in Africa.

Harvey Comics Hits #54 hit the newsstands in December 1951, which,
as you know, was the month of my birth.  The “Tim Tyler’s Tales of
Jungle Terror” logo emphasizes “Jungle Terror.”  The jungle comics
were still strong sellers in 1951 with horror comics becoming more
popular each month.  The cover - artist unidentified at this time -
reflects both genres.

Inside the issue, “The Terror of the Golden Claw” cover story ran
31 pages.  The Grand Comics Database doesn’t have credits for this
adventure, but I’m guessing it’s reprints from the Tim Tyler’s Luck
comic strip.  Also in the issue was a page introducing the tale’s
main characters, a “Weird Jungle Customs” filler page, a biography
of Lyman Young, and a Tim Tyler pin-up page.

Harvey Comics enjoyed great success with comic strip characters in
the 1950s.  This month also saw comics starring Blondie, Dagwood,
Dick Tracy, Dotty Dripple, Humphrey, Joe Palooka, Kerry Drake, and
Little Max, plus the multi-character Junior Funnies.  I’ve covered
some of these in earlier bloggy things and will get to the rest in
future ones.

Coming later this week will be a self-revelatory bloggy thing on my
anger issues - What...you thought I was a pussycat 24/7? - but, for
today, you get odds and ends from my desk.

Adam Warren’ Empowered has been just outside my immediate radar for
a couple years now.  Courtesy of my local library system, I’ve now
read Empowered Volume 1 [Dark Horse; $14.95].  The title heroine is
a young woman of courage who, unfortunately, gains her super-powers
from a skintight costume that rips easily, thereby robbing her of
her powers.  She can’t wear anything under the costume - what you
see is what she’s got - and she generally ends up captured and tied
up by the villains.

I would not have thought Empowered would delight me as much as it
did.  Warren’s writing is very funny and his art most expressive.
Before long, I came to adore Empowered as much as her boyfriend, a
reformed henchman of super-villains.  There are terrific characters
in this series, including a captive alien demon lord who lives with
Empowered.  There is surprising character growth in these stories
and a few unexpected dark moments.

Empowered is wonderful fun, albeit for adult readers.  I’ve already
requested the next volume from my library.

Mildly amusing in a ghoulish way was Punisher Max Vol. 2: Kitchen
Irish by Garth Ennis and Leandro Fernandez [Marvel; $14.99].  On a
whim, I decided to read this series via trade paperbacks from the
library.  Two books in and there’s already a sameness to them.  We
get odd and violent characters who do incredibly gory and violent
things to one another.  No character growth, no surprises beyond an
occasional “oh, crap” moment, nothing to distinguish these stories
from most other Punisher stories save for the “explicit content.”
Of course, this being the United States and all, “explicit” means
violence and not sex.

Reading Punisher stories every now and then isn’t bad.  The books
are akin to those bad crime movies one watches for the explosions
and slaughter.  But the Punisher remains a played-out mannequin and
I’m not sure there’s any life left to be found in a character who
was little more than a second-rate rip-off of Don Pendleton’s Mack
Bolan.

Not the least bit entertaining were issues #2-7 of Savage Hawkman
[DC; $2.99 each].  It’s a ugly comic book series which hasn’t done
anything in seven issues to make me give a rat’s ass about Carter
Hall or care about its convoluted reworking of a classic DC hero.
The book even took the Gentleman Ghost, an elegant and interesting
villain created by Robert Kanigher, and made him as inelegant and
tiresome as everything else in the series.  Indeed, the only thing
I’ve liked about these issues is a decent guest-star appearance by
Static.  From where I sit, this “New 52" series is an utter failure
and, since I can’t imagine it’ll get any better with the arrival of
its new creative team, I’m adding it to my growing list of “New 52"
titles I won’t be reading in the future.

Turning to newspaper comics, Mary Worth is feeling mighty pleased
with herself because Nola has vowed to forego her treacherous ways
and do good from now on.  This surprising change of life happened
after Nola was confronted by the man she framed in order to get his
job and then comforted by a homeless man.  Nola even confessed her
crimes to her boss and resigned her position.  However, grumpy old
Tony has a problem with this scenario.

Nola committed a serious crime and there’s no mention that she will
be charged with that serious crime, which, to be fair, Mary should
have reported as soon as the meddling Ms. Worth found out about it.
Moreover, there’s no guarantee the man Nola framed will get his job
back or be able to fix things with his family.  Maybe, if he hires
a good lawyer, he’ll be able to sue his former company for wrongful
dismissal and Nola for framing him.

My preference? Nola earns her redemption in prison.  I’d also love
for someone to explain to Mary Worth that she failed her own moral
duty to report Nola’s crime and was therefore complacent in Nola’s
crime.  Keeping her mouth shut might not have been illegal in this
case, but it definitely wasn’t the right thing to do.

Later today, I’ll be posting a list of stuff for sale from my Vast
Accumulation of Stuff.  Watch for it.