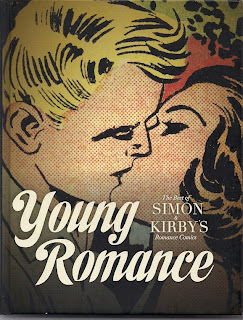 Joe Simon and Jack Kirby brought the romance comics from the pulps
and confessionals to comic books.  They brought the same sense of
the dynamic to these tales as they did to Captain America, the Boy
Commandoes, and their other comics triumphs. Young Romance: The
Best of Simon & Kirby’s Romance Comics [Fantagraphics; $29.99],
edited by Michel Gagne, celebrates their landmark work in a genre
that changed the face of comics for a time.

The title isn’t precisely accurate.  Some of the very best Simon
and Kirby romance stories aren’t collected in this hardcover volume
because Gagne made the decision not to duplicate the stories found
in Richard Howell’s out-of-print Real Love: The Best of the Simon
and Kirby Romance Comics. It was the right call, but I would love
to see that earlier volume back in print in hardcover and in color,
and with Gagne’s wonderful restorations.

Gagne’s selections are first-rate.  These stories are fiery fare.
Lovers clash like storm-tossed waves on rocky shores.  They battle
misconceptions and social injustices.  Tales like “Her Tragic Love”
and “Fraulein Sweetheart” are a punch-to-the-gut.  The heroes and
heroines of “The Town and Tony Benson,” “Kathy and the Merchant of
Sunset Canyon,” and “Sailor’s Girl” are complex and determined as
they fight against and then find romance.  “Norma, Queen of the Hot
Dogs” made me smile.  Even stories created under the constraints of
the Comics Code pack a wallop.  In the skilled hands of Simon and
Kirby, love is most definitely a battlefield.

The book’s special features are also top-notch.  CBG’s own Michelle
Nolan provides an introduction.  Dozens of covers are reprinted to
give readers a even greater feel for the era.  Gagne adds his own
thoughts to the mix and also leads the readers through the how of
his restoration process.

Young Romance: The Best of Simon & Kirby’s Romance Comics belongs
in the personal library of all Simon and Kirby fans and all serious
students of comics art and history.  It’s a prime example of what
I mean when I say this is the true golden age of comics.

Richard L. Graham’s Government Issue: Comics for the People, 1940s-
2000s [Abrams Comicarts; $29.95] is a fascinating look at the comic
books produced by the United States government to educate soldiers,
promote the military, teach about job opportunities, get citizens
involved in their government, and, often, promote lifestyles that
the government approved of.  It’s filled with remarkable examples
of these comic books, which were drawn by some of the great names
in our field: Will Eisner, Milton Caniff, Joe Kubert, Walt Kelly,
and even Theodor Seuss Geisel, better known as beloved storyteller
Dr. Seuss.  It’s so filled with cool stuff that you’ll return to it
time and time again.

Graham’s historical commentary takes a back seat to the comics, but
it is no less keen for that.  I relish such odd reflections as the
government continuing to publish comic books at a time when comic
books in general were under attack by Congress and desperate social
reformers looking for something to blame for a sea of woes.  One of
the most successful ploys of hack politicos has always been to get
the people afraid of something and then tell them who to blame for
that manufactured fear.  You’ll see it over and over again during
this year’s campaigns.

If your interest in comic books is strictly for their entertainment
value  - and there’s not a blessed thing wrong with that - you may
not love this Graham’s book as much as I do.  However, if, like me,
you are enthralled by all the uses and the variety inherent in the
American comic book, you’ll appreciate this tome.

Fly Volume 1 [Zenescope; $15.99] collects the first five issues of
the intense series created and written by Raven Gregory with art by
Eric J. It’s the tale of a new drug that gives its users the power
to fly and the chaos that use visits upon the lives of the series
protagonist and his girlfriend. There’s a world-outside-your-window
reality to this scary and suspenseful series, not surprising given
that it’s inspired by the author and his wife’s own addictions to
and battles with meth.  My favorite “super-hero” comics have always
melded the fantastic with the real.  Fly does that.

If you’re bored with how DC and Marvel do super-heroes, this series
could be right up your dark alley.  I’ll be astonished if Hollywood
doesn’t come around looking to get movie rights to this one.  I’d
go see it on the big screen and I don’t make that effort for more
than a couple films a year.

Fly. You’ll be talking about it soon.

It took Batman a while to recover from the campy (but fun) version
of the character that appeared on millions of TV sets in the 1960s.
Writer Dennis O’Neil, artist Neal Adams, and editor Julius Schwartz
generally receive the lion’s share of the credit for that comeback
and not without cause.  Still, there were other talented creators
who served Batman well and, alongside O’Neil and Adams, they shine
in Showcase Presents: Batman Volume 5 [DC; $19.99], over 500 pages
of clever criminology and spooky suspense.

Frank Robbins wrote most of the tales reprinted in this black-and-
white tome.  His Batman is a very human crime-fighter, not yet the
completely cold mastermind who can dispatch a dozen thugs without
breaking a sweat.  This Batman has to work hard for his victories.
I like this Batman better than the psychotic who shows up in many
of today’s Batman comic books.

Robbins often allowed supporting players take the center stage in
these years (1969-1971).  Artists Bob Brown and Irv Novick, solid
pros who knew their drawing and storytelling, always did a terrific
job bringing these characters to life.  Throw in a handful of fine
short stories by writer Mike Friedrich and several sublime efforts
by O’Neil and Adams and you have a big thick collection of comics
that will entertain you for hours.

My only complaint is that, for no good reason I can see, DC omitted
“Shutdown on York Street,” a nine-page story by Friedrich, Novick,
and inker Mike Esposito that originally appeared in Batman #225
[September, 1970].  I hope DC remembers to include it in Showcase
Presents: Batman Volume 6.