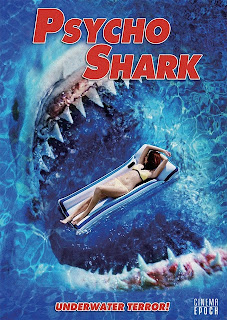 ﻿This has been a weird and challenging week for me, though, as ever,
I am sustained by my real family: Sainted Wife Barb, our kids and
my closest friends.  I also got some welcome paying work this week,
though it’s nothing I can write about.  It falls into the realm of
assisting and consulting, but it’s fun and interesting work for a
client for whom I’ve always enjoyed working. Just the projects to
jumpstart my creative juices for my own next projects, when and if
I can make those happen.

I hope you enjoyed the CBG reprints this week.  I generally post my
CBG writings a month after they appear in print.  Given the afore-
mentioned weird week, that timing could not have been better.  I’m
working on a somewhat personal piece for Sunday and have dozens of
comics to review starting on Monday, but, for today, you get random
ramblings on this and that.

When I stumbled across Psycho Shark [Cinema Epoch; $19.99] while
researching titles at the Internet Movie Database, I was astonished
I’d never heard of this 2009 Japanese movie which is also known as
Jaws in Japan.  After getting the DVD from my local library system
and watching it, I’m even more astonished I’d never heard of this
movie.  It’s the worst shark movie ever!

Psycho Shark claims to run 70 minutes, but I feel like it drained
several hours of my life.  According to its website, “Cinema Epoch
is a U.S. based distribution and production company specializing in
international cinema.” It’s acquired 200 or so movies and, clearly,
its standards are microscopically small.

Here’s the plot: Two young Japanese women vacation on a desolate,
remote beach.  If the guy running the place wore a t-shirt reading
“crazy murderous pervert,” it would be redundant.  If the somewhat
handsome younger guy who chats up one of the women wore that same
t-shirt, it would also be redundant...and the dimly-lit woman would
probably still go off with him to even a more remote part of that
beach where he could cut her with a knife and then try to feed her
to an enormous shark.  As he’s done before, he plans to videotape
the feeding frenzy.  He and his partner have regular sick bastard
customers for these videos.

If that sounds familiar, it’s because it’s pretty much the plot of
Shark Night (2011).  Though Psycho Shark came first, the makers of
Shark Night spend a lot more money on their crappy movie.

The big finishes of both Psycho Shark and Shark Night have a giant
shark who only appears for a few seconds.  In Shark Night, it’s big
enough to eat a boat.  In Psycho Shark, it’s big enough to swallow
a reef and the four people on it with the video camera miraculously
escaping digestive destruction.

As much as I hated Psycho Shark, I find myself intrigued by Cinema
Epoch.  All those movies.  Many of them have great titles.  Their
single-paragraph descriptions sometimes sound kind of cool in a “I
could write the shit out of that premise” kind of way. But, burned
once, I must assume these are all pretty bad movies.  I’ll let you
know if I work up the courage or depression to watch another of the
company’s offerings.

Speaking of things Japanese, my son Eddie Isabella is blogging on
anime and manga in his Blog of the Rising Sun.  In recent years, he
has become an avid anime/manga fan and he’s even recommended some
enjoyable works to me.  Most recently, he’s reviewed GTO: 14 Days
in Shonan, creator Toru Fujisawa’s sequel to Great Teacher Onizuka.
GTO is a favorite of mine.  I just finished the first volume of the
sequel and started reading the first volume of Shonan Junai Gumi,
also known as GTO: The Early Years.  Fujisawa’s Ekichi Onizuka is
a terrific character, a biker gang leader who becomes a remarkable
teacher despite his highly unorthodox methods.  Read the original
series for starters and, if you like it as much as I did, you will
want to read the prequel and sequel as well.

You should also check out Blog of the Rising Sun.  At least Eddie’s
inherited some of my more useful genes.

How conservative is the National Cartoonist Society?  All three of
its nominees for Editorial Cartoons - Lisa Benson, Mike Lester and
Mike Ramirez - are right-wingers.  Indeed, they are not only right-
wingers, they frequently parrot Republican Tea Party talking points
and often resort to blatant falsehoods in their cartoons.  I can’t
imagine them being considered the best in their field.  “Appalled”
best describes my reaction to their nominations.

I ask again...how conservative is the National Cartoonist Society?
And, as a follow-up, whatever happened to that “liberal media” the
right-wing keeps crying about?

Rich Johnston’s Bleeding Cool reports that the vile Rick Olney has
apparently created a new thing called All Aces Entertainment.  The
logo for the new company appears to be cribbed from several other
non-related companies.  Typical.

In the initial report, Johnston described Olney as “one of the most
pilloried names in comics” and a quick Google search reveals just
how well deserved is Olney’s bad reputation.  Previous to All Aces
Entertainment, Olney claimed to be hosting something he called “the
Adirondack ComicFest,” but that event was canceled as guest after
guest pulled out on investigating Olney’s history.  Still ongoing
from that event is Olney’s apparently illegal possession of Indiana
Jones maps created by Matt Busch as a fundraiser for charities who
never agreed to be associated with Olney or his show and whom don’t
seem to have received any maps money from Olney.

A Bleeding Cool update reports Olney is planning a “Fine Arts Show”
for September.  Given Olney’s history, I don’t think it is at all
unreasonable to assume this show won’t happen and that someone is
going to get screwed over because they trusted Olney.

Which brings me to the advice I keep giving and which I’ll continue
to give from time to time...

If someone contacts you wanting your creative services, check them
out online.  For example, Busch could have saved himself a world of
grief if he had checked out Olney prior to entering into any sort
of agreement with him.  In my less charitable moments, I sometimes
think that anyone who fails to check out Olney or thinks that Olney
won’t screw him or her deserves the misery that will always follow
in the wake of such a bad decision.

This advice doesn’t just apply to Olney.  It’s a precaution to be
taken whenever someone contacts you.  This isn’t an 100% guarantee
against being screwed, but it’s a really simple safety precaution.
Don’t get taken in by a con artist’s game.

Sometimes the shit I say makes my Sainted Wife Barb laugh.  While
I can’t recall what we were talking about the other night, at one
point, I said I was so stupid a zombie would starve if he tried to
eat my brain.  It would be a meal, it would be a snack.  It would
be a Brain McNugget.  Barb found this hilarious.