RUCKUS IN THE ROCKIES 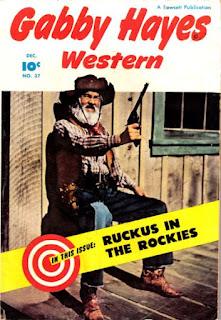 ﻿George “Gabby” Hayes (1885–1969) was the western movie sidekick in
well over a hundred films.  His gruff old man character appeared
with Hopalong Cassidy, Roy Rogers, Gene Autry, and more, and became
a quintessential and often parodied western movie icon.  He was and
remains unforgettable.

Gabby Hayes Western #37 was on the nation’s newsstands in December
1951, the month of my birth.  Published by Fawcett, the series was
was launched in late 1948 and continued for fifty issues, ending in
1953.  There was a solitary issue published by Toby Press in 1953,
but then Charlton continued the title and the Fawcett numbering for
another nine issues from December 1954 to January 1957.  One of his
Fawcett tales was reprinted in Great American Western #4, published
by AC Comics in 1989.

What is in Gabby Hayes Western #37?  I haven’t a clue.
The Grand Comics Database offers no information on the
issue beyond a scan of its cover.

Hayes appeared in 1950's The Caribou Trail, his last movie.  But,
from 1950 to 1956, he hosted The Gabby Hayes Show, an anthology of
western stories, on first NBC and then ABC.  He is represented by
two stars on Hollywood Walk of Fame, one for his work in radio and
one for his work on television.  According to Wikipedia, in 2000,
Hayes was posthumously inducted into the Western Performers Hall of
Fame at the National Cowboy & Western Heritage Museum in Oklahoma
City, Oklahoma.

Keep watching this bloggy thing for more comics from my birth month
on account of I get a kick out of them.

There were two more items on my list of comics topics that I said
I would write about on March 18.  Let’s see if I can cover them as
quickly as possible.

I told you a little while back that a major convention has told a
number of people that it does not invite me to be a “special guest”
- the only way I could afford to attend the event - out of fear I
would attack another “special guest” on a panel.  Never mind that
I have never done anything like that on any of the hundred or more
panels I have appeared on during my forty years in comics.

Some of you figured out what major convention I was writing about.
That doesn’t surprise me.  It wouldn’t take Sherlock Holmes or even
Scooby-Doo to solve that “mystery.”  If you pull off the mask, you
will see that it was that big noise in San Diego and, even with
those meddling kids, they will get away with it.  That’s just how
life works out sometimes.

Some of you have also speculated on the identity of the feared-for
special guest.  I will neither confirm or deny those speculations
beyond telling you it’s not Trevor Von Eeden.

If the guest knows nothing about the convention’s decision - and I
surely hope that’s the case - he would be embarrassed to know about
it.  If he was a party to that decision, then I would be extremely
disappointed in him.  Either way, I see no gain in my revealing his
identity.  I write about things because I think that they should be
written about and not to support any personal agendas.

Except for the Akron Comicon on Saturday, November 10, 2012, at the
University of Akron Student Union, I’m not scheduled to appear at
any conventions this year.  I don’t expect to add any other events
this year, but, should that change, I’ll let you know.

I am and always have been the sole creator of Black Lightning, no
matter what DC Comics or Comic-Con claims.  That’s how the creator
credit appeared during the entire first run of Black Lightning and
then some and that’s what was called for in my original agreement
to partner with DC in publishing my creation.  That’s how my credit
read up until very shortly after I inquired about buying out DC’s
interest in my creation.  Then the publisher, in violation of our
agreement, began listing Trevor as co-creator.

The reason I mentioned Trevor earlier was because he is a “special
guest” at Comic-Con this year.  He deserves it.  He is a talented
guy and he’s done some terrific work over the years.  He’s not the
“special guest” the convention believes I would attack.  Do not give
him grief in my name.

However, my admiration for Trevor’s talent aside, he is not the co-
creator of Black Lightning.  I have generously said that he was the
primary designer of the original costume, but his version of that
remains at odds with my memories and those of the other folks who
were there at the time.  Our disagreements on this and other issues
will likely never be resolved.  That, too, sadly, is just how life
works out sometimes.

There’s much more to the Black Lightning story, but I’m not driven
to write about it at this time.  I’ll get around to it eventually
and to other stories about my career.  When my head is in the right
place for me to do so.