YOU CAN’T BEAT THE LAW 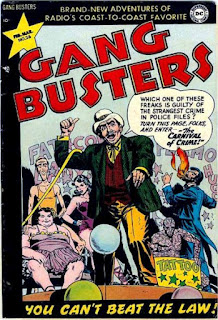 Published in my birth month of December 1951, Gang Busters #26 has
a cover date of February-March 1952. Ruben Moreira drew the cover
of the 44-page issue.  Inside, there were four comics stories and
a variety of features.  The stories:

“Heroes of the Highway” (6 pages, penciled by Curt Swan with inks
by Stan Kaye);

“The Case of the Dazzling Diamonds” (4-page Casebook Mystery drawn
by Bernard Bailey); and,

While the Grand Comics Database has not yet identified the writers
of these stories, DC editor Jack Schiff said writers for this title
included France Herron, Bill Finger, Dave Wood, Alvin Schwartz, and
others.  Let’s hope that someday these and other writers will get
full and proper credit for their work.

Diving into the reviewing pile...

Batman #2-5: I don’t dislike the “Court of Owls” storyline, but I’m
also not completely sold on it.  Part of my problem is the notion
of such a major criminal conspiracy operating for so long in Gotham
City without Batman being convinced of its existence.  Another part
is that Batman, having failed to uncover it as a young man, never
undertook a second investigation using his greater skills and more
modern technology.  Yet a third part of my problem is Batman being
trapped and tortured by the Owls.  While I like a more human Bats,
his foes playing mind-games on him is getting a little old for me.
Despite all those concerns, I’m still intrigued by the story.  I’m
hoping writer Scott Synder wins me over.

Batman and Robin #2-5: This book still leaves me cold.  The  Damian
Wayne in this one is more of a little prick that he is in the other
Bat-titles.  The new villain is yet another add-on to the already
extensive history of Bruce Wayne and the Batman; he's the son of
one of the men who trained Wayne.  He’s also a murderous vigilante,
but that’s sort of par for DC’s New 52.

I’d like to see a consistent and redeemable Damian in this book and
the other Bat-titles.  I could rattle off the names of at least a
half-dozen writers capable of that, but I don’t hear DC asking for
my suggestions, so I’ll leave it at this...Batman deserves better
than he’s been getting from the current management.

Batman, Inc.: Since the Batman continuity was left mostly intact in
the switch to DC’s New 52 Universe, I read Batman, Inc. #1-8 plus
the Leviathan Strikes one-shot.  I actually love the concept of an
international league of Batman-inspired heroes.  I’m not enamored
of the execution.  Bruce Wayne as the public face and patron of the
organization puts a big dent in my willing suspension of disbelief.
Additionally, I’d much rather see the international heroes having
their adventures sans Wayne in either of his identities.  Let him
write the checks secretly and off stage.  Despite my misgivings on
those matters, I haven’t yet kicked Batman, Inc. to the curb.  I’m
hoping the title improves when it relaunches in the second wave of
the New 52.

Written by Jennifer Keene. “Heir Apparent” was the best episode to
date of Green Lantern: The Animated Series, even if I figured out
the identity of the killer of a Lantern early on.  Queen Iolande is
a good character and I hope we see her again.  The Razer/Aya team
is a fun new element of the series.  Nicely done.

I’m enjoying the DC Nation live-action shorts wherein the weapons
of the DC heroes are tested to see if they would work in real life.
It might be nice to see a longer special - no more than a hour - of
this concept.

The “Superman of Tokyo” character made its second short appearance.
It’s a little bit creepy and a lot stupid, but in a good way.  If
a short makes me laugh, it gets thumbs up from me.  The Teen Titans
short...not so much.

Peter David wrote the Young Justice episode that finished off the
hour.  “Insecurity” was a neat little episode focusing on Artemis
and revealing the identities of her parents.  Red Arrow continues
to be a dick, but his issues with Artemis - and vice versa - were
convincing and well played.  A strong episode.

In other cartoon news...

Ultimate Spider-Man launched on the Disney XD channel last weekend,
but I missed the first episode.  Fortunately, the episode will be
shown several times during the week.  The DVR is set to record one
of those showings and, once I’ve seen the episode, I’ll write about
it here.

A few more bumps in the road of life have delayed the start of my
online sales and twice-monthly garage sales, but I hope to be able
to get those straightened away and ready to go within the next two
weeks.  Wish me luck.

My “read lots of comic books” plan is going somewhat better.  I’m
currently catching up with Spider-Man and reading “Spider-Island.”
I’m reading (and sometimes just skimming) X-Men titles from before
the Manifest Destiny event.  I’m reading IDW’s Doctor Who comics,
of which there are many.  Watch for reviews of these and many other
items in future bloggy things.

However, I think I can resist the urge to review the SyFy Channel’s
Seattle Superstorm, which made its debut last weekend.  Coming up
on SyFy: Alien Tornado and Space Twister.  I swear to Godzilla I’m
not making that up.

I’m taking a few days off, but I will be back next week with more
news, views, and reviews.