TO BE A COLLECTOR 2: THE VAOS STRIKES BACK 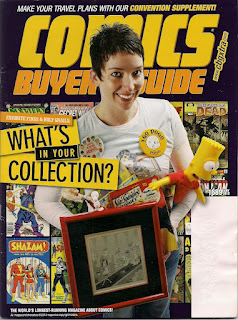 ﻿Comics Buyer’s Guide #1689 came out a few months back. Most issues
of CBG are built around a cover theme and most of the time I poke
good-natured fun at editor Brent Frankenhoff about the themes or,
as he might put it, give him grief.

I confess I don’t much like writing around themes, especially when
the themes repeat year after year. Like the New Year’s Day issue
and the Valentine Day’s issue and the Holiday Gift Guide issue. As
a proud member of the 99%, I believe CBG sometimes concentrates too
much on the elite 1% of holidays and ignores “lesser” celebrations
like Take Our Daughters And Sons To Work Day (April), International
Nurses Day (May 14) and, of course, Go Skateboarding Day (June 21).
I’ve been working on my kickflip since last June.

Despite my aversion to theme issues I didn’t come up with - Where’s
my Godzilla issue? - I loved the notion of devoting an issue of CBG
to collecting or, as my daughter Kelly calls it, hoarding. When I
and other CBG contributors were asked to answer questions about our
collecting habits and history, I responded with as much enthusiasm
as I can manage without breaking something. I’m still a little bit
sore from last June’s ill-conceived “hippie jump” and still paying
the legal bills from it. How could I know the trick didn’t require
the use of actual hippies? I am so sorry, Moonbeam.

Here are questions asked by Brent Frankenhoff, hereafter referred
as Most August Kind Editor, and answered by yours truly, hereafter
referred to as Yours Truly...

MOST AUGUST KIND EDITOR: Where do you buy your back issues? Online,
at shops, at antique stores, flea markets...

YOURS TRULY: With two kids in college, I don’t buy many back issues
these days. In the past, eBay was my main source for back issues
and remains so.

MAKE: What's your favorite find? Doesn't have to be a comic book,
but should be comics-related; toy, poster, shirt, autograph, piece
of art, etc.

YT: I don’t have one favorite find. I was delighted when I came
across original art I’d accumulated over the years, as well as a
bunch of original plots and scripts from stories I’d written. A
few of them date back to before I went to work for Marvel in 1972.

Back when I could afford more back issue shopping, I was pleased to
complete my collections of Cosmo the Merry Martian and the Presto
Kid issues of Red Mask. Other delights were back issues of Gorgo,
Konga, Reptilicus/Reptisaurus, and, from Quality Comics, Candy and
The Barker. I also loved getting the Alan Class reprints from the
U.K. when I could find them at reasonable prices.

If I had to narrow it down to just one, it would probably be Stan
Lee’s Secrets Behind the Comics. I found at copy at the first New
York Comic-Con I attended. A few years later, I was working with
Stan and got him to autograph it for me.

MAKE: What's your holy grail, the one item you're in search of?

YT: I don’t have a holy grail per se, unless you want to count my
wild fantasy of my parents finding a box with all the copies of
Treasure Chest I got while attending Sts. Phillip and James grade
school in Cleveland. Back then, I didn’t truly appreciate the
great artists and writers who worked on those comics.

MAKE: If you sell or have sold comics, where have you sold, how do
you sell, what advice would you give to a seller starting out?

YT: In recent years, I have had some success selling comics and
original art at conventions, on eBay, to private collectors, and at
a garage sale. At my garage sale and at conventions, I shoot for
volume sales with ridiculously low prices. In the other venues, I
got for fair prices that work for both me and the buyers.

My advice to new sellers would be to do their research online and
elsewhere, and to have realistic expectations for what their comic
books and other items will sell for. Depending on where you are,
you can’t expect to get top dollar unless you have truly rare stuff
in amazing condition.

MAKE: What's your biggest regret in either buying or selling comics
or both? Can also cover a trade deal you made at some point in your
collecting career.

YT: My biggest regret is not closing my comics store about three
years before I did. The last years were defined by dishonest
employees, terrible landlords, disappearing customers, an poorly-
conceived charity venture, and a now-disbarred lawyer, who remains
the absolute worst person I ever met in my life. Had I closed the
store earlier than I did, I would have avoided all of the above and
walked away with money in my pocket and tons of inventory. Sigh.

Not to worry. I won’t end today’s blog on that depressing answer.
Shortly after CBG #1689 was received by subscribers, a reader
sent me a box of rare old Treasure Chest issues. Just his way of
thanking me for my columns and comics stories.

He had put together a complete collection of Treasure Chest and had
the issues bound into hardcover volumes. The comics he sent to me
were his duplicates from that endeavor. I was truly surprised and
delighted to receive such a generous gift.

There are some exceptionally nice and wonderful people out there in
comicdom. I think those people would be a great theme for a future
issue of CBG. I’d vote for that over the National Ice Cream Month
(July) issue.