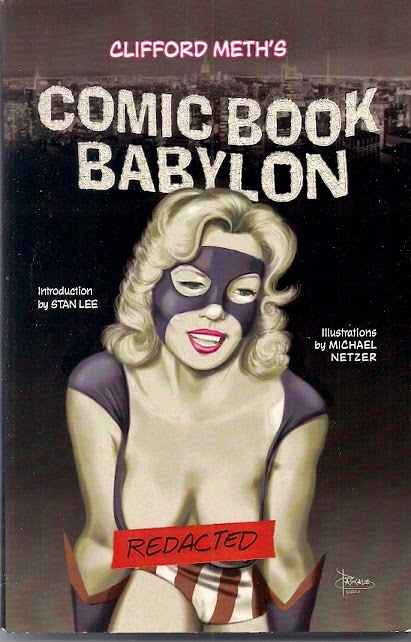 "Who are the real villains? Green Goblin? Dr. Doom? The Brotherhood of Evil Mutants? Or the corporations publishing comics and leaving creators penniless? You be the judge."

Clifford Meth’s Comic Book Babylon [Aardwolf Publishing; $26.95] is a collection of columns on the comics industry and related topics. Most were published online, several were not published online and appear here for the first time.  Before I started writing my review of the book, I did something I’ve rarely done before. I read other reviews of the book, the better to get a handle on what I wanted to say in my review.

Meth can be maddening. In these columns and elsewhere, he plays his “tough jew” persona so loud and so often that there are times when I just don’t want to listen to him. One of the reviewers mentioned  said Cliff can be a jerk and I don’t dispute that.  But it always comes back to Meth having done considerable good for some beloved comics creators and I take him back into my heart.  I think I have a complicated relationship with him.

So, if it pleases you online judges, I will stipulate that Clifford Meth can be abrasive, insulting, loud-mouthed, pushy, and, yes, at times, a jerk.  The prosecution can thus refrain at this time from further consideration of his myriad faults.

Comic Book Babylon discusses those often imaginary “work-for-hire” agreements that corporations have used to deny creators their fair share of the pie and which uninvolved fans have blindly accepted as being always the case. It follows the herculean efforts of Meth and legendary comics hero Neal Adams to get a share of the pie for the late Dave Cockrum and Dave’s tough-as-Adamantium wife Paty. There are dozens of pieces about or mentioning a blazing galaxy of comic-book stars, even beyond the introduction by Stan Lee and the fine illustrations by Michael Netzer.

I will not predict how the reader will feel about Meth after he or she has read this collection. What I will predict is that he or she will come away from the book embracing two truths.

One. Comic-book publishers have rarely treated comic-book creators with the respect and rewards they deserve.

Two. The comic-book community is one of the most giving and loving of all communities.

Further full disclosure. Meth is working on a second book of this nature. He has asked me repeatedly if I want him to write about my own frequently unhappy experiences with the comics industry. I am declining that kind offer because it’s my story to tell in my way, because I’ve written a lot about my career in previous installments of this bloggy thing of mine and because there are other creators
who need Cliff in their corner much more than I do. I’m not going anywhere anytime soon. There is plenty of time for me to be a pain in the ass to them what deserves it.

Comic Book Babylon is available from Aardwolf Publishing.  If you only care about the comic books themselves and not the creators of those comic books, you should probably not buy it, though I admit I kind of sort of think someone should beat you over the head with a copy of this book. If you understand those comic books you enjoy came into being through the creativity, hard work and incredible talent of for-real human beings, then you really have to buy and read this book. Sometimes a jerk can lead us all.

This is where I should probably tell Cliff that I love and respect him. But then things would just get weird.

I’ll be back tomorrow with another rip-roaring edition of “Rawhide Kid Wednesday.” See you then.

Posted by Tony Isabella at 5:54 AM