THIS MADE ME LAUGH 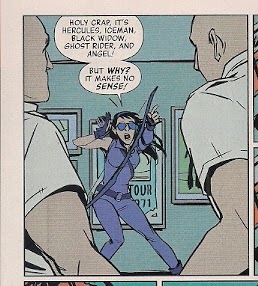 Kate “Hawkeye” Bishop will get no grief from me over her inability to make sense of the roster of the Champions, the short-lived Marvel super-hero team of the 1970s. It didn’t make a lot of sense to me either, and I was the guy who “conceived” and wrote the series launch some four decades ago.

The short version...I originally pitched the Champions as a “buddy book” starring the Angel and the Iceman, who has recently left the X-Men. It was Route 66 with mutants, just two good-looking heroes from different backgrounds traveling the country, meeting gorgeous young woman and helping people wherever they went. I thought that teaming the wealthy Warren Worthington with the middle-class Bobby Drake would be great fun.

So...when I came across the above panel in Hawkeye #16 [February, 2014] by writer Matt Fraction, artist Annie Wu, color artist Matt Hollingsworth and letterer Chris Eliopoulos, I did that LOL thing that all the youngsters text about. It made my day.

This is a shorter-than-usual bloggy thing on account of tomorrow is Father’s Day and Monday is the 30th anniversary of my marriage to Sainted Wife Barb.  I figured you’d understand if I took it a wee bit easy so that I could enjoy those celebrations.

I’ll be back on Tuesday with another installment of my award-lacking JULY 1963    series.  See you then.