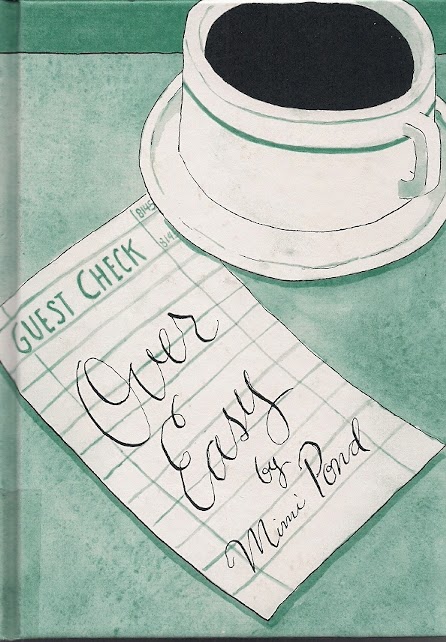 Today’s mission, should I choose to accept it, is to review several books and comics. We begin...

Over Easy by Mimi Pond [Drawn and Quarterly; $24.95] is a kind of memoir. I don’t know how closely Pond’s life and experiences mirror those of the graphic novel’s Madge, an artist who abandons college to work in a California diner. I do know that Pond drew me into the book's 1970s time capsule and kept me fascinated with her characters and settings from start to finish. Despite its 272-page length, the book never seemed long and, when I reached its conclusion, I wished there were more pages.

Each and every aspect of Over Easy unites in service of the story. Pond’s writing and especially dialogue always “sound” right to my writer’s ear. Her characters - hippies, punks, cooks, waitresses, customers, drug dealers, poets and artists - are believable despite their wild sides. Her storytelling flows smoothly; I was especially impressed with her effective use of full-page panels. The story is duo-tone, black/white and mellow light green. The hardcover book lies in the hands comfortably. It is a thing wonderfully made.

We’re not quite halfway through 2014, but I’m confident Over Easy will be a contender in next year’s comics awards and deservedly so. It’s a great time to be a comics reader.

Courtesy of my local library, I’ve read the second and third books of Midnight Secretary by Tomu Ohmi [Viz; $9.99 each].  I reviewed the first book back in November, so I don’t have a lot to say about the series this time around.  Just two things really.

I’m enjoying how the relationships in this book are developing in the business storylines and the intimate/personal storylines. I’m beginning to find more that’s admirable in vampire boss Kyohei and I cheer the continued growth of secretary Kaya.

Ohmi draws really well. His drawings of Kaya are incredibly sensual and, no matter how she’s dressed or undressed, she’s as sexy as she is capable. There’s a reason this manga series has a mature rating.

All-New X-Factor by Peter David and Carmine Di Grandomenico [$3.99 per issue] has quickly become one of my favorite super-hero comics, which isn’t surprising since David’s previous X-Factor was also one of my favorite super-hero comics. As he did in the previous series, David has thrown together an odd assortment of mostly mutant heroes - Gambit, Polaris, Quicksilver, Danger, Cypher, Warlock - and given them a clever reason to be a team.

X-Factor is owned and operated by Serval Industries, a really big corporation headed by CEO Harrison Snow. While the super-team has some autonomy, they take on various assignments for Serval and even garner some favorable publicity.  Yes, Snow has some secrets he’s not sharing at this time, but what CEO doesn’t?

David’s stories are full of surprising developments. I am fond of the atypical hero interplay and the corporate stuff.  The title is pretty much self-contained, which is another plus for me.  I like All-New X-Factor a lot. I think you will, too.

Suggestion for Marvel. Every year or two, you should just throw a half-dozen random characters at David and have him make a team out of them.  I think he’s up to the challenge.

Furious [Dark Horse Comics; $3.99 per issue] is brand-new territory for Mice Templar writer Bryan J.L. Glass. It’s his first super-hero series and he’s brought something new and enticingly disturbing to the game. Celebrity Cadence Lark seeks to atone for the myriad sins of her past life by becoming the Beacon. But her super-heroics are fueled by a sometimes out-of-control rage and it’s not long before the media is calling her Furious.

Cadence is one of those celebrities the media and the public love to hate. As she seeks redemption, she struggles with the weight of her past and her reputation. She’s not always a likeable character, but you want to see her succeed in her quest.

The first five issues deliver a satisfying story, solid writing and terrific art by Victor Santos. These issues will be collected in a trade paperback to be published in September. It’s definitely worth checking out.

Adventures of Superman [DC; $3.99 per issue] continues to be a mix of the good, the bad, and the ugly. I read AOS #11-13 this week and was only impressed with one of those issues.

Jim Krueger’s “The Dark Lantern” was a so-so story about the Green  Lantern who was on call when Krypton exploded. It’s readable, but no better than the average pre-Byrne stories or, for that matter, most of the post-Byrne stories. It was in issue #11.

The ugly goes to Peter Milligan’s vile “The Demolisher” in AOS #12. Superman adopts a second costumed identity so that he can maim and mutilate villains without tarnishing his reputation. When the new identity becomes more popular than Superman, the Man of Steel turns “the Demolisher” into a villain so that people will appreciate him more. Then he fakes the Demolisher’s death. I don’t know who’s more clueless about who Superman is: Milligan or the editor who bought this piece of shit.

The good? That would be B. Clay Moore’s “Exposed!” in Adventures of Superman #13. It’s a thoughtful exploration of a failed newsman who is determined to regain his former stature by pursuing a story that would damage Superman’s effectiveness. It kept me turning the pages and it delivered a satisfying ending.

Isn’t it well past time for DC to plug the plug on the moronic “New 52" and get back to stories like Moore’s?  Or will we just have to wait for the inevitable day when Warner decides the current regime isn’t doing these legendary characters any good and may, in fact, be hurting their long-term profitability?

That’s all for today, my bloggy friends. I’ll be back tomorrow with another installment of my JULY 1963 series. See you then.

Posted by Tony Isabella at 1:59 AM