FRIDAY WITH THE FUNNIES 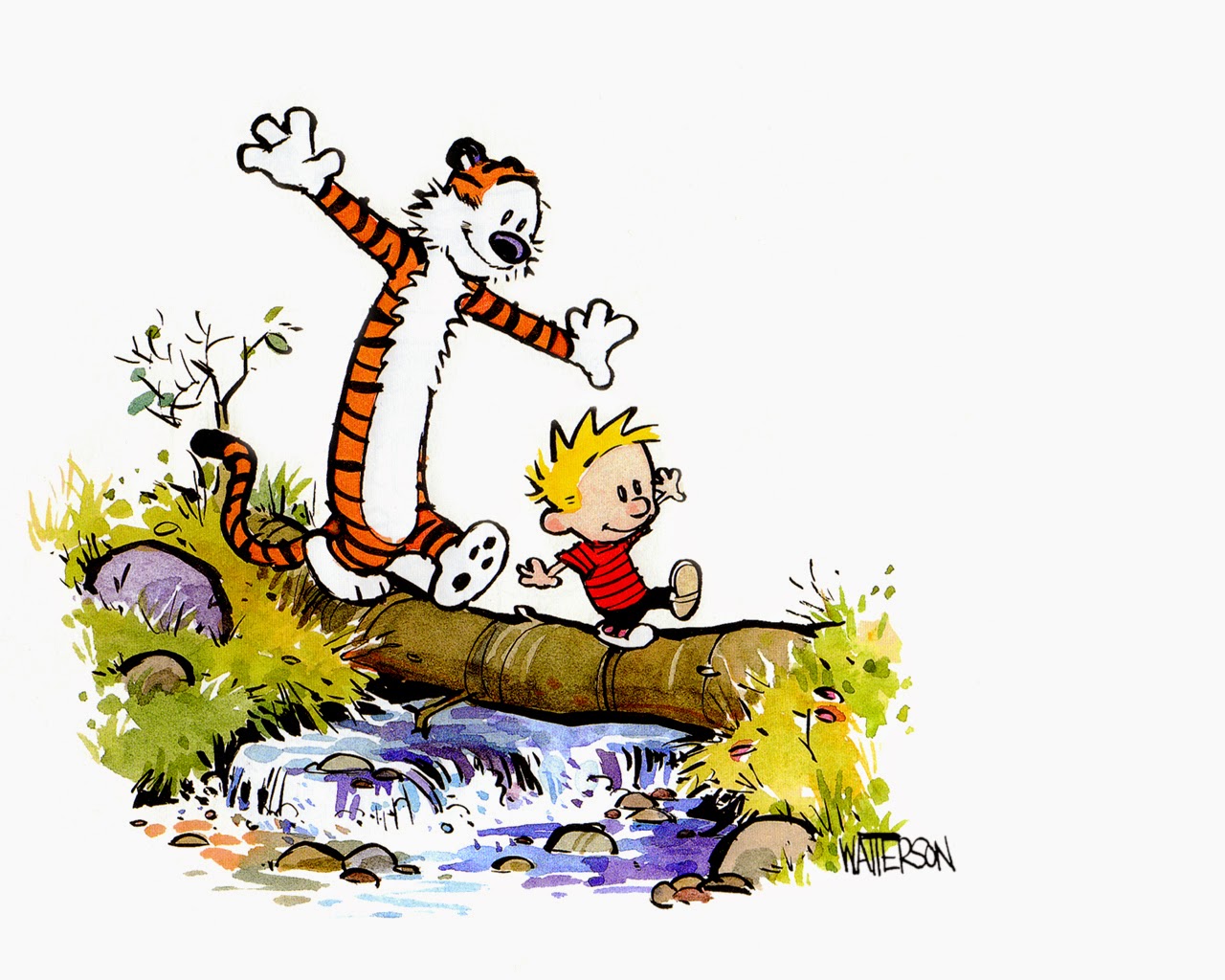 I’ve been writing for the “funnies” - newspaper comic strips - for a few years now, assisting several different clients with scripts, plots and gags. It’s challenging, enjoyable work and I think I’ve gotten pretty good at it. However, every morning, I read a week’s worth of Bill Watterson’s The Complete Calvin and Hobbes [Andrews McMeel Publishing; $100] and realize how far I must go before I can come close to truly mastering the art and craft of the comic strip. It’s a humbling start to the day.

The glorious boxed set was a gift from my Sainted Wife Barb and our kids several birthdays ago. I don’t read a week’s worth of Calvin and Hobbes every morning to rein in my ego - though it manages to do that all the same - but because it is a brilliant body of work filled with heart and laughter and wisdom. I read the three volumes from start to finish...and then I start over again.  I’ll keep and read these books until I’m too feeble with age to turn their pages and too unloved to get anyone to do it for me.

I love newspaper comic strips. I own many collections of them and I have read many collections of them. It’s an American art form to me because, with the possible exception of Peter O’Donnell and his brilliant Modesty Blaise, I don’t think anyone does it as well as we do. Which makes the slow demise of this art form, hand-in-hand with the demise of the print newspapers, sad on different levels.
One of those is...damn, I find out I’m good at something just as it is going away forever.

Another is that, despite the thousands of webcomics that appear on the Internet, often alongside the print strips, I don’t think even the best of the webcomics have reached the heights of the classic newspaper strips. Maybe they will someday. Maybe I’ll even figure out how to make an online strip of my own creation as satisfying to me as my anonymous print contributions. But they just aren’t there yet. I expect this paragraph will garner a great many hostile and snarky comments from online comic strip readers. Well...“danger” is my middle name or would have been if my parents had realized what kind of creature they had spawned.

The Complete Calvin and Hobbes is a forever keeper. That’s not true of every newspaper strip collection I own. For example, I finished reading Archie The Swingin’ Sixties Dailies Volume 1: 1960-1963 by Bob Montana [IDW Publishing; $39.99] and decided against buying the second volume of the strip.

Montana’s strips ignore the Archie/Betty/Veronica love triangle to focus on gag-a-day strips that seldom bring out the classic nature of the Riverdale citizens. In all fairness, the modern-day Archie comic books are losing that sense of the classic as well, focusing as they do on big gimmicky story arcs that take several issues to tell stories not nearly as satisfying as writers like Frank Doyle and George Gladir could tell in five or six pages.

There are some funny gags in this Montana collection and even a few glimpses of the “real” characters. But the construction of the gags is often awkward and the punch panels fall flat. I look at the book and know I can’t learn anything from it and that I’ll never read it again. So it’ll go into my online sales and, if it doesn’t sell there, into my garage sales.

Among the other comic-strip collections I’ve read recently, I got a kick out of The Complete Funky Winkerbean Volume 3: 1978-1980 by Tom Batiuk [Kent State University Press; $45] and Strike Four! The Crankshaft Baseball Book by Batiuk and Chuck Ayers [$24.95]. These are keepers for many reasons.

These have been two of my favorite strips for decades, even before I met Tom Batiuk and we became friends and I started working as an occasional assistant to him.  A bonus of that relationship is that I can ask him questions about decades-old strips and listen as his aging brain-gears grind as he tries to remember an individual strip among the tens of thousands he’s done.

An obvious reason for keeping the books is that, from time to time, they come in handy when I’m doing some work for Tom.  Beyond that, I admire Tom and Chuck’s skills at this comic-strip stuff and have learned from the collections.

The two key reasons for my keeping collections of humorous strips are that I love them and that I think I can learn from them.  So I will certainly hold on to my Peanuts and Garfield books.

The same with Bobby London’s Popeye collection. I was fascinated by his mostly minimalist but still contemporary take on Popeye and his supporting cast. I might be able to incorporate some creative ideas  from London’s work into my home.  That won’t be the case with the wonderful Barnaby books by Crockett Johnson. I find them completely charming and well worth reading once, but I don’t see myself being able to take anything from them for my own work.

Superman: The Silver Age Newspaper Dailies Volume 2: 1961-1963 by Jerry Siegel and Wayne Boring [IDW Publishing; $49.99] was just as fascinating from a historical standpoint as the first volume. For now, those two books are keepers because, sometime this summer, I want to reread the strip stories collected in these volumes side-by-side with the comic-book stories from which they were adapted. I don’t think I can learn anything from these 1960s strips, but I’m convinced reading the earlier Superman dailies and Sundays from the 1940s will be useful for me.

My other educational and entertaining story-strip favorites include  Modesty Blaise, Dick Tracy and Terry and the Pirates, all of which I hope to reread over the next few years. I’m already rereading Lee Falk’s Phantom regularly.

I also love IDW’s Rip Kirby and Russ Manning Tarzan collections. I think the former is worth studying and the latter, because so much of it relies on Manning’s incredible art, won’t be as helpful to me as a learning tool. I plan on holding on two these books for quite some time to come.

I’m almost certainly leaving out other comic-strip collections that will remain a part of my Vast Accumulation of Stuff even when that VAOS gets whittled down to an actual collection. I see many proud bookcases in my future.

The comic strips were the best and most honest part of that lousy rag and, before long, I was buying out-of-town Sunday newspapers to that I could read even more comic strips. Later publications like the late lamented The Menomonee Falls Gazette fed that passion even more.

These days, between the three daily newspapers I get - talk about overcompensating for one’s childhood deprivations - and the amazing availability of comic strips on the Internet, I probably read close to two hundred comic strips and comic panels and editorial cartoons every day. I consider that time well spent.

Look for some further comic-strip conversation in the near future.

Posted by Tony Isabella at 4:43 AM