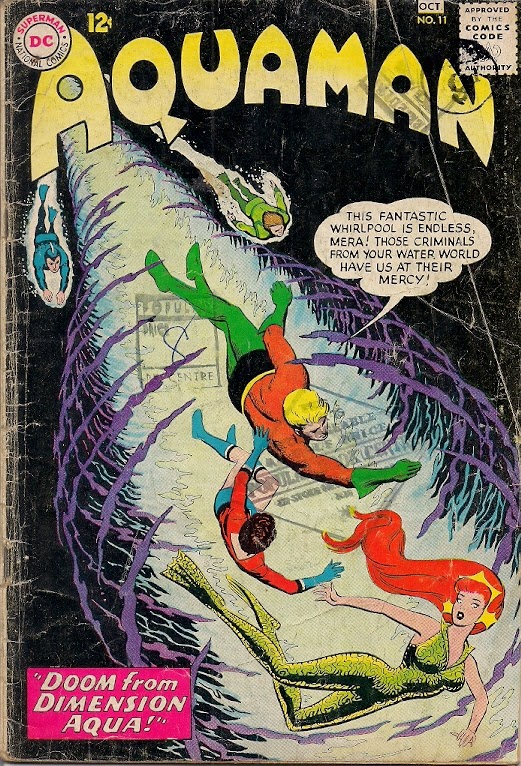 I had a tough time tracking down a copy of Aquaman #11 [September- October 1963], much less an affordable copy. I hadn’t realized the issue had the first appearance of Mera, who would go on to become Aquaman’s wife in most incarnations of the character. The story has only been reprinted once in 2008's Showcase Presents Aquaman Volume Two. On that solitary occasion, it was printed in black-and-white.

The inside front cover is a full-page advertisement for the “Made Simple Self-Taught Encyclopedia,” which was discussed in an earlier installment of this JULY 1963 series.

“The Doom from Dimension Aqua” is by Jack Miller. It runs 25 pages, but the bottom third of the last page of each of its thee chapters has an ad for Tootsie Rolls and Tootsie Roll products.

Aquaman and Mera meet cute in the first chapter, at least by comic-book standards. He and Aqualad come across an abandoned ship that is running wild. They have to get the ship off the sea lanes before it hits another vessel. However, before the heroic duo acts, they are grabbed by giant pincers that form out of a coral reef. By the time they escape and swim back to the ship, they are greeted by an equally surprising sight:

Aqualad! A wave–-it’s being suspended over the ship and acting like a giant magnifying glass!

And then, following a huge BLAM:

Great waves! The hold of that ship must’ve been loaded with dynamite–-and the magnified rays of the sun set it off!

In the next moment, a woman swims by them as a fantastic speed that only they can match. When they catch up with this “sea witch,” she forms a bubble out of water and floats upward out of their reach. A few seconds later, she seems to weaken, the water bubble bursts, and Aquaman catches her. Mera has lost her powers and fears Aquaman will hurt her. Aqualad responds:

You don’t understand...I saved you! I was nearby when the crew abandoned that ship–-because the fire in the hold when out of control and threatened to blow up the explosive cargo!

Aquaman realizes she was moving him and Aqualad out of harm’s way. Mera then identifies herself:

I am–-or was-–Queen Mera of a watery world in another dimension! You seem everyone in my world has the ability to will the water to do his bidding!

Mera was forced to flee when the pretender Leron reached the gates of her castle. The scientist Xebel had discovered how to open up a dimensional warp leading to our world. Her loyal subjects wanted to keep her safe. Mera doesn’t know why she has lost her powers. They simply vanished without a trace.

Suddenly, several submarines are hurtled out of the water and right at the trio. It’s the work of Leron the Usurper, who has followed Mera to our world to capture her.

Leron makes the water around Aquaman, Mera and Aqualad steel-hard. If Aquaman doesn’t hand over Mera, Leron will leave them to perish where they are. That’s when the first chapter ends.

The first chapter is followed by a full-page DC Comics subscription ad. Subscribers could save two cents per issue on a two-year sub to any and all of these titles: House of Mystery, Aquaman, Rip Hunter, Unexpected, Mystery in Space, Strange Adventures, Tomahawk, The Adventures of Bob Hope, Challengers of the Unknown and the Atom. That down-the-middle crease you find in so many old DC comic books of the 1960s? It’s because subscription copies were folded in half for mailing. Who knew?

The subscription ad is followed by “The Fantastic Frogmen,” a one-page prose article on the development of devices to allow people to breathe underwater. It packs a lot of information into the one page and reads well.

The article is followed by a full-page ad for Task Force, said to be “America’s Most Exciting War Game.” It’s only $1 plus postage. As is my policy, I’m not going to go into detail on advertisements that were discussed in earlier installments.

Chapter 2 - “The Super Sea Sleuth” - starts with a full-page splash of a scene that happens later in the chapter. In this page, Aquaman is exhibiting powers equal to those of Mera’s people. I wonder how writer Miller will explain that.

The trapped Aquaman calls “endless masses of twisting forms” - his fish friends - to smack Leron in the face and disrupt his control of the steel-hard water. Aquaman has a plan and leaves Aqualad to watch over Mera. More of Leron’s followers show up just as Aquaman rejoins them.

The heroes are trapped in a swirling funnel of water, but manage to escape. That’s when Aquaman challenges Leron and his men directly. The bad guys form a giant sword. Aquaman forms a watery shield and the sword smashes to pieces against it.

Aquaman then forms a watery magic carpet and sends Leron and thugs ducking for cover. He hurls water balls at the bad guys and forces them to retreat.

The secret of Aquaman’s powers? It’s Quisp, his water sprite pal. When Aquaman left, it was to recruit Quisp. Aquaman asks Quisp to bring back an army of water sprites to win back Mera’s kingdom from Leron. It’s a great plan...

...but Leron has been listening and watching the whole time, hiding in a hard-water shell that made him appear to be a big fish. He follows Quisp to stop him. That’s where the second chapter ends.

Digression. About half the time during the writing of this bloggy thing, I typed “Lebron” instead of Leron.  I thought I was over Mr. James leaving the Cleveland Cavaliers to play for the Miami Heat. Maybe not. End of digression.

The second chapter is followed by a half-page “Homer” gag strip by the great Henry Boltinoff. It’s paired with a half-page ad for the Palisades Amusement Park. I’m going to scan this page and present it as an addendum to today’s bloggy thing.

The third chapter - “Prisoners of the Water World” - is a full-page title splash showing a scene that will happen later in the chapter. Aquaman, Mera and Aqualad are trapped in a rounded coral cage with Leron telling Xebel they’re doomed if the scientist doesn’t give the pretender the secret of creating dimensional warps to our world and other worlds.

Leron makes underwater tornadoes that knock Quisp into some rocks. Leaving the unconscious water sprite, Leron and his thugs chase and capture Aquaman and company. They take them back to Mera’s world, imprisoning them in the aforementioned coral cage. The threats are made and Xebel is given time to consider his options.

Aquaman wipes a smudge off Mera’s arm just as Leron and his thugs enter the cave. But, amazingly, Mera’s powers have returned and she sends the bad guys hurling out of the cave.

Aquaman puts it all together as they flee. Spotting an incredibly convenient oil tanker, he orders to swordfish to pole holes in one of the ship’s tanks. The oil drenches the water Leron and his men are swimming through, robbing them of their powers.

Aquaman explains this to Mera:

It was oil that robbed you of your powers–-which returned when I rubbed the oil smudge off your arm!

Oh? But oil has no such effect on us! Only lead would weaken our powers–-and there is no lead anywhere around!

Oh, yes, there is! Practically all refined oil contains a high percentage of lead!

Mera returns her prisoners to her world where her loyal followers  wait. She says she has become very fond of Aquaman and asks if she can visit him again. He would love to see her anytime.

Quisp shows up just as the warp closes. He wanted to say goodbye to Mera. Aquaman has a hunch they’ll be seeing her again soon.

Possible romantic interests for Aquaman had appeared a few times in earlier stories, but none of them made a lasting impact. Mere was clearly a keeper, though.

I don’t recall if Mera’s weakness to lead was ever used in future stories. I was only buying Aquaman  sporadically circa 1963...until high-school jobs gave me enough of an income to buy pretty much all the super-hero comics I wanted. So, if the bit was used again, I might have missed it. Of course, in modern times, what with rapacious oil companies having dumped so much oil into our oceans, Mera might be powerless all the time.

The rest of the issue is filled with familiar ads. You could get a 104 Kings Knights for $1.49 or 150 Civil War Soldiers for the same price. Wallace-Brown was still trying to get comics readers to sell its Christmas cards. The American Body Building Club offered a ten-cent book on building your body. That last was on the inside back cover of the issue.

The back cover offered 100 Toy Soldiers for $1.25. They came packed in their own footlocker.  I wonder if there are any photos of these soldiers online. I’ll have to look.

I’ll be back later in the week with another installment of my life-affirming JULY 1963 series. I’ll be back tomorrow with something, but I haven’t decided what it will be.