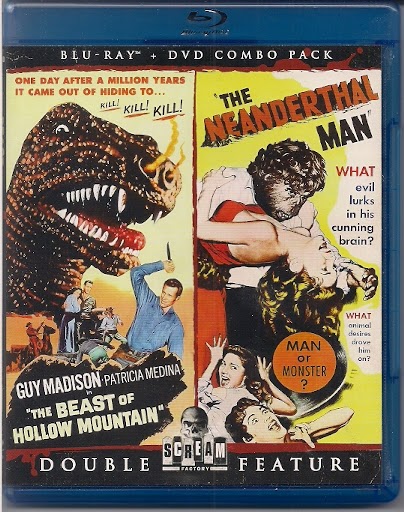 I watch a lot of monster movies. Here’s what I thought of some of them...

An American cowboy living in Mexico discovers his cattle is being eaten by a giant prehistoric dinosaur.

Wikipedia claims this is the first movie to combine dinosaurs and cowboys, a winning combination for the young Tony Isabella when I first watched the movie on late-night Cleveland television.  I was disappointed there was only one dinosaur - an Allosaurus - and that the creature didn’t show up until relatively late in the movie, but I still got a kick out of it.  Just as I did when I watched it again.

American cowboy Jimmy Ryan (Guy Madison) has it real bad for Sarita (Patricia Medina), who is the daughter of a leading citizen of the Mexican village where the movie takes place. The attraction is not one-sided, which angers Enrique (Eduardo Noriega) the richest guy in town on account of he and Sarita are supposed to get married any day now. Enquire tries to ruin Jimmy’s ranch to drive him from the town. Just as I got weary of the south-of-the-border testosterone, the legendary Beast shows up.

The movie is based on a story idea by noted special effects wizard Willis O'Brien, who co-wrote the script under the pseudonym El Toro Estrella. He was supposed to do the special effects for the movie, but that never happened. The same story idea inspired The Valley of Gwangi (1969), a much superior dinosaurs and cowboys movie which is also a favorite of mine.

Two supporting characters - a young boy and his alcoholic father, still grieving over the loss of the boy’s mother - are the actual heart of the movie. When something bad happens to one of them, it is a honestly devastating moment.

The final battle between the Beast and the cowboys is not exactly a special effects classic, but it moves fast enough to work well. There is some genuine suspense and a satisfying conclusion to the conflict. I like the movie enough to keep it and likely watch again in a few years.

The Neanderthal Man was a one-and-done viewing. The best part was watching decent journeyman actors like Robert Shayne, Robert Crane and Beverly Garland try to make something out of weak dialogue and a frankly silly story. The IMDB sums it up:

Professor Groves, expert in prehistoric life, proves his theories with an extract that'll regress a cat to a saber-tooth tiger and man to a Neanderthal.

Groves, played by Shayne, turns a tabby into a sabertooth, his maid into a cat-woman (only seen in photographs) and himself into this faux-caveman. Shayne plays the scientist as a total D-bag.  He is nasty to his daughter, his fiancee, Crane’s intrigued scientist and a group of fellow researchers who think Groves is off his rocker.

The sabertooth kills some cattle and people. The professor kills a few more. The final match is between Groves and the sabertooth. I’m sure you can figure out how that ends.

The movie was directed by German E.A. Dupont from a painfully weak and choppy script by Aubrey Wisberg and Jack Pollexfen.  Here are a couple of “interesting” facts about the movie.

The imperious Professor Groves mistakenly tells the other science nerds that Neanderthals are higher on the evolutionary chain than Cro-Magnon man.

Robert Shayne’s name is misspelled in the credits as Robert Shane. Maybe it was deliberate. Maybe Shayne was going for some plausible deniability for his part in this turkey.

The long-toothed fangs of the sabertooth tiger come and go during the movie. They never look remotely convincing.

The last line of dialogue in the movie made me wince:

He tampered with things beyond his province...beyond what any man should do...and if it was madness, well...those whom the gods would destroy... they first make mad!

I do have a vague memory of watching a few minutes of this movie as a kid. Given my willingness to watch any monster movie back then, I think that says a lot about how bad the movie is.

Our last movie for today is a strange one: Demeking the Sea Monster [2009]. The DVD is not generally available in the United States and I purchased my copy on eBay. The box says its running time is 101 minutes, but it really seems longer.

From the back cover of the DVD:

In 1969, a young man named Hachiya finds an anonymous letter in a glass bottle which foretells of the apocalyptic arrival of a cosmic monster known as Demeking. Since then, he has physically prepared himself in a long struggle for that fateful day when the monster will arrive.

If you managed to grab a copy of this movie, don’t hold your breath waiting for that fateful day. The closer we come to it is a dream sequence another character has. From Dread Central:

Set in a dreary port town in 1970, the story revolves around a group of boys led by the older Kameoka (Kohei Kiyasu) who form their own exploration group. One day Kameoka meets a strange man named Hachiya (Takeshi Nadagi) who works at the local amusement park. Hachiya is convinced a vision of the future he experienced is real, and one day he will have to fight a giant monster called Demeking to stop it from destroying Tokyo. When the time comes, Hachiya suddenly up and leaves. However, with the guidance of a note he leaves behind, Kameoka and his friends set off on an adventure to discover the true nature of Demeking.

Kameoka is the one who has the dream I mentioned above. He and his young explorer pals get far more screen time than Hachiya and the difference in their age gets a little creepy.

The acting and characters aren’t bad. Looking at a future working in the family tofu shop, Kameoka’s desperate yearning for something more exciting than a life where he’s bullied by just about everyone in that life is portrayed in compelling understated fashion. Those young kids he hangs around with look up to Kameoka - maybe the only ones who do - and are game little adventurers. Hachiya spends most of the movie being mysteriously boring.

While I appreciate the attempt to make a different kind of monster movie, the high point of Demeking is that dream sequence in which Kameoka witness the destruction of his city and his own demise by a giant fire-breathing snail. The cosmic monster isn’t similar to any other kaiju I can recall and the sequence is exciting.  I wish there had been more of it in the movie.

Demeking the Sea Monster is in Japanese with English subtitles. I only recommend it to the kaiju fanatics.  It’s not a movie I would watch a second time, so it’ll probably end up in one of my online sales before too long.

I’ll have more monster movie reviews for you tomorrow.

Posted by Tony Isabella at 3:28 AM