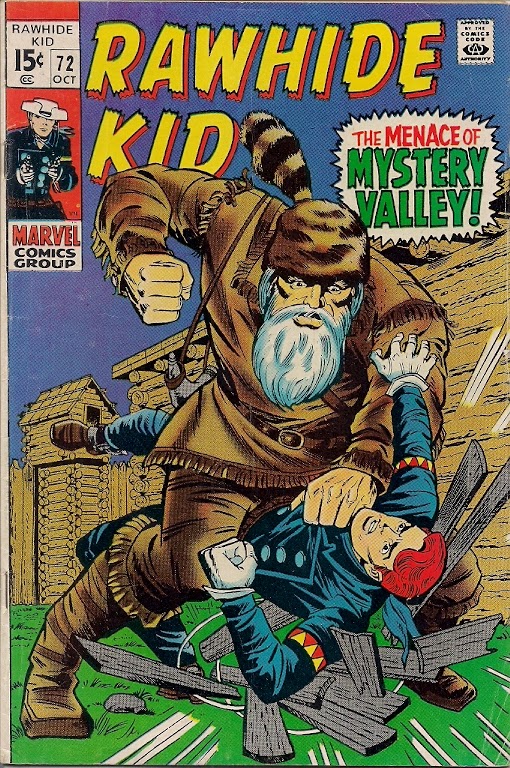 The Rawhide Kid is my favorite western comics character and one of my favorite comics characters period.  Something about the short of stature (but big on courage and fighting skills) Johnny Clay spoke to the short of stature (but big on comics-reading skills) teenage Tony Isabella.  After rereading the Kid’s earliest adventures when Marvel Comics reprinted them in a pair of Marvel Masterworks and an Essential Rawhide Kid volume, I wanted to reacquire every Rawhide Kid comic, reread them and write about them in this bloggy thing of mine. This is the 57th installment of that series.

Johnny is duking it out with a mountain of a man on the cover of Rawhide Kid #72 [October 1969]. The art is by Larry Lieber (pencils) and Mike Esposito. It’s a rare artistic combination, but it sure made for a dramatic cover image.

“The Menace of Mystery Valley!” (22 pages) is another great Rawhide Kid story that has never been reprinted. Writer Lieber delivers a different kind of western adventure while penciler Lieber goes big with his action scenes and panel layouts. John Tartaglione is back as inker and does his usual terrific job on the story.

The story opens with the Kid having left Texas and ridden north in the hope of finding peace and quiet. What he finds is the kerchief of a missing girl, just as a search party rides up and recognizes him as a wanted outlaw. The searchers aim to take the Kid in. The Kid aims not to be taken in.

Though outnumbered, Rawhide manages to disarm the searchers without doing them serious harm. He tries to shake them, but they know the terrain better than he does. Desperate he tries to lose them in the woods. But these aren’t just any woods.

Jumpin’ catfish! Look where the fool is headin’!

If even half the stories whispered about the place are true, the Rawhide Kid is a goner!

The searchers leaves Rawhide to what they assume will be an awful fate and get back to looking for the missing girl and her equally missing brother. The Kid figures he’s in the clear...until he hears a growl that’s louder and more eerie than anything he’s ever heard before..and spots the largest bear tracks he’s ever seen.

The bear isn’t just enormous. He’s glowing. Rawhide and his horse Nightwind try to outrun the critter, but they can’t shake him.  The Kid fires at boulders on a hill and loosens them enough to start an avalanche that forms a barrier between them and the “ghost bear.” Leaving the forest, Rawhide is amazed at what he sees:

There’s a valley beyond! A beautiful, lush world that time almost seems to have forgotten!

The Kid is spotted by the title-named “menace” of this valley, who fires at Rawhide. Frontiersman Jason Cragg never misses.  He only wanted to graze the intruder and knock him out. He carries the Kid to a stockade that also imprisons the missing children.  Thinking the grownups were just trying to scare them with their scary tales of the haunted forest, the youngsters had also stumbled onto this hidden valley.

Cragg brings food to his prisoners and then tells them his story. It’s a tale that reveals the old man is different than any of the Kid’s usual foes. I like it so much that I’m going to post the page as an addendum to today’s blog.  Go read that and then return for the rest of the summary.

And now you know why I can’t let you leave! If the outside world learns of my fertile valley, settlers will come! Ranchers, farmers, then the railroad! That mustn’t happen!

The Rawhide Kid respects Cragg’s strong feelings, but he’s not about to spend the rest of his life in a stockade. He throws a rope over a beam and swings into the door with enough force to make an opening. Figuring he’ll need his guns to escape with the kids, the Kid heads for Cragg’s cabin. The frontiersman spots him and the brawling is on: Rawhide versus a man four times his age.

Whether it’s because of his own natural vitality or something about the valley, Cragg is easily the equal of his younger opponent. You can almost hear the punches land in the epic two-page fight scene.

The Kid manages to knock Cragg out for a few minutes, long enough for him to get the kids on Nightwind and make a dash for freedom. But the old man is on their trail quickly and he has his rifle with him.  Rawhide is running out of options.

RAWHIDE: Cragg isn’t a villain! He’s a man who’s fighting to protect his home and way of life, from a world that he doesn’t understand! I–-I can’t just gun him down!

Fate intervenes in the form of a rattler than spooks Cragg’s horse. The old man hangs onto the edge of the cliff by his fingertips and he knows he can’t hold on for much longer. Rawhide rides back to help him:

I can’t just let him die...maybe because I understand him too well. Because we’re both alike...both loners at odds with our time!

The Kid tosses Cragg a rope and Nightwind pulls the man to safety. Knowing he owes Rawhide his life, Cragg gives the kid and the two children safe passage. The Kid and the youngsters vow to keep the secret of the valley to themselves. Still, when the young boy asks if the valley will remain as it is, Rawhide tells him the sad truth of the matter:

Sooner or later, other folks will discover it, and settle there just as Cragg did! Then the valley will change...

A western with meaning for our modern world. Is it any wonder that I consider Larry Lieber one of the very best comic-book writers of the 1960s?

The headline of this issue’s Marvel Bullpen Bulletins: THE LATEST AND GREATEST GOODIES FROM MANIACAL MARVEL! There’s an excitement on the page as Marvel expands its roster.

The first two news items on the page announce the end of the Merry Marvel Marching Society and the birth of Marvelmania International. Readers are told that the guy in charge of the new fan club is “a most talented California executive.” Within a couple years, Marvel would discover how badly it had misplaced its trust.

Other items praise the Captain Marvel team of Roy Thomas, Gil Kane and Dan Adkins...Sam Grainger’s inking of Sal Buscema’s pencils on Avengers...letterer Artie Simek playing the harmonica and spoons on the nighttime Alan Burke radio show...and the latest epics of Stan Lee and Jack Kirby in Fantastic Four and Thor. I can’t comment on Simek’s musical talent, but all the comics series mentioned above were and remain some of my favorites.

“The Mighty Marvel Checklist” includes the first issues of Chamber of Darkness, Our Love Story, Tower of Shadows, My Love, as well as 25 familiar titles. Lots of great heroes and villains appear in the super-hero comics: Silver Surfer, Mephisto, the Thing, Spider-Man, the Human Torch, the Lizard, Ultron, Thor, Galactus, the Falcon and many others. It was a great time to be a Marvel fan.

Three lucky readers got letters published in this issue’s “Ridin’ the Trail with Rawhide” page. Rick Grand of Long Beach, California thinks the Kid should look rougher and more trail-worn.

Jay Owens of West Monroe, Louisiana inquires when the Ghost Rider would return in The Mighty Marvel Western and when a new western hero called “Dark Arrow” would be introduced. Marvel’s response:

Actually, Jay, it was never “we” (meaning mixed-up Marvel) who said that the Ghost Rider would return, or that there would be a western feature called Dark Arrow. Those were rumors that you heard, based on a project that’s been canceled since then. However, maybe our hard-riding spectre will return one of these days...and we’re glad to know there’ll still be a lot of faithful ones out there who remember his name.

Digression. Comics rumors may not have spread with ths speed they do in these modern online times, but they were still a nuisance for the publishers and the creators.  I still recall learning in some local Cleveland area fanzine of the 1970s that I was doing layouts for Daredevil and Incredible Hulk. End of digression.

Jimmy Aldridge of Ontario, Canada admits he isn’t much of a western fan, but reports that he was really pleased by Rawhide Kid #70's “Night of the Betrayers.” Marvel was pleased he was pleased.

That’s all for this edition of “Rawhide Kid Wednesday.” Look for my next visit with the Kid in two weeks.

I’ll be back tomorrow with as many reviews of more recent comics as I can fit into a thousand or so words.

Posted by Tony Isabella at 7:05 AM