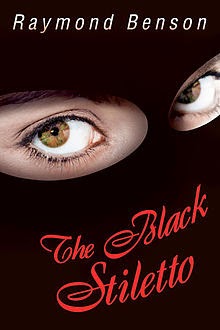 Somewhere around the last chapters of The Black Stiletto by Raymond Benson [Oceanview Publishing; $25.95), I realized I was seriously hooked on this masked heroine series in a way few other series have hooked me. Doc Savage did it when I was a teenager. Ed McBain’s 87th Precinct was forever a part of my life after I heard Don McGregor read a few select passages out loud while we were on a lunch break from our staff jobs at Marvel Comics. I was in my early 20s at the time. There have been others, but those were the two series that hooked me early and remain among my favorites.

The Black Stiletto narrative moves back and forth between the 1950s and today. The 1950s portion centers on Judy Cooper, eventually in her own words as she writers in her diary. Fleeing from an abusive stepfather, Judy goes to New York, gets a job in a diner, and gets a part-time job at and a room above a gym, courtesy of the former boxer who owns it. She also begins training in self-defense and a lot more, determined never to be victimized again. She’s a heroic young woman and, before long, her training expands, her world gets bigger and circumstances bring her to adopting a role as the masked Black Stiletto.

The modern-day portions of The Black Stiletto and its sequel, The Black Stiletto: Black and White (Oceanview Publishing, $25.95], is the story of accountant Martin Talbot. He is Judy’s son, though he has just now learned that his mother, who lives in assisted living due to Alzheimer’s, was the Black Stiletto. The revelation upends his already rocky life. A painful divorce. A college-bound daughter unwilling to play it safe. An uncertain employment situation...and now this seeming madness.

Benson writes a heck of a story. On the one hand, the origin of the Black Stiletto and her growth as a strong fighter for justice in a world of predators is glorious. On the other hand, we have one of her older enemies determined to track her down and get revenge for his slain brother and his five decades in prison.  Pulp action and scary suspense. I love this stuff.

The second novel continues these duel-but-connected stories of Judy and Martin. Mom (before she was Mom) contends with crooked cops and politicians, budding drug lords, the odd communist agent, and even an easy-on-the-eyes FBI agent. Martin is out of work, his daughter has been assaulted in New York and he’s being blackmailed by a man who has a movie that reveals his mother was the Black Stiletto. I got halfway through the novel when I realized that, yes, I was going to stay up all night to finish it.  Hooked. As I write this, I’m waiting to get a copy of The Black Stiletto: Stars and Stripes, which was published in April of 2013. A fourth book - The Black Stiletto: Secrets & Lies - came out earlier this year and there’s at least one more scheduled to be published sometime soon. I can’t wait to read them all.

I am gushing. It is unseemly for a man of my advanced years. So I will refrain from any further comments other than I recommend the Black Stiletto novels to one and all.

The Black Stiletto: Black and White

Coming up tomorrow is another installment of my JULY 1963 series. That’ll be followed by comics reviews or monster movie reviews or maybe even some personal/political stuff. I try not to plan these bloggy things out too far in advance.

Coming up on Friday will be my next online Vast Accumulation of Stuff sale, filled with wondrous items on which you can spend hard-earned money. All proceeds from the sale benefit me and mine.

My first physical garage sale will be on Friday and Saturday, June 27 and 28, from nine a.m. to noon at 840 Damon Drive in the lovely city of Medina, Ohio. I will be adding new stuff to the sale right up to the moment my garage door opens on Friday morning. Look for an update or two between now and then.

In the words of a great man who was a nice part of my life even if I never got the opportunity to tell him so...keep your feet on the ground and keep reaching for the stars. We miss you, Casey Kasem. If there’s a rock-and-roll heaven, and there should be, I’m certain you’re spinning the Top 40 songs of that swinging place.