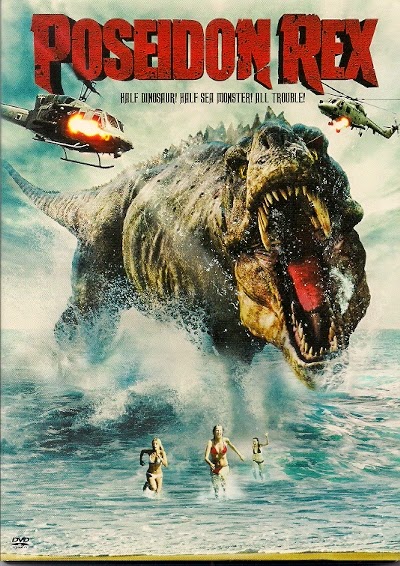 It’s Dinosaur Day at the bloggy thing. We’ll start with a pair of recent reptilian releases...

Poseidon Rex [2013] isn’t a completely awful movie, but it’s not a particularly good one either. Here’s the IMDB summary:

A small, secluded island off the coast of Belize suddenly finds itself terrorized by a deadly predator from the planet's distant past when deep sea divers accidentally awaken an ancient evil.

Directed by Mark L. Lester, who has helmed a lot of entertaining B-movies, P-Rex doesn’t have any element I haven’t seen in some other B-movie. The dinosaur reminds me of Dinoshark with more mobility on land. The search for treasure at the behest of an evil gangster - in this case, a drug lord - reminds me of Shark Zone. There wasn’t anything new about the dinosaur attacks. When I watched the movie the first time, it felt like I was seeing it for the second time.

Writer Rafael Jordan also has solid B-movie credentials, including crafting the story for the awesome Ragin’ Cajun Redneck Gators and the screenplay for the almost-as-much-fun Copperhead. But he comes up empty with this one.

None of the characters are likeable with the possible exception of a boat captain played by Berne Velasquez. He’s black, so you know what his life expediency is in a movie like this.

Brian Krause is a larcenous diver. Anne McDaniels is a feisty sexy scientist. Steven Helmkamp is a handsome young jerk. Candice Nunes is his needy girlfriend. According to IMDB, Corin Nemac, one of my favorite B-movie actors, “was originally cast in the lead, but after a few days of filming was critically injured when a Belizean Coast Guard boat ran into a semi-submerged barge while transporting the crew to set. His leg was shattered and he required multiple blood transfusions to save his life.”

Nemac could have brought something better to the lead role, but I don’t know if he could have saved the movie. I do know this movie wasn’t worth the injuries he suffered.

I’d rate Poseidon Rex as a one-and-done movie...and that’s only if you can watch it for free. I definitely don’t recommend buying it or going the least bit out of your way to watch it. Keep walking. Nothing to see here.

The Dinosaur Experiment [2013] is also known as Raptor Ranch. The alliterative title is much more in keeping with the nature of this B-movie and is what it’s listed under at IMDB. Here’s the summary of the film from that website:

Fossil Ridge, once believed to be a cattle ranch is discovered to be a breeding ground for vicious prehistoric velociraptors. When the bloodthirsty dinosaurs escape, the townspeople must fight to survive the deadly raptors.

I was disappointed with The Dinosaur Experiment when I first viewed it, but, over time, I’ve begun to think of it more kindly.  Almost no one involved in the movie, from the director and writers to the cast, has much experience.  For many, it’s their only IMDB credit. For a first effort, it’s not that bad.

Jana Mashonee plays waitress-by-necessity and wanna-be singer Abbi Whitecloud. She’s the best thing in the movie as she battles dinos and tries to keep other cast members alive. Fernando Lamas plays an FBI agent whose role in the movie is utterly inconsequential. I’m wondering if the director used his birthday money to buy Lamas for a day of shooting.  If he’d waited a few more birthdays, maybe he could have gotten Carmen Electra or Tiffany.

The acting is so-so. The CGI and rubber effects are mediocre. The setting for the climatic battle between Abbi and the T-Rex is kind of sort of cool. The after-the-climatic-battle conclusion comes out of nowhere...

Abby, who cleans up right nice, is singing on the stage of a rural nightclub. She has back-up singers and dancers. A surviving raptor shows up for not-so-happy hour. Movie ends. You gotta give director and co-writer Dan Gordon points for trying so hard.

The Dinosaur Experiment/Raptor Ranch is worth seeing once, but only if you can get it as an inexpensive rental.  It’s not worth buying unless you’re related to someone who was in it.

Raptor [2001] is the unofficial Carnosaur 4 and it’s more fun than such a lousy movie has any right to be. Directed by Jim Wynorski  under the pseudonym Jay Andrews, it doesn’t appear to have even one new dinosaur scene. Every dino scene in the film is from Carnosaur, Carnosaur 2 or Carnosaur 3: Primal Species. Though the new scenes don’t always match the old footage around them, there is a perverse genius to how Wynorski managed this.

Here’s the IMDB summary of the movie:

When a series of unexplained vicious animal attacks strikes his community, Sheriff Jim Tanner and his assistant Barbara trace them back to a Dr. Hyde, a former military researcher whose government funding for a dinosaur cloning project was cut. When the Pentagon discovers Hyde obtained foreign backing to continue his experiments, they send in a strike team to save Tanner and Barbara and stop Hyde.

IMDB gets one thing wrong, Barbara [Melissa Brasselle] isn’t really the sheriff’s assistant. She’s a former lover and an animal control expert whose clothes generally consist of tight shirts designed to calm wild animals by drawing their attention to her breasts. All I can say is...mission accomplished!

The wonderful Eric Roberts plays the sheriff and he seems to “get” these B-movies better than most. He’s good enough to overplay his role just enough to fit in with the movie.  Unfortunately, the same can not be said for a favorite actor of mine.

Corben Bernstein plays Doc Hyde. He wears this silly beret as if he were trying to keep from being recognized. Throughout the movie, he is just one “bra-ha-ha” away from comedic gold. He seems relieved  when a character from an earlier Carnosaur film who stands in for his character in this one is eaten.

You should see Raptor. Don’t pay good money for it, but, if you can rent it or buy for a couple of bucks, go for it.

The Eden Formula [2006], a low budget made-for-TV film written and directed by John Carl Buechler for the Syfy Channel, is also known as Tyrannosaurus Wrecks and unofficially as Carnosaur 5. However, it doesn’t use a whole lot of material recognizable as coming from the earlier Carnosaur movies.  Instead, its big-ass Tyrannosaurus  is mostly played by a goofy-looking puppet. Convincing, it ain’t.

In the industrial district of downtown Los Angeles, Dr. Harrison Parker (Jeff Fahey) has developed the Eden Formula. This new, revolutionary, cutting-edge technology can synthetically reproduce virtually any organism. And it does!

Sidebar. Wikipedia’s summary of the film is filled with errors that include identifying villain Tony Todd as a police officer who helps Fahey battle the Tyrannosaurus.

Jeff Fahey is another fun actor who was made for movies like this. He pulls off being a tough-as-nails former marine and a genius science guy. Dee Wallace plays a corporate climber who ends up caught in a deadly situation when heavily-armed and murderous spies break into the Los Angeles lab for the Eden Formula. No one chews the scenery more effectively than Wallace. She clearly has so much fun being in these movies that it’s infectious. On the down side, Tony Todd is terrible as a disgraced ex-soldier with a grudge against Fahey’s character.

Despite its low budget, The Eden Formula is fun to watch.  It does drag in a few places, but it’s got some good supporting players and a few surprises. I don’t know that I’ll watch it again, but I don’t regret buying it. It’s definitely worth renting and, if you can get it at  a good price, buying it.

I hope you enjoyed these two days of monster movies. Come back on the morrow for another “Rawhide Kid Wednesday.”

Posted by Tony Isabella at 6:24 AM