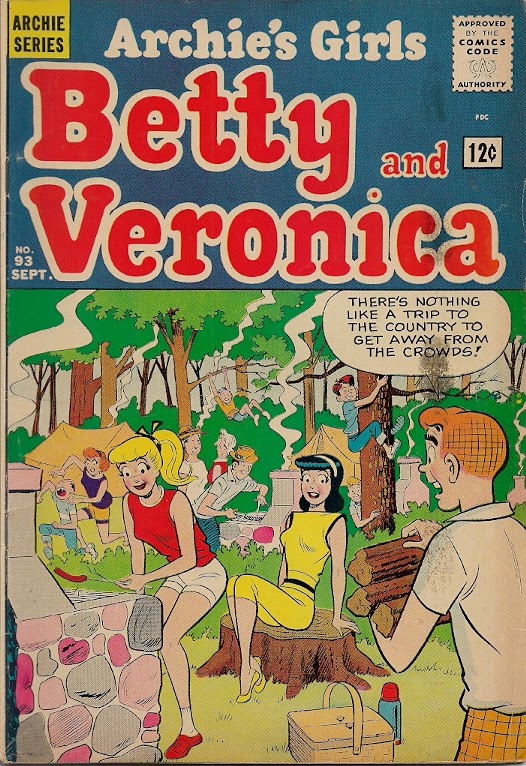 Archie’s Girls Betty and Veronica ran from 347 issues from March 1950 to April 1987 before changing its title to Betty and Veronica, starting over with a new #1 and continuing under that title to this day. Between the two titles, that’s over 600 issues, not counting annuals and specials and one-shots and digests and...let’s face it, the girls have put their time in and they still look as beautiful as they did from the start.

The cover of Archie’s Girls Betty and Veronica #93 [September 1963] is by Bob White. Check out all the action in the background. White created, wrote and drew Cosmo the Merry Martian in the 1950s, but he drew for most of the Archie titles. He drew many action/comedy stories starring the Riverdale kids as super-heroes or super-spies. In 1967, he even wrote stories for the Black Hood, the Shield and the Web in Mighty Comics Presents.

The inside front cover of the issue has Dean Studios come-ons for miniature dogs, cameras, radios and monkeys. We’ve discussed these in previous JULY 1963 entries.

“Follow the Girls” (6 pages) is the first of four B&V tales in the issue. Written by Frank Doyle with art by Dan DeCarlo (pencils) and Rudy Lapick (inks). The girls go to a secluded island to get some privacy. Archie and Reggie secretly follow them. The girls have a great day communing with nature. The boys run afoul of rockslides and wild goats. At the end of the day, the girls realize that the only thing which would have made their island visit better would’ve been if the boys had been there. The girls were sure the boys were going to follow them. As the girls head back to the mainland, the boys are lost and trying to find their way out of the woods. Given who the title stars are, it shouldn’t surprise anyone which sex is the most likely to come out on top at the end of a story. Stop that snickering. That’s not what I meant.

The story is followed by a full-page advertisement for Columbia Bicycles:

Thirteen dazzling racy Lightweights with all the most wanted speed-shifts and features. Built the Columbia way for easy peddling and trouble-free enjoyment. Boys’ and girls’ models in 26" and 24" wheel sizes.

There was a coupon at the bottom of the page so that readers could send away for a free color folder of the bikes.

“What Every Young Girl Should Know” is a single-page gag strip by DeCarlo, Lapick and an unknown writer. The punch line is insulting to girls, but I’ll let you see that for yourself in an addendum to today’s bloggy thing.

“Pain in the Rain” is another single-page gag strip. It’s written by George Gladir with art by DeCarlo and Lapick. Betty is envious of all Veronica’s pretty raincoats. Veronica is miserable...because it hasn’t rained once all spring!

The next page has two half-page ads for war games: Convoy of Terror and Task Force. I’ve written about them previously.

“Chance Encounter” (6 pages) is by Doyle, DeCarlo and Lapick.  When Betty meets handsome new boy Johnny Jordan, Veronica wants her to introduce them. Betty is no fool and foils Ronnie’s wacky attempts to meet Johnny. Ronnie is relentless and this makes for a hilarious ending to the tale. I’m going to post the final page of this story as an addendum.

A full-page house ad for Betty and Veronica Summer Fun #23 follows the story. Readers can have an issue mailed to them for a quarter, 35 cents if they live in Canada.

“Ting-a-Ling” (5 pages) is a Doyle/DeCarlo/Lapick story wherein Mr. Lodge does his usual slow burn every time Ronnie and her dripping-wet friends come into his office from the swimming pool to use the phone. It’s a battle Lodge can’t win, so he has a phone installed in the pool.

Following this tale, we get half-page ads for U.S. Royal Bike Tires and Popsicle; a single-page prose article on Ann-Margret (described in the title as a “Beautiful Teen Bombshell”); a Li’l Jinx gag page by Joe Edwards; and half-page ads for “Amazing Sea Shrimp” and “100 Toy Soldiers.”

“Direct Line” (5 pages) is the final story of the issue and, like the other main stories, it’s by Doyle, DeCarlo and Lapick. A cute young woman asks Betty and Veronica for directions to Pop’s Choklit Shoppe. They send her on a wild-goose chase because they don’t want her to meet Archie. Guess who ends up giving the girl the correct directions?

When “Archie’s Girls” overhear him telling the new girl how jealous they can be, they plot revenge. You can see how that works out in yet another addendum to today’s bloggy thing.

The remaining pages of the issue are ads we’ve seen before, all of them full-page: Daisy B-B guns, Junior Sales Club of America on the inside back cover, and the Bendix automatic bicycle brake content for a trip to Disneyland.

Thanks for visiting the bloggy thing so often. I appreciate it and I’ll do my best to keep you entertained and informed.