I AM GOING TO INDIANA 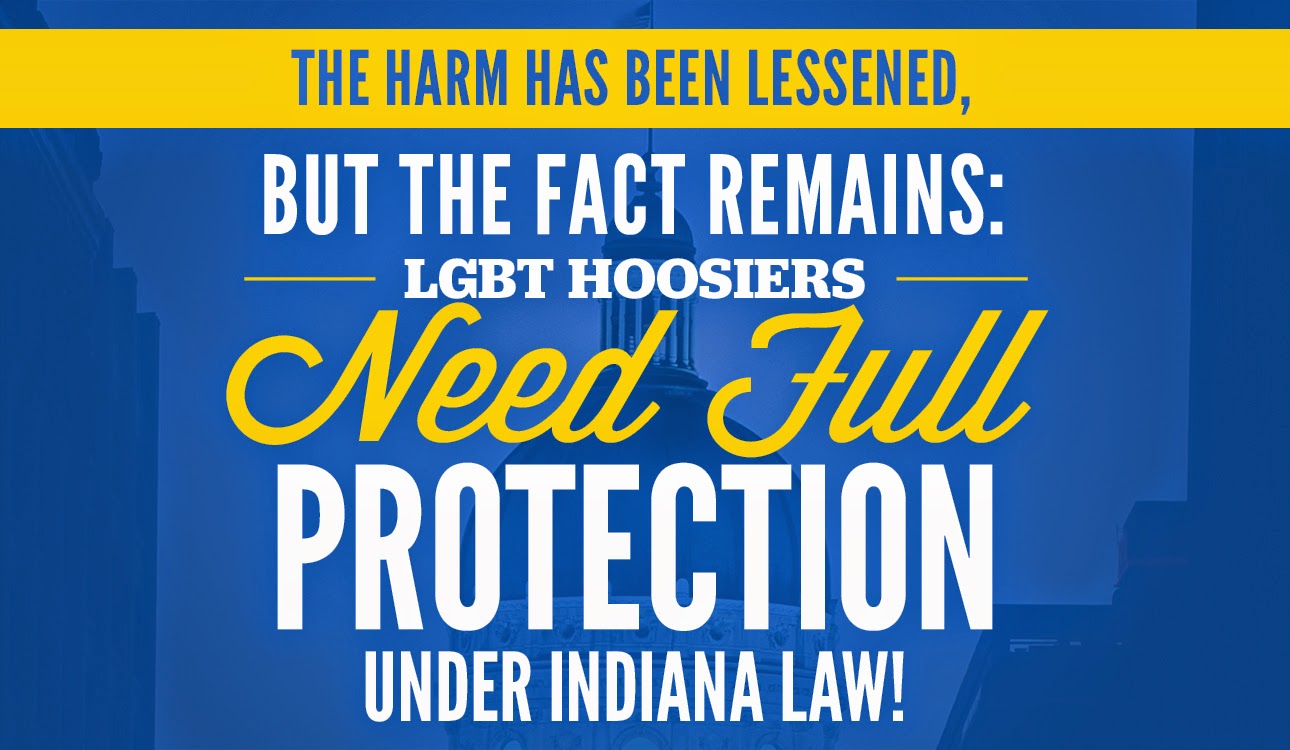 I’ll be a guest of Indy Pop Con, Friday through Sunday, June 26-28, at the Indiana Convention Center in Indianapolis. Though some of my readers may be disappointed by my reversing my earlier decision to stay away from Indiana, no one can accuse me of burying the lead of today’s bloggy thing.

I’m going to Indy Pop Con because I believe I can do more to fight Indiana Governor Mike Pence and his fellow bigots, who are mostly Republicans, by traveling to the state. If I were to stay at home, I think my impact would be minimal and quickly forgotten. If I go, I can do more than complain long distance.

Before I get into the reasons for my decision, let me recap recent events and answer a few questions.

Pence and his thugs, who control Indiana, passed a bill that would have allowed discrimination against LGBT citizens in the bogus name of religious freedom. He made the ridiculous claim that was not the bill’s intent, but he was lying. The Religious Freedom Restoration Act was promoted and virtually written by the anti-gay groups who have always been Pence’s allies and supporters. When he signed the bill, he was flanked by representatives of those groups, including Micah Clark of American Family Association, an organization on the Southern Poverty Law Center’s list of hate groups. To sum up: the bill was always meant to allow so-called Christians to discriminate in the bogus name of “religious freedom.”

Republicans, including most of the clown crowd who are thought to be seeking to be the party’s nominee for the Presidency, were quick to sign on to Pence’s discriminatory law.  Let’s hope that support comes back to haunt them.

The state of Indians immediately found itself in trouble. A number of major companies and organizations either pulled events from the state or threatened to do so. Calls for boycotting the state were being heard in increasing numbers. Heck, basketball legend Charles Barkley, who once fought Godzilla, even called for the Final Four games to be pulled from the state.

In no uncertain terms, Pence said there was nothing wrong with the new law and it would not be changed. He and his statehouse buddies caved within days. The new law was altered to be more in line with a federal religious freedom law. The insufficient change to the law was not even remotely one of the several reasons I changed my mind about going to Indiana. It remains an awful and discriminatory law. It’s not as bad as it was, but, like every one of these state and federal religious freedom laws, it needs to be dumped and replaced with laws that do not provide cover for bigotry in the name of so-called religion. That’s a topic for another day, perhaps as part of my upcoming “Tony Isabella for President” series of bloggy things. Yes, I am looking for a fight.

One of my Facebook friends pointed out that over thirty states have heightened religious freedom “protections.” A would-be poster to my blog sent me this comment:

“Hey, I've got an idea! Instead of just protesting one state, why don't you protest the entire country! The Indiana law is part of the federal law signed by Bill Clinton in 1993. Several states have had to adapt the law on a state level because of how the constitutions of those states work. ie: This law has been in effect in all 50 states since 1993. Why only protest one state when it's the federal government behind it?”

That post is typical of the fact-challenged comments I receive from right-wingers. The Indiana bill went further than the federal one. The federal bill was supported by some Democrats over two decades ago. I doubt many of those same Democrats support the bill in these more enlightened times and strongly suspect most Democrats of 2015  would not support it today. The argument is another feeble attempt to pretend there is no difference between the two parties. It’s not enough of a difference to suit me, but it’s there for those of us who care more about truth than ideology.

The question of why protest in Indiana is a legitimate one, albeit one easily answered. Because you have to start somewhere. Indiana  made its move at the right time to be that starting point for me.

Almost all of the comments I received were supportive of whatever decision I made. Some of my readers and Facebook friends gave me a lot to think about. I was pleased that only one clearly homophobic reader - and from another country at that - posted to this bloggy thing with his tired “you’re intolerant because you don’t respect my intolerance” crap. Excuse me as I pause a moment to roll my eyes at his hate-fueled idiocy.

When I told Indy Pop Con I could not accept the convention’s kind invitation to be one of its guests, the promoters asked me just as kindly to reconsider. But, before I had even told them I would not be attending, they had added this to their website:

As proud citizens of this city and state, we’re saddened that this bill has cast such a negative light on Hoosiers.  The perception created by this bill does not represent who we are or what we stand for. Our fans and attendees are as diverse as they come, and we want them to feel comfortable in our city.  We are Hoosiers, some of us born and raised, and we know that our friends, family, and our neighbors are some of the warmest and most welcoming individuals in the country, even if the new legislation threatens to paint us otherwise.

As a show born and bred here in Indiana, we’re going to continue to fight against these negative perceptions and continue to offer a warm and inclusive environment for all of our fans, guests, and attendees.  We do not wish to leave, we wish to affect change.  In response to the RFRA, we have updated our exhibitor terms and agreements to make it clear that we will not do business with, accept money from, or receive sponsorship from any business entity that chooses to discriminate against people based on their ethnicity, sexual orientation, gender identity, abilities, religion, or socio-economic background. We will not tolerate discrimination in any form and will continue to promote a welcoming atmosphere within our walls and within our city.

As I wrote in my bloggy thing for March 30:

That’s a powerful and powerfully stated response to the “Religious Freedom Restoration Act.” It’s the kind of message which makes me think I should reconsider my decision, though that’s something I’m not going to do until I hear back from my bloggy thing readers and my other friends online.

Neither Governor Pence or the GOP legislators would be hurt by my staying home. Only the convention promoters and the fans who would want to see me at the event would be harmed. I would be penalizing those who were not bigots.

Not all Hoosiers are bigots. In fact, I’d wager that the majority of them were just as appalled by the actions of Pence and his goons as me. The speed and intensity with which many Indiana businesses embraced the “THIS BUSINESS SERVES EVERYONE” campaign and stickers developed by Openforservice.org is evidence that most Hoosiers are good people. As much as humanly possible, I will only spend money with retailers who display that sticker.

Indiana, like most states under Republican control, is hurting big time. Its citizens need to fight back against polices that hurt the average citizens to benefit the wealthy and the powerful. Shunning Indians - or boycotting the state - will hurt good people more than Pence and his supporters. I want to do what little I can do to try to empower Hoosiers to throw those bums out of office.

Ultimately, I decided I could do some good if I did attend Indy Pop Con. I told the promoters that I wanted to share my table with some local LGBT group or progressive organization which would inform the fans of the issues and real freedoms at stake. I would ask fans who wanted me to sign their Isabella-written items to make a donation to the fight against discrimination.

Indy Pop Con was completely cool with what I wanted to do and was already working on something similar. It’s too early for me to talk about these in-the-works ideas, but they will satisfy my desire to make my Indy Pop Con appearance a positive force, however small, in these matters.

So...I am going to Indy Pop Con. I will have more details about my appearance in the weeks to come. I hope those of you who said they wanted to see me there do come to the event. I hope those who felt I should stay home will understand I did not come to the decision to attend the convention any more easily than I came to my original decision not to attend it.

Thanks for your advice and support. I’ll be back here tomorrow with a new “Rawhide Kid Wednesday” feature. See you then.

Posted by Tony Isabella at 6:55 AM