THE LIBRARY HAS A MESSAGE FOR YOU 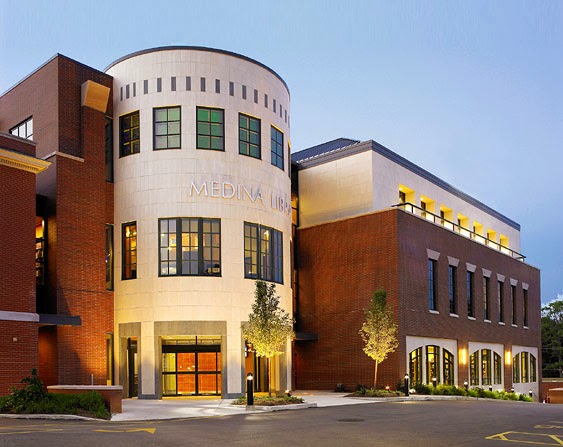 Two of three times a week, usually in the early evening, the phone rings at Casa Isabella. Sainted Wife Barb picks it up, looks at the number on the caller ID and says, “It’s your girlfriend.”

My “girlfriend” is a recording informing me items I have requested are now available at my local Clevnet library. Clevnet is a spiffy organization of around a hundred area libraries. It has changed how I borrow books and videos from the library.

To request a book or video, I need only go to my library’s website and log into my account. I search for the item I want and, if any Clevnet library has it, I can request it. When it’s available, the item is sent to my local library and a recorded message is sent to my phone informing me that the item is now available.

Here is what’s in the latest stack of books and videos I’ve read or viewed and which are awaiting return to the library...

Apocalypse Pompeii is a 2014 disaster movie from The Asylum, one of my all-time favorite makers of movies. Adrian Paul plays a former  Special Ops guy now running his own security firm. He has come to Italy on business and brought his wife and daughter with them.  He goes to a meeting and they go on a tour of Pompeii. Mount Vesuvius erupts, trapping Paul’s loved ones. He steals a helicopter and goes after them with some of his old teammates.

Running a very tight 87 minutes, the film is a solid B-movie thriller. The characters are fairly well-developed and the actors do a good job with their often limited roles. The danger mounts nicely with a lot of suspense. The special effects aren’t top-notch, but they suffice for what they need to be. I don’t think I’d watch this one again, but I had fun watching it the first time.

Some fun notes: A tourist gets taken out by a boulder blasted from Vesuvius. Somehow, the boulder comes at her sideways and not from above. The same bit was used in 2013's Stonados.

Paul’s character is named Jeff Pierce, just like my creation Black Lightning. His wife is named Lynne, just one letter more than the name of BL’s ex-wife. Was one of the writers a comic-book reader? I’ll probably never know.

So the Russians did a Black Lightning movie in which the title "hero" was a flying super-car. Now this movie has a character named Jeff Pierce. Alas, these are the closest we’ll probably ever get to my creation starring in his own film.

Pinocchio’s Revenge was a so-so 1996 American horror movie, which, as I later learned, was a direct-to-video effort. Wikipedia offered the following:

Directed by Kevin S. Tenney, it stars New Zealand actress Rosalind Allen and Canadian actor Todd Allen who were married from 1990 to 2005. The production, structured as a direct-to-video effort, concerns a lawyer who brings home a wooden puppet that was found buried with a boy supposedly killed by his father. Her 11-year-old daughter Zoe sees the doll and takes it as her own. Soon accidents start happening and Jennifer struggles to find the cause as she begins to question her daughter's well being and whether or not there may be something sinister to the doll.

The best scenes were between the lawyer and a young minister, but the minister never played any role in the action, which could have improved the movie. There were a few moments of suspense and I liked the ambiguity of whether or not the puppet was alive. But, at the end of the day, even at a relatively short 96 minutes, the movie dragged. I wouldn’t watch it again and wouldn’t recommend you watch it even once.

Perhaps because of Robert Frost’s birthday, I got the urge to read his work again. Since any Frost books I might still own are boxed away in the Fortresses of Storage, I requested the first book that turned up in my Clevnet book.

Stopping by Woods on a Snowy Evening is an illustrated version of just the one poem. The Susan Jeffers illustrations for what seems to be a children’s book are pleasant enough, but stretching out the poem over a couple dozen pages made the reading of it less than it should have been. I’ll be more careful with my next Frost request.

I’m reading Ted Naifeh’s delightful Courtney Crumrin series through Clevnet. The title heroine is a young girl with witless parents and few friends at school. Her family moves in with her Uncle Aloysius, a powerful warlock. It turns out Courtney can do magic, which makes for some interesting adventures...as in may you be cursed to live in interesting times.

Courtney Crumrin and the Coven of Mystics is the second volume in the series. Courtney learns alarming and difficult truths about how power, political and otherwise, works and tries to seek out a bit of justice for some friends in need. Naifeh does a good job mixing the action, character play, humor and scary. I might end up buying these books for my own home library.

Rat Queens by writer Kurtis J. Wiebe with art by Roc Upchurch was a comic I kept reading good things about. When it was nominated for a “Best New Series” Eisner Award, I thought I should check it out. When it won a 2015 GLAAD Media Award, I knew I had to check it out. I requested Rat Queens, Volume 1: Sass and Sorcery from Clevnet and read it this week.

The Rat Queens are four adventurers in a fantasy world awash with intrigues, mercenaries and supernatural creatures. They are bawdy and boisterous and intensely loyal to one another. I liked the book a lot, though I did lose track of some of the finer points of the backgrounds and relationships of the characters. I chalk that up to the volume being a real page-turner and not to any diminishing of my aging faculties. Since I’m going to buy a copy for myself, I’ll be reading it a second time. Recommended.

The Love Bunglers is the latest graphic novel by Jaime Hernandez. It’s being hailed as a masterpiece, but not by me. Truth is, I’ve been finding Hernandez’s work less than satisfying for a few years now. His works always have some good writing and art, but he seems to be telling his stories in a kind of shorthand that relies on the reader remembering countless details of past works. It might well be rewarding to binge-read the entire Hernandez library, but that probably isn’t in my future. As Don Thompson used to say, “If you like this sort of thing, you’ll like this.” That’s my position on this graphic novel.

The best and most interesting item in this batch of library stuff was Going Clear: Scientology, Hollywood, & the Prison of Belief by Lawrence Wright. It’s a powerful examination of L. Ron Hubbard and  the “church” he founded. It’s as scary as a Stephan King novel and maybe scarier because it’s a true story of human monsters who are operating freely even as we speak. This book deserves more than a few paragraphs. I will be writing about it at length in tomorrow’s bloggy thing. See you then.