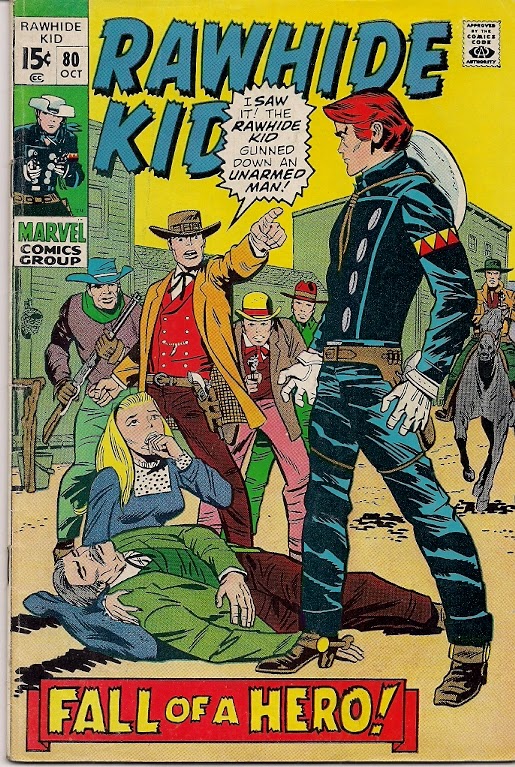 The Rawhide Kid is my favorite western comics character and one of my favorite comics characters period.  Something about the short of stature (but big on courage and fighting skills) Johnny Clay spoke to the short of stature (but big on comics-reading skills) teenage Tony Isabella.  After rereading the Kid’s earliest adventures when Marvel Comics reprinted them in a pair of Marvel Masterworks and an Essential Rawhide Kid volume, I wanted to reacquire every Rawhide Kid comic, reread them and write about them in this bloggy thing of mine. This is the 65th installment in that series.

The Rawhide Kid #80 [October 1970] is a key issue, but not for any good reason. Although it has a new cover pencilled by Larry Lieber and possibly inked by Herb Trimpe, the issue reprints stories from issue #56 [February 1967]. From this point on, the title will often feature reprints, shorter-than-usual Lieber stories and fill-ins by other creators. More often than not, the back-up stories will come from various western comics of the late 1950s. The Rawhide Kid #115  [September 1973] will be the last issue to feature any new interior material. This issue is the beginning of the still somewhat distant end.

“Fall of a Hero” (17 pages) is written and pencilled by Lieber with inks by Vince Colletta. “Reno’s Revenge” - the back-up tale - is by Denny O’Neil with art by Al Ulmer. I wrote about these stories in my bloggy thing for May 8, 2013. Surprisingly, neither of the two stories was identified as a reprint.

“The Mighty Marvel Checklist” takes up less than half a page this issue. In very small type, it heralds Fantastic Four #103, drawn by John Romita and featuring Magneto and the Sub-Mariner and another 36 titles, 37 titles if you count the "just kidding" kidding listing of The Ladies Home Journal #1893.

Red Wolf makes his debut in Avengers #80. Neal Adams gets a shout-out for drawing Thor #180. Sub-Mariner #30 has a guest appearance by Captain Marvel. Spoof #1 is launched with parodies of Marooned, Dark Shadows and the Mod Squad.

Most titles are only mentioned by name and issue number. Fright #1 is on sale this month, one of several horror/monster titles on the list. There are also western titles, Millie the Model titles, two romance titles and Li’l Kids #2. Now free to publish as many comic books as it wanted, Marvel was again venturing into genres that had been successful for the company in the past. Most reprinted older, sometimes updated stories, but some had new material. Eventually, the super-heroes would dominate the company’s output even more than they had dominated it in recent years.

The rest of the page was a “Super Poster Offer” from Marvelmania, the ill-fated fan club which Marvel outsourced to a disreputable entrepreneur. You could get four posters for $1.50 plus half-a-buck postage. The posters were said to be a giant three foot high and in full-color. There was Spider-Man by Romita, Doctor Doom by Kirby, Hulk by Trimpe and Captain America by Steranko. Since I never saw these “in the flesh,” I’d be interested in hearing from any of my readers who did buy them.

There are fewer comics-related ads in this issue, but one of them is a full-page pitch for Monogram’s model kid of Peanuts character Snoopy in his Sopwith Camel. The ad is designed like a comics page and the kit includes a battery-powered propeller “you flip to start like a real plane.”

The issue’s smaller advertisers include back-issue sellers Howard Rogofsky, Grand Book Inc., Passaic Book Center, Comic Sales Co. and Richard Alf. There’s also an ad for Futura, which bills itself as a high-quality fanzines with lots of art and information on comic books of the past. One dollar would bring you a sample copy of the fanzine from publisher D.G. Cassidy.

Also noted...Art Directors Course offered to teach fans to learn  to draw comics at home from experts. A quarter would get you full information from the Manhasset, New York-based company. Did any of my bloggy thing readers ever answer this ad? If you did, I’d love to hear all about your experience with the course.

Today’s bloggy thing doesn’t change my resolve to write about every issue of Rawhide Kid from when Stan Lee and Jack Kirby relaunched the title with a new Rawhide Kid. When an issue features a reprint of a story or stories I’ve already written about, I will include a link to the appropriate bloggy thing. But I will also write about any new-to-the-title reprints and editorial stuff (letters pages, Marvel Bullpen pages and comics ads) found in those issues. Since Rawhide Kid ran until issue #151 [May 1979], we still have a lot of hard-riding ahead of us.

Posted by Tony Isabella at 6:07 AM