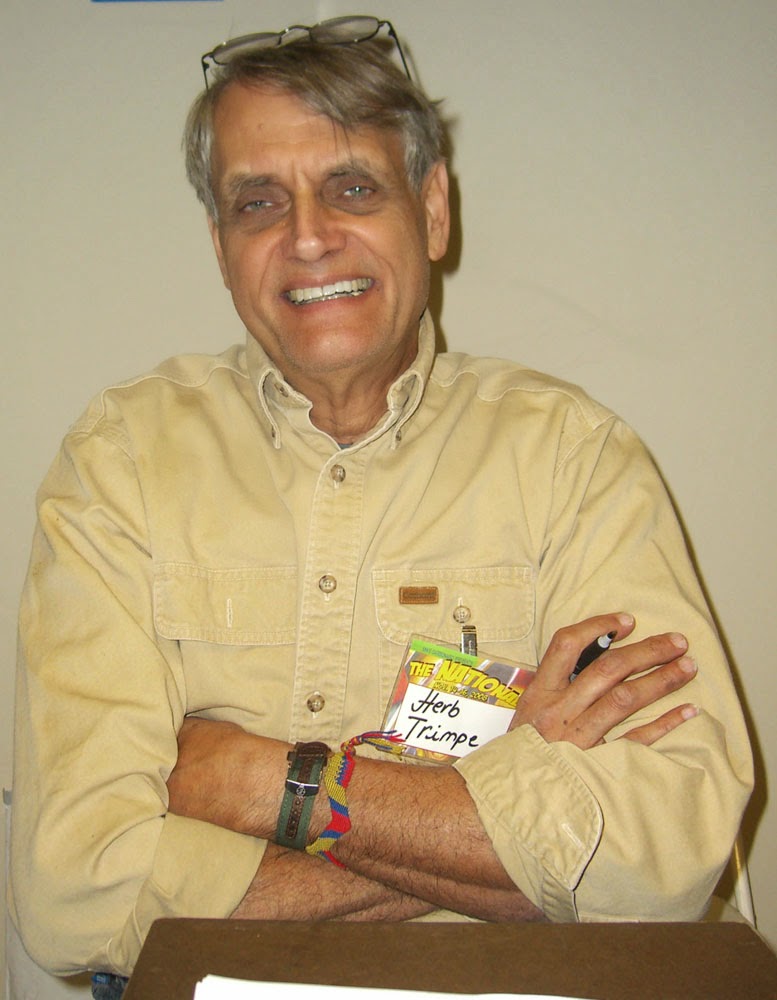 Herb Trimpe passed away on Monday night. He was a great man and a great artist and most remembrances like this will preface his name with a well-deserved “legendary.” I’m beginning to hate that word a lot because, when I see it online, it too often means that I have lost a friend and the comics industry has lost another incredible talent. Both are true in this case.

I first met Herb when I went to work for Marvel Comics in the fall of 1972. I knew his work from his long run on Incredible Hulk and other things, including the one-shot Phantom Eagle story he did in Marvel Super-Heroes #16 [September, 1968]. I loved his art because it had a Jack Kirby power without overshadowing Herb’s own terrific style. I was a Trimpe fan before I met Herb.

After meeting Herb, I knew one thing and hoped another. I knew he was a good man, as friendly to the new kid as if we had known each other for years. I hoped everyone I met in the comics industry would be as nice as Herb. Many, especially in the Marvel offices, were as nice as Herb. No one was nicer.

My aging memory fails me when I try to recall what in-house stuff I might have done with Herb. I did script two issues of Incredible Hulk which he pencilled and, pun intended, I marveled at how easy it was to write to his art even when I didn’t have an actual written plot to guide me. Herb’s storytelling chops and the few words he’d written next to each panel were all I needed.

Herb almost drew one of my own plots. Remember how I wrote I liked the Phantom Eagle? I plotted an issue of Ghost Rider in which that  World War I character returned as a vengeful spirit. Sadly, one of the scheduling problems that were a nigh-daily occurrence at Marvel in those days prevented Herb’s drawing the issue.

The last time I worked with Herb was probably when I was the writer and editor of the 1976 Marvel Bicentennial Calendar. I asked Herb to draw the Hulk at Valley Forge. That he didn’t look at me like I was crazy, unlike just about every other artist who worked on the calendar, speaks to just how nice a guy Herb was.

Comic-book friendships are generally long-distance friendships. I moved back to Ohio and didn’t visit the Marvel offices on any kind of regular basis. I would see Herb at the occasional convention and enjoyed talking with him. He was always as friendly at those shows as he had been in the Marvel offices.

The comics industry isn’t often kind to creators whose styles fall of favor or who simply, regardless of their styles or talent, just get older. When Herb stopped getting regular work from Marvel, he went into teaching. He did commissions for his fans, of which there were many, and he drew the occasional cover or interior story for several publishers. He was a guest at conventions and, no surprise to anyone who knew him, he was a wonderful guest.

Herb was ordained a deacon by the Episcopal Diocese of New York. After the tragedies of 9/11, he spent eight months as a chaplain at Ground Zero. He wrote about his experiences in The Power of Angels: Reflections From A Ground Zero Chaplain [Big Apple Vision; 2004]. When I reviewed the book in 2006, I wrote:

...is an amazing book on every level. It's a record of faith and doubt and miracles and humanity at its best. I got teary several times while reading the book and was never sure if they were tears of sorrow or of joy for the good work Herb and others like him were doing at the site of the worst terrorist attack on American soil. I won't "rate" this thoughtful book, but I will strongly recommend it to one and all.

The Power of Angels was a direct inspiration for the backgrounds of  key characters in the six-issue Grim Ghost series I wrote back in 2010. The book - and Herb - have never been far from my thoughts. If you haven’t read The Power of Angels, I urge you to seek it out on the secondary market.

When I think of Herb, I also think of my late friend Gary Lunder. Gary and I went to St. Edward High School. He was one of the very few students there who also loved comic books. He also introduced me to Doc Savage, for which I am forever grateful.

When Gary and I reconnected about a decade ago, he’d been diagnosed with terminal cancer. But I got Gary and his family to one of Roger Price’s Mid-Ohio-Cons where he got to meet and spend a few moments with his favorite comics artist...Herb Trimpe.

Herb was, well, he was Herb. He was friendly and generous and kind. For those few moments, Gary could forget about what was coming and just bask in the presence of a childhood hero.

Herb was Herb. That’s why I’ll always remember him with gratitude and love. As much as I miss him today and will miss him for all the tomorrows to come, I am so glad I got to know him. His great comics work was a reflection of the great man he was.

Posted by Tony Isabella at 7:38 AM