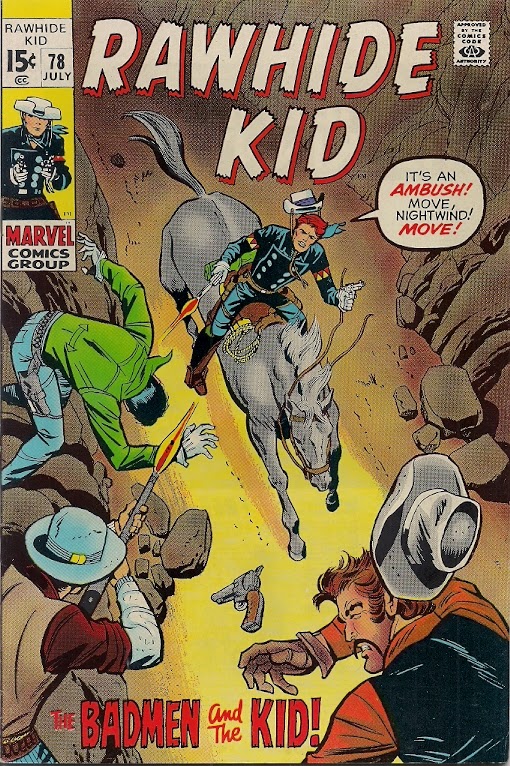 The Rawhide Kid is my favorite western comics character and one of my favorite comics characters period.  Something about the short of stature (but big on courage and fighting skills) Johnny Clay spoke to the short of stature (but big on comics-reading skills) teenage Tony Isabella.  After rereading the Kid’s earliest adventures when Marvel Comics reprinted them in a pair of Marvel Masterworks and an Essential Rawhide Kid volume, I wanted to reacquire every Rawhide Kid comic, reread them and write about them in this bloggy thing of mine. This is the 63rd installment of that series.

The Larry Lieber cover on The Rawhide Kid #78 [July 1970[ is a cool downshot of our hero being ambushed by a trio of outlaws. The Grand Comics Database tentatively credits the inking to Lieber and Herb Trimpe. I can see both in the cover, but art identification isn’t really my strong point.

“The Badman and the Kid” (20 pages, but two of those are only half-pages) is another strong Lieber story. However, it’s unfortunately marred by the use of a bit I know I’ve seen at least a dozen times in this title and other Marvel westerns. You’ll recognize it when I get to it.

The story opens with gunfighter Matt Tanner riding into this small town. Everybody freaks. One man rushes into the ten-cents bath and plans to stay there until Tanner leaves. Coincidentally enough, the Rawhide Kid is also enjoying a hot bath.

The Kid and the new arrival chat with Rawhide, who knows of Tanner, opining the gunslinger might just be passing thru town. The other man scoffs at this:

No chance of it! Varmints like Tanner never just “pass thru”? But then, what’s a young clean-cut lookin’ fella like yourself know about such matters!

The older man tells the Kid to be careful. The Kid gets dressed and the man recognizes his buttons and twin colts. The man realizes he has been trash-talking gunslicks to the Rawhide Kid and faints in his tub. It’s a funny scene.

Two amateurs try to call out Tanner in the town saloon, but run for the hills when they realize Tanner already had them covered with an under-the-table gun. Outside the tavern, Billy Dolan of the Dolan Gang figures to be the man who outguns Matt Tanner.

Dolan is planning to cheat. He has another gang member stationed on the roof. Rawhide spots the second outlaw. As Tanner shoots Billy, the Kid shoots the gun out of the other outlaw’s hand. Billy isn’t so lucky. He’s dead.

Rawhide and Tanner let the second outlaw go. In gratitude for his life, the outlaw tells him Billy had brothers who won’t take kindly to their kin’s death. He recommends Tanner ride hard and fast out of the territory.  “Your concern touches me,“ says Tanner, “but I have my own unalterable plans!”

Tanner is riding south and suggests the Kid join him.  However, on the trail, he realizes the Dolan Gang will be looking for him and suggests Rawhide steer clear. The Kid says he already bought into this fracus when he fired at the bushwhacker. It’s his fight, too, and he’s pretty sure Tanner will be needing his guns.

Tanner requests another favor from Rawhide. His business is in the town that lies ahead of him. He doesn’t want that business soiled by gunplay. The Kid tells Tanner to hide on. He will hold off the Dolan Gang as long as he can.

Tanner rides into town. People freak. A couple of kids playing with wooden guns are impressed by him. In a general store, owners John and Bess are worried. Tanner is here to see his son.

Bess and Matt had been married, until Tanner turned outlaw and did a long stint in prison. Bess remarried. I wonder if divorce was a common thing in the Old West.

Bess and John have been giving young Tommy a clean, decent life and they don’t want that spoiled by the lad learning he’s the son of an outlaw.

Tanner says he won’t tell Tommy anything. He just wants to see him once more before he dies. Bess understands, pointing out a boy with sandy hair playing shoot-out:

I’ve tried to stop him from doing that, but it’s useless. The boys in these parts think gun fighting is exciting and glamorous! Their heroes are men like you! Men whom they try to imitate.

That’s how it begins--with toy guns! And this is how it ends--old, broke, and on the run! But it won’t happen to my son! Not if I can help it!

Tanner bullies the boys. He grabs Tommy’s gun and breaks it, saying he ain’t about to let Tommy get faster than him. John rushes out to confront Tanner. Tommy screams Tanner can’t draw on his unarmed pa. Tanner says: That’s the kind of fight I like best, boy--the one that I can’t lose!

Any regular reader of Marvel’s westerns had to know what was coming next. John stands up to Tanner and punches him out. Tanner “turns tail” and runs away. The boys are impressed and realize a gun isn’t the measure of a man.

Bess thanks Tanner for what he did. She promises to tell Tommy the truth someday, when the boy is old enough to be grateful for what his father did for him.

Meanwhile, the Dolan Gang has caught up with the Rawhide Kid. Lots of gun play ensues. The Kid handles most of the gang, but is about to be killed when Tanner shows up. The two gunfighters finish the Dolan Gang without killing them.

The Kid asks Tanner if he attend to his business:

You and me--we’ll be tangling with “Dolans” the rest of our days! But there’s a boy who’s gonna be spared that nightmare! A boy who’s  gonna grow up straight and decent! Someone who folks will respect!

When Rawhide asks if the kid carries Tanner’s name, the older man replies:

No...but he carries my future! He’s my son...and some day he’ll be part of a better world than you and I have ever known!

“The Badmen and the Kid” has never been reprinted in this country. Even with the familiar “measure of a man” bit, I think it’s worthy of being reprinted.

As has become usual, “The Mighty Marvel Checklist” shares a page with the Marvelmania International membership pitch. This month’s highlights include Fantastic Four #100, a Black Widow appearance in Amazing Spider-Man #86, Captain Marvel going up against the Hulk in Captain Marvel #21, and the return of Wally Wood for am anthology story in Tower of Shadows #6.

There is a half-page ad for Steranko’s History of the Comics, the first of the two completed volumes. There are classifieds ads from comics dealers Grand Book Inc., Comic Sales Co., Howard Rogofsky, Richard Alf, F.L. Buza, Passaic Book Center and Robert Bell. There is also an ad for Gary Groth’s Fantastic Fanzine Special.

The “Marvel Bullpen Bulletins” page has shout-outs to inkers Chic Stone, Vince Colletta and several other artists. There’s a mention of “Gal Fridays” Lovely Leslie Dixon and Mischievous Mimi Gold. I think I once met Mimi at a Detroit comics convention before I went to work for Marvel.

Jack Kirby’s visit to the offices (from California) is a plug for his new Inhumans feature in Amazing Adventures. There’s news that Marie Severin will be drawing a new superhero feature for Marvel and that Don Heck is working on a new Doctor Strange series.

“Stan’s Soapbox” talks about how long it takes to do a comic book. Half a day to plot a 20-page story with the penciler then doing 1-3 pages per day. Two days for the writer to script the story from the art. About 20 hours for the letterer to letter the issue with the inkers taking roughly the same amount of time to do what they do as the pencilers took to do what they did.

The “Ridin’ the Trail with Rawhide” letters page had letters from two future comic pros: Alan Kupperberg and Mark Verheiden. In his letter, my friend Alan expressed the opinion that the Rawhide Kid stories by Larry Lieber had more of an adult sensibility than the ones by Stan Lee and Jack Kirby. Mark, also a friend, thought issue #75 was too many familiar elements, but thought the over-all issue was quite good.

Terrence Kalkanian of Villa Park, Illinois, praised a recent issue of the title and added that he enjoyed the other Marvel westerns as well. I’m right there with him on that.

Daniel Lieberman of Cleveland Heights, Ohio found Rawhide Kid #74 to be “a great new twist on an old, old plot.” He requested Larry Lieber do a superhero yarn and brand-new stories for Ringo Kid and Kid Colt. Since Cleveland Heights is right next door to Cleveland, I’m trying to recall if I ever met Lieberman.

That’s all for this weekly installment of “Rawhide Kid Wednesday.” I’ll be back tomorrow with more stuff.

Posted by Tony Isabella at 5:43 AM