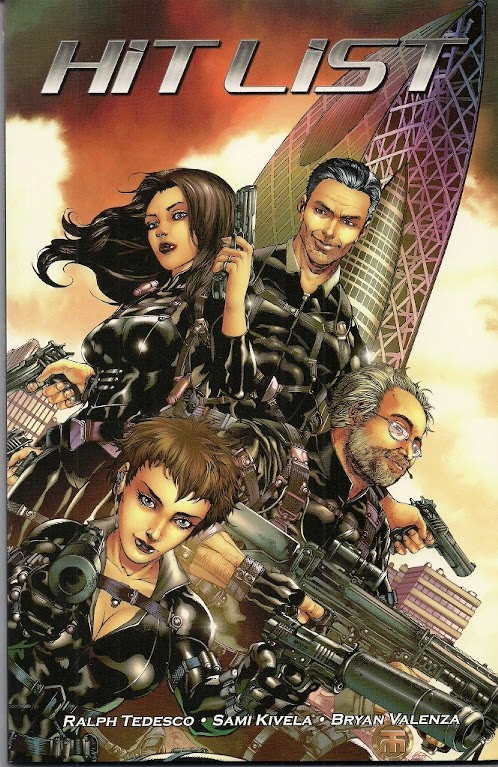 I received my first Comic Bento box earlier this month. Here’s the third of my four reviews of the GNs in that box...

Hit List by Ralph Tedesco and Sami Kivela [Zenescope; $15.99] is a sexier-than-the-norm “B” action movie in comic-book form. The back cover synopsis tells you almost everything you need to know about the graphic novel:

As a young boy, Jordan Bale’s life was drastically affected by unthinkable violence few people can relate to. Driven by that anger, Bale grew to become one of the wealthiest businessmen in the country.

Now, a group of hired killers will be brought together to carry out Bale’s intricate plan for vengeance thirty years in the making and it’s a plan that could very easily spiral out of control.

Tedesco’s story and writing are good and flow well, but they aren’t in any way special. Bale’s hired killers have the moral high ground by “virtue” of their targets being completely despicable. Kivela’s drawing and storytelling are good as is the Brian Valenza coloring. The covers and variant covers emphasize the sexy women characters. But that’s sort of Zenescope’s stock in trade, so it didn’t come as a surprise.

Other things that have crossed my mind of late...

The 2015 Eisner Awards nominations have been announced. Every year, I look at the list and wish I had the time to take a week or three off and read all the nominated works. That might happen some year in the hopefully near future, but it won’t be this year. When you read Monday’s bloggy thing with its attendant announcement of the next major Tony Isabella project, you’ll understand why reading all the Eisner-nominated works is off the 2015 table.

I’m pleased by the recognition given Ms. Marvel and its creators in this year’s nominations and, generally, by the terrific variety of the nominated works. Just looking at the comics and books on this list that I have read, voters are going to have a lot of very hard decisions to make. Which is, or course, wonderful for the art form and industry I love so much.

Good on you, comicdom.

Spencer Beck is the president of The Artists’ Choice and has been an original art sales representative for three decades. He’s a good guy, which is one of the reasons his client list is among the most impressive in the field.

Earlier this week, Beck announced his company had been hired by a group of collectors to buy high-quality comics art from the 1960s through the 1990s. His company was given a budget of $1 million to purchase this art.

The announcement was greeted by the now-familiar cries of how true fans were being priced out of the original art market and that this was horrible news for comicdom. Which is, if you’ll excuse my crude language, poppy-cock.

Beck made this public because making it public is how you get key pieces that haven’t been on the market to maybe come on the market for the first time in years and decades. He’s doing right by those new clients of his and by the potential sellers who might consider that now is a good time to let someone else enjoy the original art they’ve been enjoying.

The whole “true fan” thing has always bothered me. How much money someone has to spend on comics or related items isn’t a determining factor as to whether or not their love for comics is “true.” It’s the love that matters. You can spend a million dollars on comics or only read comics you can borrow from your public library. It’s the love that matters.

As far as pricing comics fans out of the original art market, that ship left port a good while back. Key pieces are already commanding prices of tens of thousands of dollars. In a good year, I have the means to commission a small nice piece or two. A nice Jack Kirby page has been out of my reach for more than a decade. Heck, I can’t afford to buy splash pages from stories I wrote. It’s way of things and I don’t fret about it.

The most sought-after pages are already selling for five figures. Some are selling for over $100,000. Taking that into consideration, even with a million dollars to spend, Beck’s company might only end up purchasing ten pages. That’s a minuscule fraction of the comics art market. Unclench already.

Beck’s announcement might not be thrilling news for many and maybe most collectors. It’s good news for other collectors because it may increase the value of pages they want to sell and make pages they have long desired available to them.

If fan rage were energy, it would be the perpetual motion machine of our dreams. Let’s save it for things that really matter and not for something as arguably trivial as this.

I extend my best wishes to Beck and his clients. I hope they find some great art for his efforts and their money.

We end today’s bloggy thing with the reminder that, on Free Comic Book Day, I’ll be at Heroic Adventures Comics & Pop Culture Store, 126 Gnau Ave SW, Unit A in Massillon, Ohio. I’ll be there from 11 am to 4 pm. You can get more details here.

I’ll be back tomorrow with the last of my Comic Bento reviews and more. See you then.

Posted by Tony Isabella at 6:54 AM