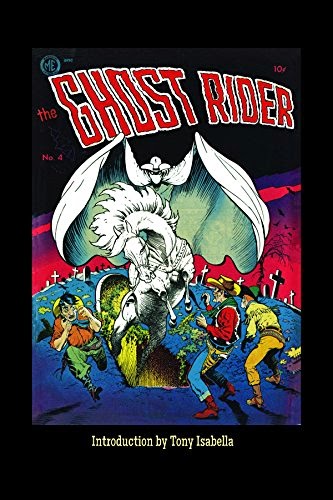 There’s only one original Ghost Rider and his earliest adventures are being reprinted in The Original Ghost Rider Volume 1 by writers Ray Krank and Gardner Fox, artist Dick Ayers and occasional cover artist Frank Frazetta [Canton Street Press; $49.99]. The 192-page hardcover will be released on June 24. Here’s what Amazon says about the book:

This hardcover volume collects Ghost Rider #1-5 and the Ghost Rider stories from Tim Holt #12-14, originally published by Magazine Enterprises from 1949-1951. Ray Krank created and wrote Ghost Rider in Tim Holt #12. The remaining stories are attributed to Gardner Fox. Interior art was handled by Dick Ayers with covers by Ayers and Frank Frazetta. The Ghost Rider would continue its adventures through 1954. Magazine Enterprises would soon close its doors, but the company's most popular character would live on by inspiring a similar character in the 1960s. The art has been fully restored and in keeping with the original coloring of the stories. The hardcover binding is Smyth Sewn with dimensions of 7.25 x 10.25 inches. The introduction is by Tony Isabella.

Did I forget to mention that I wrote the introduction to the book? Oops! I suppose it could be true that memory is the first...what was I saying just then?

I wrote a 1500-word introduction to this initial volume and, while it may not be worth the price of the book all by itself, I think it turned out pretty good. Of course, because that introduction is in the book, I can’t repeat any of it here. You’ll have to check out this collection to learn all sorts of fascinating facts and cagey conjecture about the original Ghost Rider.

What I can do is remind you how many Ghost Riders followed the one and only original Ghost Rider. The long line of pretenders to the name was begun in 1967 when Marvel Comics, under circumstances some might consider somewhat suspect, launched a new Ghost Rider title. Plotted and drawn by original GR artist Ayers...and written by Roy Thomas and Gary Friedrich...the new Ghost Rider was schoolteacher Carter Slade. This short-lived series ran a mere seven issues, but the character showed up in Western Gunfighters where he died and, presumably, became a real ghost.

Sidekick Jamie Jacobs was the next Ghost Rider, but he didn’t last long. Following Jamie’s death, Marshal Lincoln Slade, the brother of Carter, became the next Ghost Rider. I stopped caring about the Ghost Rider lineage after that, but a visit to Wikipedia reminded me the character’s name was changed to Night Rider - an incredibly ignorant choice, given that moniker was used in the Southern United States to refer to Ku Klux Klan members - and then Phantom Rider. There were apparently four different Phantom Riders or other-named characters with some ties to the Slade family. Some were heroes and some were villains. Some were alive and some were not. None of them was anywhere near as interesting as either the original Ghost Rider or Carter Slade.

Why did Marvel change the name of its western Ghost Rider? Because,  by some sort of comics eminent domain, it wanted to use that name for a new modern-day Ghost Rider. The new Ghost Rider was created by Gary Friedrich with editorial input by Roy Thomas and a spooky visual by artist Mike Ploog.

The new Ghost Rider was Johnny Blaze, who sold his soul to Satan to protect his adoptive father. Satan cheated. Johnny got cursed and became the flaming skull-headed, motorcycle-riding new Ghost Rider. There’s much more to the story than that, but this Ghost Rider was a pretty spiffy character. I was the second regular writer on the title and worked on it for two years or thereabouts.

Johnny Blaze was only the first modern-day, motorcycle-riding Ghost Rider. He was followed by Daniel Ketch, a Nicaraguan woman named Alejandra, and, in 2014, young Latino Robbie Reyes, whose method of transportation was a demon-fueled muscle car. I thought the first modern-day Ghost Rider series and the most recent one were good and sometimes great. The others...not so much.

There were also a few alternate universe versions of Ghost Rider, but just thinking about them makes my brain hurt. If I read any of them, I don’t remember them. Sometimes an inconsistent memory can be a blessing.

Getting back to today’s main topic, The Original Ghost Rider Volume 1 is available for pre-order from Amazon. You should order it. Not just because I think you’ll enjoyed those wild western adventures, but also because if this volume sells well enough, there will be a second volume.

Help me out here. I want to read more stories of the original Ghost Rider. Is that so much to ask?

Posted by Tony Isabella at 1:54 AM