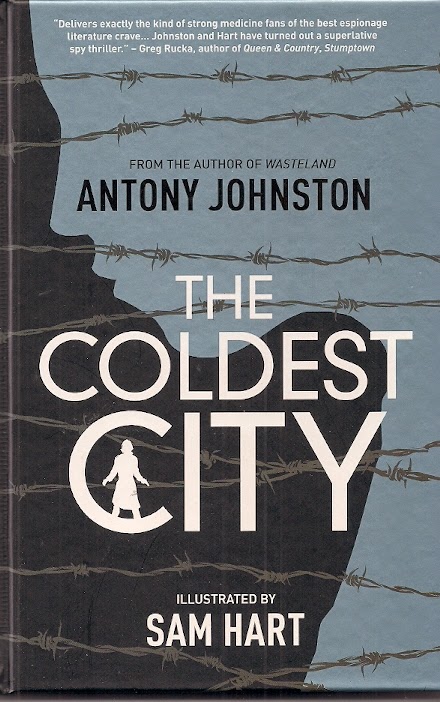 I received my first Comic Bento box earlier this month. Here’s the second of the four reviews I’ll be writing of the graphic novels in that box...

The Coldest City by Antony Johnston and Sam Hart [Oni; $19.99] was published in May, 2012. It was to be the first of a series of spy  thrillers, but, so far, Johnston has not released a second graphic novel in that genre.

The fall of the Berlin Wall is the backdrop for this graphic novel. Lorraine Broughton, a veteran British intelligence agent, is sent to the city on short notice and with little preparation to recover a list naming every spy in Berlin. The claustrophobic and paranoia-inducing setting and tone of the book makes it an interesting and sometimes unnerving read.

The spy play in this book comes in multiple shades of grey. There is the verbal fencing between agents of different and sometimes the same countries. There are dangerous missions carried out under the very noses of the Russians. There are violent confrontations as it becomes clear a secret assassins group is at work. Broughton never knows who she can trust and who is what they claim to be. For the reader, that’s true for every single character in the book.

Johnston’s writing is excellent and he wrings great suspense from both the action sequences and the debriefing sequences between his protagonist and her superiors. However, an unnecessary affectation - having some characters speak in their native language without any English translating - is annoying in the extreme. That was one of those darlings that the writer should have killed...with extreme prejudice.

Hart’s art is less successful. It was so minimal at times I wasn’t sure who characters were or what they were doing. When a comic is  in black-and-white, the artist needs to add sufficient detail and shading to make the storytelling clear.

Overall, I liked The Coldest City and would gladly read another spy thriller from Johnston.

Things are getting crazy busy - mostly in good ways - here at Casa Isabella. I’ll likely go into far more detail early next week when I announce my next major project. In the meantime, I’ll be writing odds and ends bloggy things like this one.

First and foremost, I want to remind you that, on Free Comic Book Day, I’ll be at Heroic Adventures Comics & Pop Culture Store, 126 Gnau Ave SW, Unit A in Massillon, Ohio. I’ll be there from 11 am to 4 pm. You can get more details here.

Much to my dismay, I’ve not yet heard from any LGBT advocacy group that wants to share my Indy Pop Con table and provide information about fighting discrimination in Indiana. You can read what I have had to say about this here, here and here.

My back-up plan is asking any such group to provide informational materials I can distribute from my table. As always, any interested parties should email me sooner rather than later.

The Beat and other news sites are reporting that Valiant and Sony have signed an agreement for five Bloodshot and Harbinger movies. My reading of the new Valiant comics isn’t as complete as I would like - I’m working on it - but I love the idea of an entertainment company going beyond DC and Marvel for super-hero content. This is good for Valiant and good for comics in general.

I have watched three more episodes of Marvel’s Daredevil TV series: “Cut Man,” “Rabbit in a Snow Storm” and “In the Blood.” I’m still liking this show a lot.

Vincent D'Onofrio is downright chilling as Wilson Fisk. He looks as dangerous as any comics version of the Kingpin and has the acting chops to convey the brutality and intelligence of the character. But, is it just me, or does this Kingpin remind you of a taller and beefier Brian Michael Bendis? Just to play it safe, I’m going to be really nice to Bendis the next time I see him.

One more Daredevil note. As the guy who first drew and presumably designed the Owl, Joe Orlando’s name is appearing on the creators credit card whenever Leland Owlsley appears in an episode. It may just my imagination, but that creators credits card seems to be on the screen a little longer than in the first episode.

The Internet is buzzing with the revelation that Bobby Drake a.k.a. Marvel’s Iceman is gay. I’m not sure what this means since what I think is the current Marvel Universe has two Iceman. One is Bobby Drake as an adult and the other is Bobby Drake as his teenage self. Judging from the pages I’ve seen online, teen Bobby is definitely gay and adult Bobby is straight, gay or bisexual. I haven’t given this a lot of thought, mostly because I can’t keep all the X-Men titles...err...straight.

I don’t know how I feel about the specific-to-Icemen developments. Before I can form an opinion, I’ll have to read the issues whenever my friend who loans me his comic books loans them to me. But I do have some general thoughts.

What seems to be missing here is the process. I can’t imagine that it’s easy for a person to come to the realization that they aren’t the straight person they always believed themselves to be. I also imagine it would be just as difficult for a gay person to realize they might be bisexual or straight. We’re not seeing the events or feelings bringing these characters to the realization they are not as they believed themselves to be.

Super-hero comics aren’t known for their subtlety. Northstar outed himself as gay via blast-shaped word balloon in the middle of some battle. An important moment like that should not have made me laugh out loud, but that’s exactly what it did.

I think there’s greater drama and understanding to be had from the process through which characters arrive at such realizations about themselves. I think that would be more realistic. Because what is more real in our lives than human drama?

I might have more to say about this in the future. But, for now, I would love to hear your thoughts on all this.

Posted by Tony Isabella at 4:08 AM