UNITY: TO KILL A KING 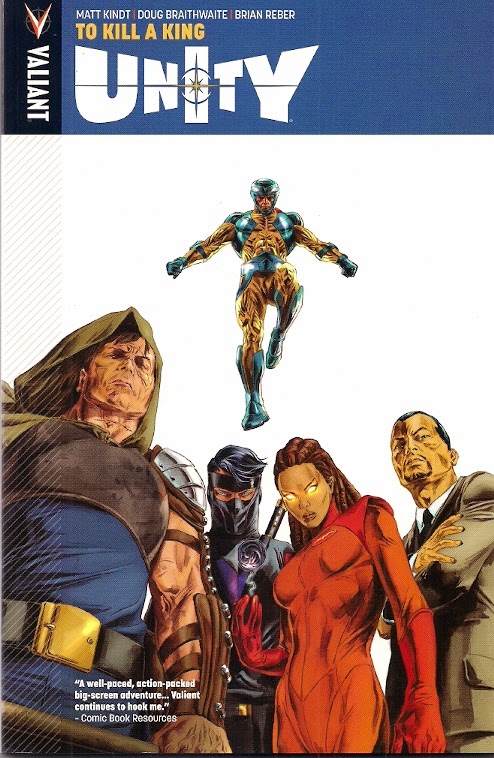 I received my first Comic Bento box earlier this month. Here’s the last of my four reviews of the GNs in that box...

Unity: To Kill a King by Matt Kindt and Doug Braithwaite [Valiant; $14.99] collects the first four issues of Unity from 2013 and 2014. Valiant has a growing super-hero universe and it’s not always easy for an occasional reader like myself to follow all the details in their stories. However, their editors and writers do a decent job bringing such readers into the loop through “what has gone before” bits on the inside front covers and in the stories themselves.

Digression. Do not take my “occasional status” description as any kind of a knock on Valiant’s comic books. I can’t always read comic books and graphic novels as quickly as I would like and it’s not at all unusual for me to be relatively current on one title and years behind on another from the same publisher. End digression.

The situation is that Aric, a fifth century Visigoth, has returned to Earth after being kidnapped by aliens centuries ago. He is the master and wearer of the X-O Manowar armor, which makes him one of the most powerful men on our planet. He has decided that he and his people should have their old lands back, lands which we currently know as Romania. This makes everyone else on Earth really nervous, especially the neighboring Russians. Said Russians are prepared to nuke Aric. Toyo Harada of Harbinger - not a nice guy by any stretch of the imagination - has put together a team of heroes to stop Aric and the dropping of the bomb.

Kindt writes an exciting story. He does a good job introducing his cast. The reader doesn’t learn everything about them, but does get enough information to follow the story. There are scenes of violent action that don’t overwhelm the story. There are surprises deriving from this character or that learning some they didn’t know before. I very much like that these characters are able to adjust to these changing circumstances without becoming drama queens over choices they must make. It’s a solid thriller from start to finish.

Braithwaite is a first-rate artist. I don’t think I have ever seen less than a terrific job from him. He tells the story visually, he draws well, he can portray emotion. As far as I’m concerned, those are the artist’s three most important talents. Colorist Brian Reber adds to the art; his hues complement and never overwhelm the story. Dave Sharpe’s lettering is always easy to read and that is what the reader needs from lettering.

Unity: To Kill a King is good super-hero entertainment. If you like super-hero universes but feel lost in the vastness of the ones from DC and Marvel, Valiant could be a good choice for you.

Look for more Comic Bento reviews when I receive my next box from them. You can also keep an eye out for forthcoming bloggy things in which I discuss boxes I’ve ordered from other companies.

I started watching Constantine this month. The series features the DC Comics character and aired on NBC. Though I had recorded all the episodes of the show, it took a while to convince myself to watch them. It wasn’t the show’s fault. It was DC’s fault.

Way back when, Hellblazer - the long-running Vertigo imprint title - had a story in which a love-struck John Constantine used magic to get a woman to fall in love with him. It being a “mature readers” comic and all that meant the two of them had doubtless magical sex. Does this sound familiar to readers of the current Batwoman comics? It should.

Constantine raped the woman he loved. Dress it up anyway you like, but it was still rape. Now Constantine had never been the purest of protagonists. Far from it. He was a right bastard on any number of occasions. However, when he became a rapist - not to save the world from any awful fate but purely for his own pleasure - Constantine  became a character I no longer wanted to read about. I didn’t read another comic book featuring him until DC launched its crappy “New 52" titles and, even then, I didn’t read many of them.

What got me to start watching Constantine was the arrival of Mark Verheiden as an executive producer and writer. Mark is a friend of mine, but, more germane to this review, he’s a writer whose work I have enjoyed for years. That got me to watch the series.

I have now watched seven of the first season’s thirteen episodes. Here’s some quick thoughts on the show with the usual warning that there be

Constantine is a “demon of the week” show with two ongoing plots. One is some “rising darkness” that alarms even John’s kind of sort of guardian angel. The other is the real identity of Zed, a psychic woman who joined the series in its second episode.

So far, the “rising darkness” thing serves to complicate stories by making things not work as they used to. It wasn’t until the latest episode I watched - “Blessed Are the Damned” - that the uttering of the phrase didn’t make my eyes roll. That episode is also the best of the episodes I’ve watched and indicates we might learn what’s up with Zed very soon.

Matt Ryan plays Constantine. The character's accent was difficult to decipher at first, but Ryan’s toned it down considerably and it’s much better now. None of the acting from any of the ongoing characters or the guest stars has knocked me out, but none of it has been less than decent. If I had to pick the best performance to date, it would be  Jonjo O'Neill’s turn Gary Lester, a survivor of a pivotal screw-up in John’s life.

While “demon of the week” doesn’t allow as much variety as “monster of the week,” Constantine has come up with some interesting change-ups on the concept. In one episode, the “demon” was the soul of a still-living human driven from its human body by the horror of the human’s crimes. In “Blessed Are the Damned,” the big bad turned out to be a duplicitous and murderous fallen angel. I like such variety and hope we see more of it.

Overall, I’d rate Constantine as good enough to continue watching. I’ll be watching the remaining episodes of the first season over the next few weeks.

A second season of the show is far from guaranteed, but, as of this writing, it hasn’t been cancelled. If the series survives for that second season, I’ll keep watching.

This is the part of today’s bloggy thing where I remind you that, on Free Comic Book Day, I’ll be at Heroic Adventures Comics & Pop Culture Store, 126 Gnau Ave SW, Unit A in Massillon, Ohio. I’ll be there from 11 am to 4 pm. I’m looking forward to the event. You can get more details here.

That’s all for now. I’ll be back tomorrow with the announcement of my next major project. I think you’ll like it.