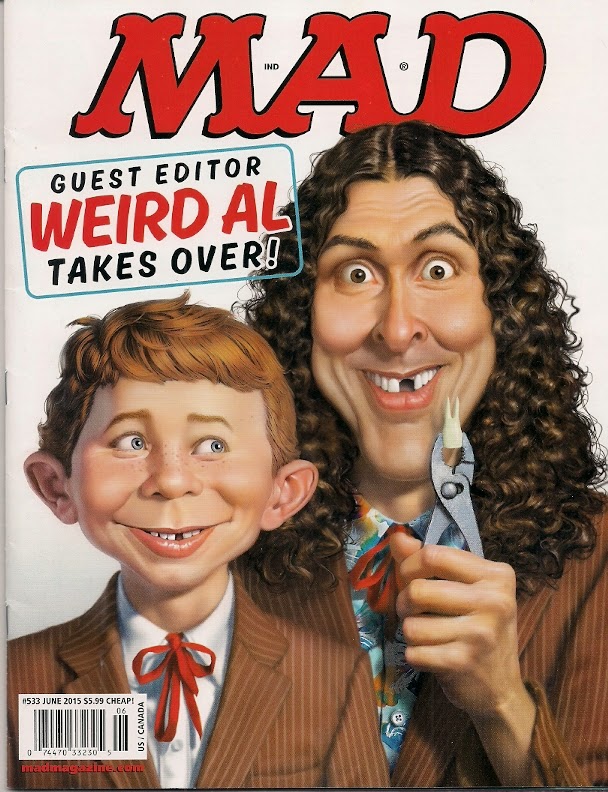 MAD #533 [June 2015; $5.99] boasts something no other issue of this legendary humor magazine has ever had: “Weird Al” Yankovic as its guest editor. What a wondrously mad notion!

“Weird Al” has been a favorite of mine since I first heard one of his song parodies - 1983's “Ricky” - and it’s a love I have shared with my family. Buying each new Yankovic CD is a given around Casa Isabella. The only question being how quickly can I buy them and the answer to that one is almost always the day each CD is released to the public.

Wikipedia lists Yankovic as a “singer, songwriter, parodist, record producer, satirist, actor, music video director, film producer and author”...and you really should read his Wikipedia entry to get a sense of what an accomplished individual he is. With this issue of MAD, “Weird Al” adds guest editor to his resume.

From this issue’s cover to inside back cover, Yankovic’s presence can be seen and enjoyed. He wrote its introductory page, answered  letters from readers, picked a classic reprint for “The MAD Vault” feature and wrote the amusing “Pages from Weird Al’s Notebook.” He is the subject of Al Jaffee’s special “Weird Al” edition of “Snappy Answers to Stupid Questions” and artist Tom Bunk’s double-paged visit to a “Weird Al” concert.

The “Weird Al” material would be enough for me to give this issue my recommendation, but there’s much more. John Caldwell does a fun send-up of ancestry.com. Peter Kuper continues “Spy Vs. Spy” in the proud tradition of Antonio Prohías, the feature’s original creator.  Sergio Aragones takes a look at California. Tim Carvell delivers  a mock-up of a young man’s website in his latest ““Planet Tad!!!!!” spread. “The Strip Club” has comic strips from a selection of cool cartoonists.

Most impressively, writer David Shayne and artist Tom Richmond do a different, surprisingly thoughtful and yet still funny parody of American Sniper. As part of the parody, “Michael Moore” and “Sarah Palin” discuss the movie. It’s a daring take on this MAD tradition and it works very well.
MAD has really upped its game in recent years. The magazine took a nosedive with the 1985 departure of legendary editor Al Feldstein, but it’s back as good as ever. I’ve been a subscriber for several years now and its bimonthly arrival is always a treat. If you have not sampled MAD of late, you should. I think you’ll find it worth your “cheap” six bucks.

Once again, I want to remind you that, on Free Comic Book Day, I’ll be at Heroic Adventures Comics & Pop Culture Store, 126 Gnau Ave SW, Unit A in Massillon, Ohio. I’ll be there from 11 am to 4 pm. You can get more details here.

Lake Placid vs. Anaconda [2015] will debut tomorrow, April 25, at 9 pm. It’s a made-for-television crossover between the Lake Placid and Anaconda movie series. Surprisingly, SyFy has done pretty much nothing to promote this movie. It doesn’t really even have a proper trailer. Just a real short promo clip.

What little I know about the movie comes from Wikipedia and IMDb. The former offers this synopsis:

Killer crocodiles and giant anacondas clash in this thriller about corporate greed and science gone wrong.

Heck, that could be a movie about our political system.

The cast includes SyFy veterans Yancy Butler (likely reprising her role in two previous Lake Placid movies), Robert Englund and Corin Nemec. IMDb includes Nicki Minaj in its cast listing. That could mean the young singer is joining the ranks of music stars who have met their unpleasant demises in SyFy movies at the hands of giant creatures of one kind or another.

Watch for my review in an upcoming bloggy thing.

This is a shorter-than-planned bloggy thing, following a few days of unexpected distractions. But I’ll be back tomorrow with a lot more stuff.

Posted by Tony Isabella at 7:02 AM