THE SHADOW: THE FIRE OF CREATION 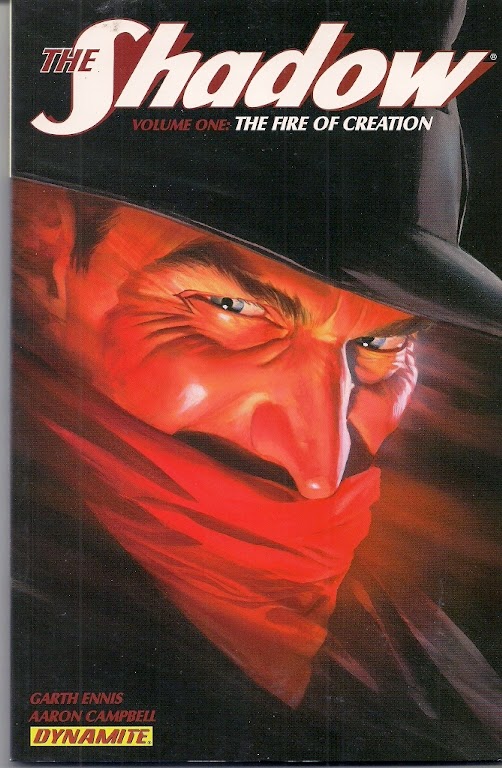 I received my first Comic Bento box earlier this month. Here’s the first of the four reviews of the graphic novels in that box...

The Shadow Volume One: The Fire of Creation is by Garth Ennis and Aaron Campbell [Dynamite; $19.99]. Set in 1938, the story sends The Shadow on a trip across the world to gain materials vital to the interests of the United States in those dangerous years before my country’s entry into World War II.

The adventure takes The Shadow out of the big-city settings I prefer, but the exotic backdrops and the monumental nature of the intrigue surrounding the mission allows Ennis to portray the mysterious hero at his arrogant and manipulative best. It made this reader glad The Shadow is on our side.

I use the present tense because who among us can be sure The Shadow isn’t still with us. I can think of a couple dozen matters I’d like him to look into, fully half of them located right here in the United States of 2015.

This graphic novel contains several scenes of brutal fighting and torture. Ennis is known for his command of history and he doesn’t hesitate to show the horrors the invading Japanese army inflicted on the Chinese people. There is bloody carnage, the consequence of the evil lurking in the hearts of The Shadow’s enemies. The reader should be prepared for a tale as grim as it is exciting.

Artist Aaron Campbell is a suitable partner for the excellence of this script. His certain storytelling is matched by his ability to draw explosive action and expressive faces. Colorist Carlos Lopez and letterer Rob Steen fulfill their roles just as well. This is a good-looking graphic novel.

Bonus material? The original Garth Ennis script for the first issue leads off the end section. That’s followed by an art gallery of all the covers and variant covers for the six-issue series, 14 sketch covers by Alex Ross and one sketch cover by Jae Lee. That adds up to a solid package and a decent value for your graphic novel bucks.

I recommend The Shadow Volume One: The Fire of Creation to comics readers who enjoy The Shadow and adventures set in this turbulent era of modern history.

Look for more Comic Bento reviews soon. I’ll be back on Monday with more stuff.