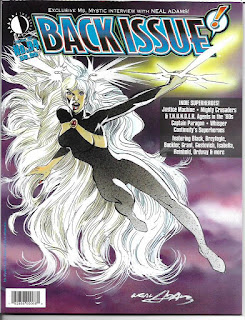 “Indie Superheroes!” is the theme of Back Issue #94 [January 2017; $8.95]. The Neal Adams cover of Ms. Mystic kicks off an examination of such fan favorites as the Justice Machine, Captain Paragon, the 1980s versions of the Mighty Crusaders and T.H.U.N.D.E.R. Agents, Steven Grant’s Whisper, the super-heroes from Adams’ own Continuity Studios and much more. Among the creators interviewed for the issue were Adams, Grant, Bill Black, Norm Breyfogle, Rich Buckler, Mike Gustovich, Bill Reinhold, Jerry Ordway and even some writer by the name of Isabella. The 84-page magazine is filled with history and inside information, side by side with never-before-seen and rarely-seen artwork. It’s the Bronze Age and Beyond!