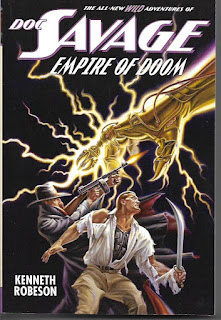 In the category of books I wish I could be reading right now:

Doc Savage: Empire of Doom by Will Murray and Lester Dent writing as Kenneth Robeson [Altus Press; $24.95]. This latest in “The Wild Adventures of Doc Savage” teams up two of the pulp era’s greatest heroes. From the back cover:

It began with the hijacking of a destroyer from the Brooklyn Navy Yard. The stolen warship struck midtown Manhattan with its mighty guns, then vanished far out to sea.

Who were the strange raiders wearing the golden uniforms of no known power who pulled off the daring highjacking? And who was their mysterious leader, a being of seemingly supernatural abilities?

Doc Savage did not know. But The Shadow did! Combining forces, the Man of Bronze and the Dark Avenger follow the trail of a superfoe from The Shadow’s past.

But can they learn to trust one another? From fog-shrouded New York to a futuristic underground kingdom in the heart of Asia, the battle sprawls—with the world’s fate at stake!

Keep watching the bloggy thing, adventure-lovers! I’ll have another Will Murray book to tell you about soon.

Posted by Tony Isabella at 5:23 PM