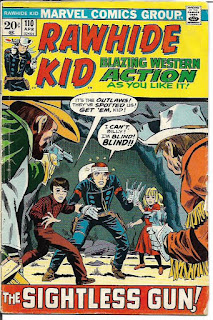 The Rawhide Kid is my favorite western comics character and one of my favorite comics characters period.  Something about the short of stature (but big on courage and fighting skills) Johnny Clay spoke to the short of stature (but big on comics-reading skills) teenage Tony Isabella.  After rereading the Kid’s earliest adventures when Marvel Comics reprinted them in a pair of Marvel Masterworks and an Essential Rawhide Kid volume, I wanted to reacquire every Rawhide Kid comic, reread them and write about them in this bloggy thing of mine. This is the 96th installment in that series.
The Rawhide Kid #110 [April 1973] has a new cover by Larry Lieber with George Roussos inking. Inside, the 14-page “The Sightless Gun” was written and penciled by Lieber, inked and colored by Roussos,  lettered by June Braverman and edited by Roy Thomas. I had started working at Marvel Comics around the time this ish was being readied for publication.

My memory is foggy on specifics, but I remember reading this issue in the office I shared with Sol Brodsky and George Roussos, and it’s possible I read it on the original art boards. My main job was to put together Marvel’s British weeklies, assist Stan Lee on some of his projects, and do this and that on our new black-and-white comic magazines. Before long, I would be asked to proofread color comics on occasion. I still...ahem...marvel...at how much work I could do in my vibrant youth. I can’t remember who asked me to look at this issue. It might have editor-in-chief Roy Thomas. It might have been production manager John Verpoorten. It might have Larry or George.

What I do remember is that I liked the story and complimented Larry on a clever bit in it. I remember his delight over that compliment. And I remember thinking “Holy Cow! Larry Lieber is thanking me for complimenting him!” Pretty heady stuff for a young Marvel fan who was suddenly working with some of the greatest writers and artists in the history of comics.

The Rawhide Kid and his horse Nightwind stumble onto a holdup, but don’t reach the scene is time to stop the owlhoots from shooting an old man and making off with a payroll. Seeing how badly the man is hurt, the Kid rides to a nearby town and fetches a doctor. The man will live, thanks to Rawhide.

Rawhide rides off in search of the polecats what done the dastardly deeds described above. His path takes him to a distant cabin, the home of orphaned kids Billy and Bess. The youngsters recognize the Kid from a book on famous outlaws and allow him to water his horse.

When Billy finds out that Rawhide is after some bad guys, he wants to ride with him. The Kid says it’s a one-man job, but gives the siblings an exhibition of his shooting skills and some good advice. Like, for instance...

Boot Hill is full of ex-fancy Dans! The only way to stay alive is to draw fast and aim true!

Remember a gun isn’t a man’s only weapon! To a real man, brains and courage are more important than all the hardware in the West!

After leaving the kids, Rawhide finds the large cave that serves as hideout for the outlaws. He spots the gang’s loot, but doesn’t see the trip wire that triggers a loaded gun in the rocks above him. The bullet only grazes the Kid’s scalp, but it leaves him blind. He knows he must get out of the cave before the gunmen return and find him. Meanwhile...

Billy decides to mount up and go after the Kid. Bess joins him in this adventure. Yeah, it’s sort of foolish, but these two have been getting by fine on their own. They’re tough kids.

Rawhide is having trouble making his way through the enormous cave. He falls off a ledge and just barely manages to catch the edge of a lower level and pull himself to safety. He has no way to get back to the main level of the cave.

Billy and Bess find him and throw him a rope. He explain what has happened to him and that they all have to get out of this hideout pronto. That’s when they run out of time.

The two outlaws return and see Nightwind and the other horse. They hear Billy and Bess and come after them.

With Billy’s guidance, Rawhide is able to leap across a chasm. But Bess is too scared to make the jump and is caught by the outlaws. The bad guys sense opportunity:

Yeh! Not only can’t a blind man put us outa business, but we’re gonna make ourselves a rep by callin’ out the Rawhide Kid! Y’hear, Kid? We’ll be waitin’ on yuh outside the cave! And if yuh value this little gal, yuh better show!

Billy says the Kid can’t go up against the gunman, but Rawhide has a plan. He has Billy draw a clock in the dirt.

Rawhide will stand in the center of the make-believe clock. Billy will tell him where his foes are standing. This is the bit that I complimented Larry on, though I also told him I enjoyed the Kid’s interactions with Bess and Billy.

The Kid takes out the gunman at the two o’clock position. Figuring the other gunman will shoot at him, Rawhide ducks. In doing so, he hits his head on a stone. The bump restores his vision.

Bess says the Kid was lucky, but in a nice way. Billy says it was more than luck:

Back at the shack, the Kid said that brains are more important than guns! And he was right! He didn’t just outshoot those outlaws! He outfiggered ‘em...all the way!

Rereading this never-reprinted Rawhide Kid story for the first time in forty-four years, I think it’s still terrific. If I ever got a chance to put together a collection of The Best of Larry Lieber’s Rawhide Kid, this would definitely be included. 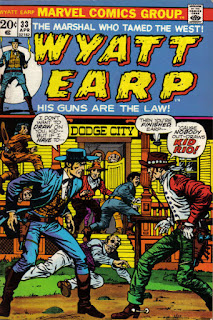 “The Sightless Gun” was followed by a full-page house ad for Wyatt Earp #33 [April 1973}. This reprint series ran for five issues from October 1972 to June 1973. The cover of this issue is by Jack Kirby and Christopher Rule and hails from Wyatt Earp #25 [October 1959].

The issue’s three reprint Wyatt Earp stories first appeared in that issue as well. Written by Stan Lee, each tale was five pages long. They were drawn and lettered by Dick Ayers. As noted by the Grand Comics Database, the stories are all narrated by Earp in the first person...

“Crises in Dodge City!” [GCD synopsis: A crooked rancher tries to assert his water rights and keep it away from his neighbors.]

“Face to Face with the Gunfighter!” [GCD synopsis: A troublemaker tries to hire a famous gunman to defeat Wyatt Earp, but integrity wins out.]

The non-series fourth story was “ The Fastest Draw!” [5 pages]. It was scripted and drawn by Larry Lieber from a plot by Stan Lee. Its original appearance was in The Rawhide Kid #40 [June 1964]. This is one of my favorite Marvel western stories. I wrote about it a few years back and you can read those comments here.

Finishing the issue was a single-page “Color This Picture!” pin-up page drawn by Joe Maneely. It’s from  Wyatt Earp #18 [August 1958].

The house ad was followed by “The Ghost Train!” The five-page non-series story first ran in Western Outlaws and Sheriffs #72 [April 1952]. There are no confirmed credits, but the GCD does put forth Bob Forgione as the possible penciller.

Chuck Mason, a truly despicable man, had the only freighting outfit in Utah and was getting rich off his Mormon clients. He’d convinced them the Carson City suppliers wouldn’t trade with Mormons. Though the story doesn’t emphasize this, Mormons were often discriminated against. Except not this time.

When the Mormon elders learn the Carson City suppliers are willing to deal with them directly, they fire Mason. They plan to build a small train and rail system to carry goods back and forth.

Mason takes exception to this. He murders one of the elders. Then he incites the Shoshones into attacking the Mormons. However, when the Mormons fight back and inflict heavy losses on the Shoshones, the tribe remove itself from the fray.

Mason continues to plague the Mormons all by his lonesome. When he learns of the train’s trail run, he steals the train, hitches it to a wagon and drags it to a hidden valley. Small train or not, this seems pretty unlikely to me.

The train explodes in the hidden valley, killing Mason and all of his horses. Hence the legend of “the Ghost Train.” Years later, a prospector finds the remains of the train. The mystery is solved.

“The Ghost Train” doesn’t even rise to the level of mediocre. The writing is stiff, the art is journeyman at best and the villain is so crazy that I had to wonder how he was able to cheat the Mormons in the first place. Thumbs down on this one.

This issue’s “Marvel Bullpen Bulletins” is the same one that ran in the previous issue. Marvel’s continued expansion was likely taking a toll on its small staff. Somewhere down the line, near the end of my time with Marvel, I would write some of the Bullpen Bulletins. But not many of them.

This issue’s “Ridin’ the Trail with Rawhide” letters page has three missives from readers. First was C. Johnson of Brooklyn, New York. He or she wrote in praise of “The Sinister Sons of Ma Morgan” from Rawhide Kid #105.

Robert A. Gillis of Elmsford, New York thinks it’s not time for a revival of the (western) Ghost Rider. He would rather see more of “the unique life of the gunslinger,” such as Kid Colt. However, he adds that if fandom demands the return of Ghost Rider, then giving the character a back-up feature in Rawhide Kid or Kid Colt Outlaw would be the way to go.

Pierre Champagne writes to praise the inking of Vince Colletta on Lieber’s pencils. As much as I appreciated Vince on other titles, I never thought he was a good match for my pal Larry.

That’s it for this installment of “Rawhide Kid Wednesday.” I’ll be back tomorrow with more stuff.