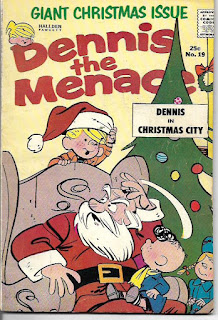 This is the 2017 version of my ongoing “OC” series, which has been re-branded because I kept wanting to add a “D” to “OC.” Previously, this series was going to cover random comics from my legendary Vast Accumulation of Stuff, with the only restriction being that these comic books would predate my entry into the professional ranks of the comics industry in late 1972. For this retooled version of the series, that restriction has been eliminated. I’ll still stick to older comic books as much as possible, but if I come across comics from the 1970s through the 1990s that I find interesting enough to write about, I’ll write about them.

According to the Grand Comics Database, Fred Toole wrote all this issue’s original stories. It does not lists artists, but, if I can get my soon-to-be-deep-sixed scanner to cooperate, I’ll include a few sample pages for the art detectives among you.

Warning. There will be...

Dennis the Menace gag panels by Hank Ketcham appear throughout the issue. These are, of course, taken from the daily newspaper strip. The inside front cover has four such panels, all Christmas-themed. My favorite of the batch has Dennis hiding under the kitchen table while his parents, knowing he’s there, talk about what the lad will be getting for Christmas:

“Now that we’re alone, I’ll tell you what I bought Dennis for Christmas. A beautiful set of bath towels!”

“Ding Dong Dennis” (10 pages) leads off the new stories. Dennis and Joey ride a special Santa train for kids. The various entertainers feel the pain, though the magician who pulls pennies out of their ear seems okay with them. Not so the workers at a department store where the kids try to spend their pennies, which, even in 1963, did not go far. Finally, one of the clerks cracks and sells them yo-yos for a penny apiece:

He said it was a special sale...just for us! 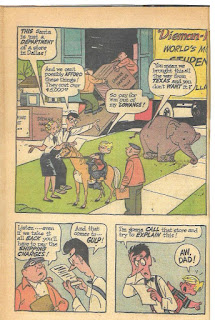 Toole goes big for “$anta'$ $urpri$e!” (12 pages). Dennis wants to write a letter to Santa, but his dad has had enough. He tells his son that he can’t have a real submarine and a real pony and a real elephant. To occupy Dennis, Dad gives him a fancy “Dieman-Harcus” catalog. Dennis fills out the order blank for over $5000 in really cool stuff and, since it’s the kind of letter that doesn’t need a stamp, he mails it.

The president of the Texas-based Dieman-Harcus is thrilled. This is the biggest single order they have ever received. That $5000 would be close to $40,000 in 2017 dollars.

There’s no check with the order, but the Dieman-Harcus boss takes off on a flight of convoluted logic. He convinces himself that this “Dennis Mitchell” must be some kind of eccentric millionaire who is good for the money. The company ships the Mitchells a helicopter, an elephant, a submarine and a cow pony.

Henry and Alice Mitchell are stunned when the huge truck drives up with the delivery. Obviously, they can’t pay for this stuff. They call the company. The president thinks it over for a spell. Even the return shipping charges are pretty hefty. That’s when the big boss gets an idea.

He turns this comedy into huge publicity for his company. Dennis is all over the newspapers and magazines. So much publicity the boss says he’ll pay the return shipping charges. He gives the elephant to the local zoo and the pony to a local playground...where Dennis can ride him every day.

Oh, yeah, and Dennis finally gets to write his letter to Santa. He asks for a real fire engine and a real motor boat and... 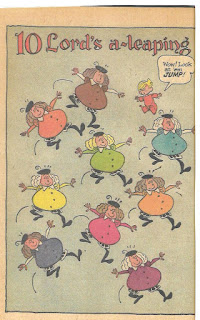 The 15-page “12 Days of Christmas” has Dennis trying to make sense out of the classic song. Each day gets a wonderful full-page panel. A classic tale to be sure.

In the five-page “No Christmas?!?!?”, Dennis learns Christmas will not be at his house this year. He and his folks are going to spend the holiday with his grandfather in Bethlehem, Pennsylvania. Ruff will stay with the neighboring Wilsons.

“Dennis in the Christmas City - Bethlehem Pennsylvania” (13 pages) is filled with fun and fun facts about the city. Dennis meets some Amish folks and eats a fabulous meal at the Cherry Hill Restaurant. I don’t know if this was an actual restaurant or a fictional take of the German eateries often located near the Amish in Pennsylvania and Ohio.

Next comes two more “Coloring Pages” taken from Ketcham’s panels. In one of them, Margaret makes her only appearance in this special. She asks Santa for “one mink coat, size six.” The events of “'Twas the Day Before Christmas and (After a Search) the Mitchell's Found Dennis and Took Him to Church...” (10 pages) are pretty much covered in the title. This is a special children’s service where the kids get cookies and milk in lieu of the usual communion. It includes a lovely full-page shot of the church during the service.

Dennis the Menace sort of lives up to his name in “The Star Over Bethlehem Shone Through the Night on Dennis, and then By Dawn's Early Light...” (11 pages). He calls the Wilsons to talk to Ruff, staying on the phone for thirty minutes. Those of you who are of my generation will recall how expensive long-distance calls could be. Given a toy phone, Dennis decides he’d rather practice on the real thing. Punching in a bunch of numbers, he ends up calling Hong Kong and wishing the folks on the other end a Merry Christmas.

Merry Christmas? Maybe not so merry for Henry. As Dennis, Alice and Grandpa wish the readers a Merry Christmas, Henry slumps in a chair and imagines money flowing away from him.

The inside back cover features four, Christmas-themed daily Dennis the Menace cartoons by Ketcham. I forgot to mention that there are no ads - house ads or otherwise - in this comic book. Counting the covers, it’s 84 pages of entertainment. 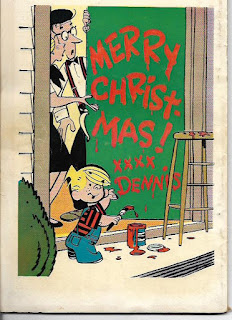 The back cover has Henry and Alice opening their front door to see Dennis has painted a message on it:

The GCD doesn’t identify who drew this back cover. I wouldn’t rule out it being one of Ketcham’s daily Dennis cartoons. Take a look at it and see if you agree.