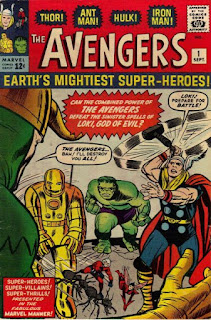 The Avengers #1 [September 1963] hit the newsstands in a month that saw the debuts of Marvel’s second and third super-hero teams. Or, if you consider Sgt. Fury and His Howling Commandos to be a super-hero team, the company’s third and fourth super-hero teams. From what I have learned from comics historians in recent years, launching two super-hero teams in the same month wasn’t Marvel’s original plan. I’ll try to sum up the situation briefly.

In 1961, learning of the success of DC’s Justice League of America title, Marvel publisher Martin Goodman told editor/writer Stan Lee to come up with a super-hero team comic series of their own. With Jack Kirby, Lee created the Fantastic Four...and changed the face of comics forever.

Unable to draw upon pre-existing super-heroes as DC had done with its Justice League - Marvel hadn’t published super-hero comic books since the early 1950s - Lee and Kirby had to create new heroes for the Fantastic Four. Okay, the Human Torch was a new version of the 1940s hero and the Thing looked like some of the monsters who were appearing in Marvel sci-fi titles like Journey into Mystery, but the Four were not your father’s or even your older brother’s super-heroes. They were new characters with more or less realistic personalities. They took the comic-book world by storm. No pun intended.

More Marvel super-hero success stories followed. The success of the Amazing Spider-Man led to the creation of Daredevil by Lee and Bill Everett. However, the release of Daredevil was delayed because of Everett’s slowness in delivering the art for the first and, as it would turn, the only issue of Daredevil he’d draw. Something had to come out on Daredevil’s original release date...and that something was The Avengers #1.

By 1963, Marvel had a few other super-heroes in its universe...and almost all of them were recruited for the Avengers. The only ones who didn’t get drafted were Spider-Man and Doctor Strange. Goodman got the super-hero team he had wanted back in 1963, a team composed of existing Marvel heroes: Ant-Man and the Wasp, the Hulk, Iron Man and Thor. Definitely not the Justice League, but a cool and unusual line-up all the same.

That first issue has been reprinted at least a couple dozen times. The Grand Comics Database hasn’t been able to keep up with all of those reprints. In fact, since I don’t own a copy of The Avengers #1 any more, what I read for today’s bloggy thing was 1993's Marvel Milestone Edition: Avengers Vol. 1, No. 1.

Since the odds are good that you’ve already read this first story, I’m going to dispense with spoiler warnings for “The Coming of the Avengers!”

The bare bones synopsis: Loki wants to use the Hulk to defeat Thor. Things don’t go exactly as planned and other heroes also enter the fray. The heroes figured out who the real bad guy is and take Loki down. They form the Avengers.

This 22-page adventure is written by Lee, penciled by Kirby, inked by Dick Ayers and lettered by Sam Rosen. Kirby and Ayers are also the cover artists. Looking at this story, you’d never guess it was produced under a tight deadline. It bounces from scene to scene so smoothly that, when I first read it, I marveled - pun intended - at its pacing.

When the story begins, Loki is imprisoned on the Isle of Silence. He uses his powers to reach beyond his confinement to find the Hulk and make it look as if the Green Goliath has gone berserk. But Rick Jones, the Hulk’s teenage pal, doesn’t buy it. He wants to prove the Hulk’s innocence, but, just in case, summons his ham radio buds in the Teen Brigade to ask for help from the Fantastic Four. Loki jams that message to send it to Don Blake, the lame doctor who is secretly Thor. But Ant-Man, the Wasp and Iron Man also receive the Teen Brigade summons.

The Fantastic Four also intercept the message which was originally intended for them. Reed Richards says that they are wrapped up in another case of their own, but informs Rick other heroes have heard his plea for help.

The Marvel Universe continuity is all over these opening pages. In many ways, it was the first major continuity epic of the Marvel Age of Comics.

Sidebar. Avengers #3 was my first issue of the title. Once I’d been well and truly hooked by Fantastic Four Annual #1, it took me time before I could start buying the other Marvel super-hero comics. I was always doing extra chores and such to make money to buy comics. Forced to choose between the third issues of the Avengers and the X-Men, I went with the former.

The action never stops in this issue. Loki casts an illusion that reveals his involvement in the Hulk’s so-called rampage. Thor heads to Asgard to confront his brother. The other not-yet-the-Avengers find the Hulk - disguised as a clown-faced robot - at a circus and the battle commences. Meanwhile, Thor fights his way past all sorts of perils set in his path by Loki. Looking for a quiet panel? You won’t find it here.

For reasons that make no sense to me now, but didn’t bother me in 1963, Thor takes Loki to Earth so the Hulk and the other heroes can get their licks in. Loki becomes radioactive. Ant-Man and the Wasp trap him in a lead-lined take. The God of Evil gets his Asgardian ass handed to him by mere mortals.

Ant-Man and the Wasp suggest the heroes form a team. Iron Man and Thor are for it. So is the Hulk who, sick of being hunted, says he would rather be with them than against them. Of course, the Hulk’s membership didn’t last long, but I bet it still came as a surprise when he quit the team at the end of the second issue.

Is “The Coming of the Avengers” a classic comics story? Maybe not. But I found it as exciting and as much fun to read in 2017 as I did when I finally got a copy of the issue in 1964. It truly stands the test of time. 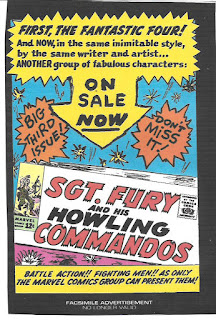 There were three full-page house ads in this issue. The first was for Sgt. Fury and His Howling Commandos #3, sans the full cover of the issue. For more on this issue, go to its Grand Comics Database entry. 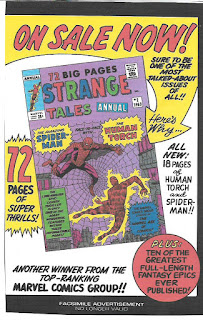 The second house ad was for Strange Tales Annual #2. You can learn more about this annual’s contents here. 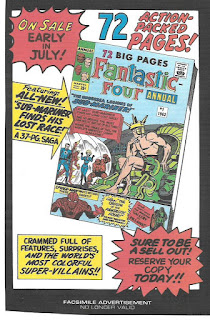 The third and final house ad was for Fantastic Four Annual #1. I’ll be writing about this issue later in this July 1963 series, but, if you want to know the contents right now, go here.

I hope to bring you these blasts from July ‘63 more frequently in this new year. There are a lot of issues to cover, provided I can track them all down.

Tomorrow’s bloggy thing will feature another comic book from 1963, though from later in the year. See you then.