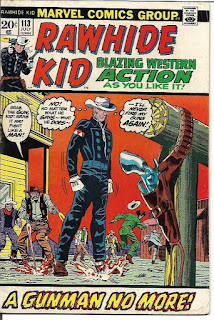 The Rawhide Kid is my favorite western comics character and one of my favorite comics characters period.  Something about the short of stature (but big on courage and fighting skills) Johnny Clay spoke to the short of stature (but big on comics-reading skills) teenage Tony Isabella.  After rereading the Kid’s earliest adventures when Marvel Comics reprinted them in a pair of Marvel Masterworks and an Essential Rawhide Kid volume, I wanted to reacquire every Rawhide Kid comic, reread them and write about them in this bloggy thing of mine. This is the 99th installment in that series.
The Rawhide Kid #113 [July 1973] has a fine dramatic cover penciled by Larry Lieber with inks by George Roussos. Inside, the all-new “A Gunman No More” (14 pages) is written and penciled by Lieber with Roussos inks, Linda Lessmann coloring and June Braverman lettering. Roy Thomas is the editor.

The Rawhide Kid rides into a town and, not seeing any sign that it has a sheriff, figures it will be safe to pick up supplies before moving on. He’s recognized by young Billy Binns who has a bunch of questions for him. When asked how many men he has killed, Rawhide responds:

More than I wish I had! But none who didn’t deserve it!

At the general store, the elderly shopkeeper is being roughed up by five “galoots” and the Kid won’t stand for that. The galoots draw on the Kid. Rather than kill them, he wounds them. But one of the men moves to catch Rawhide in a crossfire.

Just then, Billy’s dog runs into the street. Billy tries to catch up, but ends up getting shot. No one knows if the bullet came from the Kid or one of his opponents.

The gunfight is over. The Kid takes Billy to the doctor. The boy is hurt bad, but the doctor says he’s young and strong. He’ll survive. Outside of town, Rawhide’s guilt over the boy’s injury leads him to a decision:

I drew iron to protect a shopkeeper who was being bullied. And now an innocent boy’s life hangs in the balance!

I’m no fool! I never figured that gunfighting as a game. I always knew it was a deadly business!

But, who knows what the next shoot-out may cost in human suffering! Well, there won’t be another shoot-out...at least not for me!

Because I’m taking off my guns...and putting them away...for good! From now on, come what may, I’ll face my problems without hardware! My days as a gunslinger are over!

His guns stored in his saddlebags, Johnny Clay (aka you-know-who) finds a nice peaceable town with no sheriff’s office. The general store has a “clerk wanted” sign in its window. Since he’s clerked before and seems “a clean sort,” he gets the job. He also catches the eye (and vice versa) of the shopkeeper’s lovely daughter Nan. Romance blossoms in this peaceful setting:

Know what I like most about you, Johnny? The fact that you don’t pack a gun! I hate ruthless men who swagger around with death on their hips! You...you’re different! You’re kind and gentle!

Coincidentally, back in my disco-dancing days, women often told me I had death on my hips. Which, now that I think about it, might not have been a compliment.

Cut to a nearby town where the nasty Cheeno Yates is gunning down another gunslick. One witness says Yates is the fastest gun he has ever seen. Another witness says he once saw one faster. Confronted by the angry Yates, the second witness says he was thinking of the Rawhide Kid.

Yates is sick of hearing about the Kid. He’s going to find him and put him in the ground.

Back to Johnny and Nan. The Kid can’t believe how happy he is and worries it won’t last. They kiss.

A few days later, Yates comes to town and demands the townspeople tell him where to find the Rawhide Kid. He’s tracked the Kid here. No one knows who or where the Kid is, but gossip spreads throughout the community...

CITIZEN A: Whut in tarnation would the Rawhide Kid be doin’ in our town?

CITIZEN B: Mebbe he’s reformed! Mebbe he’s trying to make a new life for himself!

CITIZEN A: Every hombre’s entitled to a second chance! If the Kid has turned over a new leaf, let ‘im be!

Johnny figures on laying low. Nan is curious about the notorious outlaw and wonders who he is. Johnny says:

Maybe he’s an a hombre who’s trying desperately to buy peace and quiet.

Yates is “plumb out of patience.” He vows to burn down the town if the people don’t tell him who the Rawhide Kid is.

Davy, the son of the blacksmith and someone who we’re seeing for the first time in this story, straps on his guns. Though he is not a gunsmith, he “dearly loves this town.” He plans to pretend to be the Rawhide Kid and face Yates.

Johnny stops Davy. He goes back to the store and straps on his own guns. Nan is shocked, but she understands that he can’t allow Yates to threaten an entire town. The townspeople are just as surprised.

CITIZEN B: Look how natural he wears those guns...and the slow deliberate way he moves!

CITIZEN C: Like no storekeep that I ever saw before!

Yates gets the gunfight he wanted...and a quick trip to Boot Hill. Nan and Johnny both know their romance is over.

Johnny wanted to spare Nan any hurt, but that wasn’t in the cards. He says goodbye to her and rides out of town. He doesn’t know where he’s going. Just somewhere where he can forget what was nearly his and start over again.

Nan and her dad wish him good luck. Nan reflects:

So long, Johnny! I’ll remember you always! You and the life...that almost was ours!

“A Gunman No More” is an outstanding story. Lieber was at the top of his game, which makes it all the sadder that there will only be two more new Rawhide Kid stories in this series.

This is also another story that has never been reprinted. Cue my usual statement that Marvel really needs to publish a collection of The Best of Larry Lieber’s Rawhide Kid. 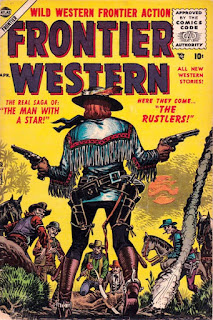 Next up is “Man with a Star” (5 pages) by Stan Lee and George Tuska with new coloring by Linda Lessmann. The non-series tale originally ran in  Frontier Western #2 [April 1956].

Wade Thompson is appointed sheriff of Carson County. The mayor, who is apparently mayor of the entire county, cautions him:

Remember one important thing, Wade...you’ve always been a rough and tumble cowboy...but now you represent the law! You’ve got to keep that temper of yours in check...no fights...unless they’re to keep law and order!

Thompson commits himself to his new job 24-hours-a-day. He quickly makes Carson County the most lawful area in the state.

Some folks think Thompson is doing too good a job. They think he’s taking the fun out of the place. That maybe he should take his job a little less seriously.

Thompson gives a big “hell, no” to that suggestion, but the moment is interrupted when he’s told the dreaded Utah Kid just busted into the bank.

Thompson confronts the Utah Kid, but the outlaw shoots the gun out of the sheriff’s hand. The Kid makes Thompson walk out of the bank in front of him. He tells the townspeople he’s riding out of town with the sheriff. If any follows him or tries to stop him, he will shoot the sheriff.

Thompson gives another “hell, no” speech...

There’s only one of him...and a dozen of you. In five seconds, I’m gonna reach for the Kid’s gun! When he shoots me, one of you can get him! If he doesn’t shoot me, I’ll get him!

When I took this job, I swore to uphold the law...that don’t mean lettin’ killers escape...

The Kid says he’ll shoot the sheriff first! The townspeople beg to differ. They’ll plug the outlaw if he shoots their lawman!

The profusely-sweating Utah Kid gives up. The sheriff had something worth dying for. The outlaw didn’t.

The townspeople apologize to Thompson. He’s the best lawman they’ve ever had or ever will have. As long as he wants the job, no one is going to run against him.

Another terrific short story with a clearly-defined hero, a just-as-clearly-defined villain, a crisis, suspense, and a satisfying ending. All in five pages. This is where I make my usual statement that Marvel also needs to do a collection of Stan Lee’s best non-series western stories.

There’s no letters column in this issue, probably due to the issue have 19 pages of stories. The usual story count during this period of Marvel history was 18. 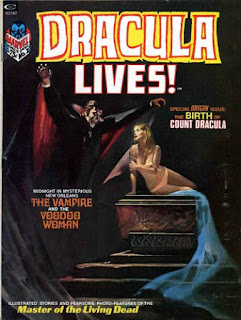 There’s a full-page ad for “the second sanguinary issue” of Dracula Lives!" [1973] with “the terrifyingly true origin of the master of the undead,” “The Vampire and the Voodoo Woman,” and “The Thing That Stalked Castle Dracula!” The origin tale was by Marv Wolfman and Neal Adams. The second story, set in New Orleans, was written by Roy Thomas with art by Gene Colan and Dick Giordano.

The third story was set in World War II and holds a special place in my still-beating heart. It was plotted by Steve Gerber, laid out by Jim Starlin, finished by Syd Shores and scripted by yours truly. I loved working on it and, to the best of my recollection, never turned down a chance to write a Dracula story. However, I did have to pass on writing a Blade series because I was just too busy with my other Marvel assignments.

The Marvel Bullpen Bulletins page is only a half-page and it just don’t got that zing. It’s mostly plugs for existing stuff and hints about stuff in the works.

There are also some staff announcements. Johnny Romita is the new Art Director. Marie Severin is overseeing all Marvel’s coloring. Marv Wolfman is the new and chief assistant editor, the start of his meteoric rise to fame and fortune, great power and even greater responsibility.

The bottom half of the page is an ad for the Friends of Old Marvel fan club. Otherwise known as FOOM. 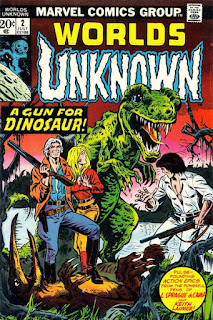 Finishing up the editorial content this month is a full-page house ad for Worlds Unknown #2 [July 1963]. The cover is by Alan Weiss with extensive revisions by John Romita. Inside the issue are two stories...

“A Gun for Dinosaur” [14 pages] is from the story by L. Sprague deCamp. Scripted by Roy Thomas, it’s drawn by Val Mayerik (pencils) and Ernie Chan (inks).

“Doorstep” (7 pages) is from the Keith Laumer story. Gerry Conway is the writer with art by Gil Kane (pencils} and Tom Sutton (inks).

Posted by Tony Isabella at 8:44 AM