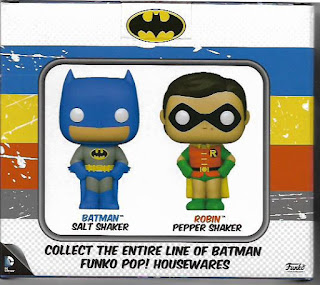 I love a mystery and I love getting cool stuff in the mail. Thus, I was a prime potential customer for the various subscription boxes  offered to comics and other fans. I think Loot Crate was my first.

Subscription boxes aren’t unique to comics, gaming, horror/sci-fi fandoms or pop culture in general. There are or have been boxes for groceries, snack foods, alcohol, educational stuff, fashion, make-up, pets, sex toys and much more. What they all have in common is that they physically deliver niche and often exclusive products to their buyers.

Loot Crate was my first, but, after a while, I decided the contents of those boxes were more miss than hit with me. Too many gaming and anime items. I needed to get more specific to be passion for comic books and related items.

I currently subscribe to three bi-monthly subscription boxes: The Marvel Collector Corps Box, the DC Legion of Collectors Box and the just-launched Stan Lee Box. I’ll be writing about all these boxes in the next few weeks, but, for today, we’re looking at the January “DC Legacy” box.

I have a “Sidekick Membership” in the Legion. Every other month, I am automatically billed $25 plus postage and handling and receive a box containing “$50 of value in exclusive, high-quality DC Comics and Funko collectible products. No fluff, no filler!”

There is no set commitment with this membership. I can cancel this subscription at any time. I don’t see myself doing this because I have been delighted with each of the boxes I’ve received.

My favorite item this time around was the set of Batman and Robin salt and pepper shakers that pay homage to the classic TV series of the 1960s. Funko figures make me smile; these had me grinning from ear to ear as I showed them to my family. 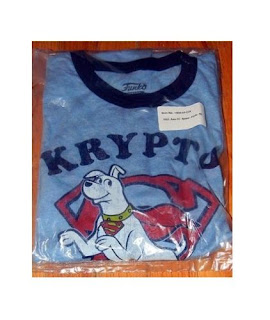 My second favorite item was the Krypto the Superdog t-shirt with a ringer collar. My son Eddie cast envious eyes on this shirt when he saw it. But, once I put it on and found it to be very comfortable, there was no chance of my giving it up. Some boxes got an alternate shirt: Ace the Bat-Hound. The Ace shirt looked pretty cool and, if I ever find it sold separately in my size, I’ll doubtless buy it. 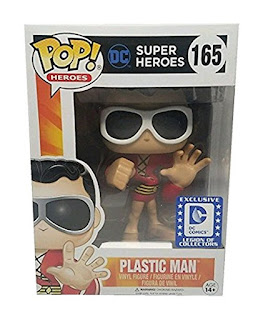 Other items included a Plastic Man figure with one stretchy arm. It looks great. When I first started ordering these subscription boxes from DC and elsewhere, I figured I’d sell some of the items to help defray their cost. Except that now that I’m in love with the Funko figures, I don’t think I’ll be able to part with any of them. 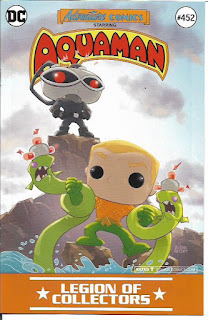 The box had a comic book as well: Funko #6: Adventure Comics 452. It had a Funko variant cover by Adam Archer. Inside, it reprinted “Dark destiny, Deadly Dreams” by David Michelinie (writer) and Jim Aparo (artist) with Jerry Serpe (colorist). This 1977 story was a momentous one with the return of Black Manta, a revelation on the villain’s identity and a rift between Aquaman and Aqualad. It also had the murder of Aquaman’s toddler son, a development with which I was not happy back in the day and still despise. Had I remained writing for DC and accepted the company’s offer to become the new Aquaman writer, I would have undone that sensationalistic death in my first issue.

Here’s what I wrote about my plans over a decade ago...

I accepted the Aquaman assignment for one major reason: I was pissed that Aquababy had been killed off. I thought it was a cheap and cruel story development and, rightly or wrongly, I believed it was done because parenthood was not considered a "hip" thing for a super-hero. Carl Barks had shown us just how many good stories you could get out of a parent/child relationship in his wonderful Uncle Scrooge and Donald Duck stories. I saw no reason why good stories, albeit probably not as hilarious, couldn't be derived from the same relationship in super-hero comics.

Digression. In my original series plan for Marvel's “It, the Living Colossus,” Bob O'Brien was married to his actress-girlfriend with two teen or nearly-teen children. Anyone in the family could have projected their consciousness into the Colossus and controlled it.  Marvel wanted to go in a different, more traditional super-heroic direction. End of digression.

I wanted to write Aquaman just so I could bring Aquababy back to life. The kid was the product of a marriage between the mixed-species Aquaman and an other-dimensional queen. As I saw it, we only thought he was dead when he was actually going through a metamorphosis.

While the revived Aquababy would still have been a very young child, his mental development would be that of a child in his early teens. Moreover, he would be a genius. I'm talking Reed Richards in Huggies here.

This would freak out the Atlanteans big-time. These were not, as I saw them, the most forward-thinking of people. I mean, they used to boot children out of their city just for having purple eyes or some such. A baby who came back from the dead and was now much smarter than they were, well, that would have to be the work of the devil or their undersea equivalent thereof.

Aquaman would put his family first. He'd renounce his throne, leave Atlantis, and shortly thereafter become a nautical power unto himself. While the stories would always revolve around Aquaman and his family, I also planned to have him put together and lead a team of adventurers and heroes.

Aquaman's new team would be like unto an oceanic Blackhawks. I figured it would include Aqualad, Dolphin (who had, at the time, appeared in but one issue of Showcase), a couple of mer-people from the Superman/Lori Lemaris version of Atlantis, at least one of the nearly-forgotten Sea Devils, and other characters to be announced later. I planned to create new heroes and pick E. Nelson Bridwell's brain for any existing DC characters who might well fit into these demented plans of mine.

I figured Aquaman's activities would annoy and anger a whole bunch of people. His former subjects. Some of the surface world's governments if he opposed their interests. Maybe even some of his Justice League buddies. Lots of possibilities.

That's as far as I got with my plans. I never worked out any plots, never wrote even one page of script. I left DC and didn't write for them again for several years. I rarely read any Aquaman comic books after that.

I wish this mini-memoir has a more interesting ending, but it doesn't. But it does give you some idea of what I would have done with Aquaman in 1977. 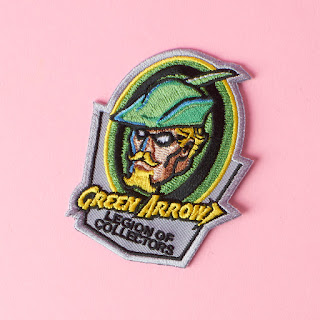 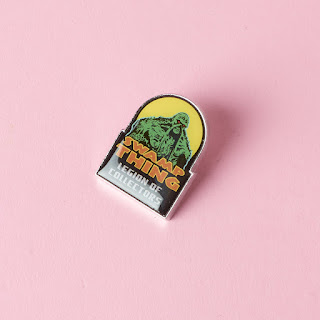 There were two more small items in the “DC Legacy” box. One was a Green Arrow patch. The other was a Swamp thing pin.

That was a lot of wonderful stuff for my $25 plus shipping. You can count me as a very satisfied consumer.

I’ll talk more about subscription boxes at some time in the future. However, tomorrow, I have another installment of our “Rawhide Kid Wednesday” series. See you then.

Posted by Tony Isabella at 6:38 AM