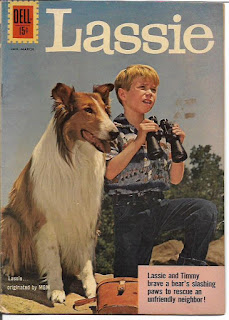 Today’s old comic is Lassie #56 [Dell; January-March 1962]. It’s a standard ten-cent comic book of the period, 36 pages in length (if you count the covers and I do) with almost all of those pages going to editorial material. The indicia does not list an editor.

The photo cover shows Lassie and Timmy [Jon Provost] with the lad holding binoculars with which he is spying on the sexy cheerleader camp below. Just kidding. Come on, this was the 1960s and this was a press photo from a beloved and suitable for all ages TV series.

Lassie was created by Eric Knight in a short story that he expanded to the novel Lassie Come Home. The novel was filmed by MGM in 1943, which led to six additional movies. The TV series made its debut in 1954 and ran for 19 years.

Young Tony Isabella was not an avid Lassie viewer, though others in my family were. Since we only had one TV set, I’d watch whatever was on or go to my room to read. I didn’t seek out Lassie, but it didn’t drive me from the living room. The writing was good enough to keep my interest, the dog was cool, June Lockhart was lovely and Jon Provost’s Timmy seemed like a pretty nice kid.

I met Jon and his wife Laurie Jacobson at Roger Price’s Mid-Ohio-Con and the three of us hit it off famously. I love them madly and wish I saw them on a regular basis. As kind of a lark, I began to collect Lassie comics with Jon on their covers. In typical Isabella fashion, I have no idea how many of these issues I have or how many I still need. Someday I’ll be organized enough to complete my run of the title...and have Jon sign at least some of them.

The prolific Gaylord DeBois wrote the two Lassie comics stories in this issue. This confirmed by his own meticulously-kept records. He also wrote just about everything else in the issue. The two Lassie stories were drawn by Bob Fujitani and lettered by Ben Oda.

The plots of these stories aren’t complicated and they are squeaky-clean. That doesn’t mean they are dull. DeBois didn’t stint on the suspense and tension in writing these tales.

Since these stories have not been reprinted in the United States, I’m going to give you fairly detailed accounts of them. Which means I have to let you know there are...

“Enemy Country” (13 pages) is the first of the two Lassie stories. From the issue’s cover: Lassie and Timmy brave a bear’s slashing paws to rescue an unfriendly neighbor.

The longer version. Timmy is fishing when he meets Williston Tice, a clearly well-to-do youngster who has never gone fishing. Timmy lets him use his fishing pole and “Bill” catches a fish. Their fun is interrupted by Bill’s snobbish mom:

Williston! Williston Tice! Get away from that dog! You know you are allergic to animal fur!

Mrs. Tice calls Lassie a “wretched dog” and tells Timmy that he is trespassing. She bought all the land on that side of the river and will not allow strangers to engage in fishing, hunting or trespassing. She brandishes some sort of long thin walking stick at Timmy and Lassie.

Thinking Mrs. Tice means harm to Timmy, Lassie growls at her. She threatens to have Lassie shot if she ever sees the dog on her land again. Nice lady.

Timmy’s parents tell him that Mrs. Tice is within her rights when it comes to keeping people off her property. Timmy feels sorry for her son, who he thinks is a pretty good sport.

Later that week, Mrs. Tice takes her son fishing. To be accurate, she takes him to watch her fish. From across the river, Timmy and Lassie watch them. Timmy spots a bear behind them.

Mrs. Tice tells Bill to run for the house and tries to fend off the bear with her fishing pole. The bear gets tangled in the fish line. Lassie crosses the river to help them.

Timmy yells that the bear wants their fish and tells Mrs. Tice to drop her basket. But the bear keeps coming.

Mrs. Tice trips on a tree root. Timmy yells for the mother and son to play dead, which stops the bear long enough for Lassie to get to them. Timmy is on his way as well.

Lassie barks at and bites the bear. The collie trees the bear. Timmy and Bill help the injured Mrs. Tice to their home.

Mrs. Tice has mellowed considerably, but still doesn’t understand how things work around those there parts. She wants to give Timmy a cash reward. Timmy declines:

Neighbors don’t take money for helping one another...not in our part of the country! Don’t you see? Lassie or any one of us would take a risk to help someone in trouble without expecting any special thanks!

Mrs. Tice asks Timmy and Lassie to return tomorrow. If Bill doesn’t get an allergy from playing with Lassie, she will let her son have a dog. Lassie barks in approval.

See what I mean about DuBois? This story has a human conflict and real danger. It resolves both in an exciting manner while offering a solid moral code to its young readers and allowing an unpleasant character to find redemption. I love this story.

Next up is “Blaze Makes a Goal” (4 pages). Written by Debois with art by Till Goodan, it’s a slight story about a college student and his horse. Ted plays polo, so, from the get-go, I have absolutely no affinity for him. He and his horse are recruited to search for a bank robber. It’s a yawner.

Dell (and Gold Key) included ongoing features like Blaze in order to qualify for second-class mailing privileges. Apparently, comic books need to have some feature unrelated to the title feature to  get this coveted designation. Sometimes we lucked out and got gems like Brothers of the Spear (in Tarzan). Other times we got Blaze.

The centerspread of this issue, coming smack dab in the middle of the Blaze story, was a house ad for the Dell Trading Post. One of the dumbest promotions ever.

Readers had to cut off the top strip of their Dell Comic covers and send them in - with some cash - to get “outstanding premium values” from the trading post. A regulation football would set you back $2 and five cover strips. For an “initialed slave bracelet” - I am not making this up - you sent three cover strips and fifty cents. Just thinking about it horrifies me!

Did comics fans really go for this promotion? Were countless comic books destroyed in the process? I’d really love to hear more about this. If you have information, please send it my way.

Before we reached the second Lassie story of the issue, we got “Not So Dumb” (1 page). Judging from the uncredited illustration on this uncredited prose tale, a dog digs up some roses with a hoe-wielding man and his friends some distance away. I didn’t read it. I never read these prose stories. I bought comic books for comics stories. If I wanted to read prose, I went to the library. Which I did with such regularity that librarians finally stopped questioning me when I checked out a half-dozen or more books at the time.

“The Prairie Wolf” (11.5 pages) is the second and final Lassie tale in this issue and it’s terrific.

When a college pal of Mr. Martin’s stops by for a visit, Timmy and Lassie take his son Randy on a hike. Randy admires Lassie’s skills at flushing out birds. On their Arizona ranch, his dad raises game birds and trains dogs for hunting them.

Lassie is alarmed when snowflakes start to fall. Before long, the boys are caught in a heavy snowfall. Knowing they can’t make it to his home, Timmy has Lassie lead them to “Old Lige Bailey’s cabin.” As they arrive, they see a coyote enter the cabin through a hole in the bottom logs. They also see that there’s no smoke coming from the stovepipe.

They enter to find the old man deliriously sick in bed. The coyote is by his bedside with her three young pups. There’s a dead but still warm bird on the bed. The coyote was trying to help the old man, who, apparently, raised her like a pet dog.

The boys start a fire and get the old man some water. Timmy writes a note calling for help, which Lassie will carry back to his folks. Meanwhile, the collie has made friends with the coyote.

Lassie takes off to deliver the note. The boys make some hot soup for the ailing Bailey. The old man knows he must go to a hospital, but is concerned that Spunky - the coyote - will think she didn’t take good care of him.

Bailey is also concerned that Spunky will be shot when she is out hunting for food for her pups. Not all the landowners around there are fans of coyotes.

The next day, the boys see Spunky being chased by hounds. They try to hide her in a barrel, but the hounds keep coming until Lassie and Mr. Martin chases them away. They secure Spunky and put her in a grain room. They will also bring her puppies there.

Lige Bailey has a long recovery before him. The question is: what to do with the coyotes until the old man can return home?

Randy’s dad has an idea. He thinks he can train the coyote pups to act as hunting dogs. He’ll take Spunky and her young to his ranch in Arizona...and bring Spunky back in the spring. It’s a solution that works for Old Man Bailey.

This Lassie story has considerable menace for the boys and for the title character. There’s a subtle message about supposedly natural enemies making friends. It has a satisfying ending. Comics writers can learn from this and other DuBois comics.

What else is in this issue? The inside front cover has the black-and-white “Breeds of Dogs: Boxer” by DuBois and Fujitani. The five-panel comics page offers facts about boxers:

The boxer was named for his habit of using his forepaws to begin a fight...must as a human boxer uses his hands.

The inside back cover is “Breeds of Dogs: The Newfoundland,” also by DuBois and Fujitani.

The last page of “The Prairie Wolf” is only half-a-page. The rest of the page is an advertisement for “Tubble,” described as “the new fun bubble soap.” Its spokescreature is Tubby the Whale.

The back cover is a full-page advertisement for the Schwinn 5-Speed Corvette, “the most thrilling new bike you’ve ever seen!” The bike has a suggested price of $79.95. It also has a coupon you can clip and mail to get a free bike catalog. How many innocent comic books had to die for stuff like this?

I hope you enjoyed this look at a fun comic book from the distant reaches of time. I’ll have more of these flashbacks in the future. Come back tomorrow for something different.